Everyone is getting into making panoramas and doing video/time-lapses on their smartphones, GoPros and other small cameras these days – but trying to do them handheld or just stuck on a tripod makes them a bit unprofessional and let’s face it – boring. Polaroid has come up with a couple simple low-cost solutions for hobbyists and professionals alike. 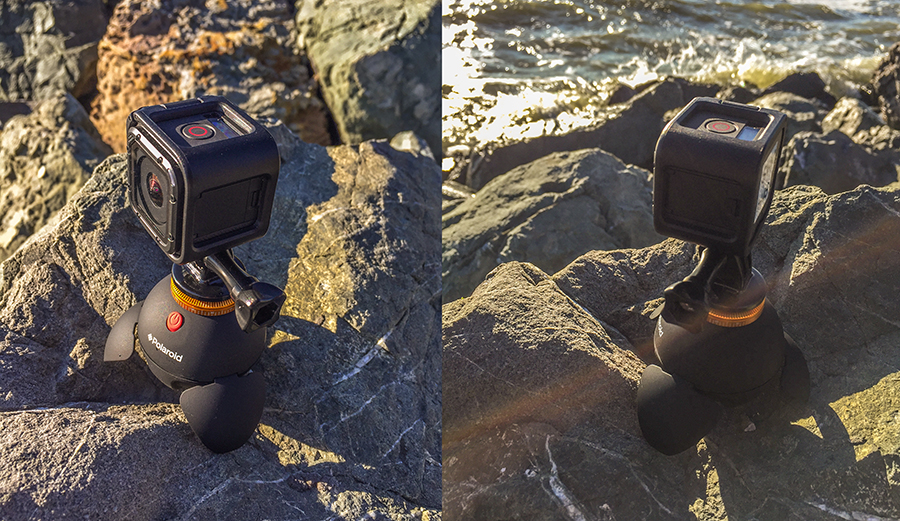 The Polaroid EyeBall Remote Controlled 360 Head for GoPro and iPhone is a small portable 360 pan head that you can use with any GoPro or smartphone to capture video pans or in-device panoramic images.

The kit comes with the EyeBall pan head (the legs fold up to create a sphere in transport), the remote control and two different mounts for both GoPro and your smartphone. 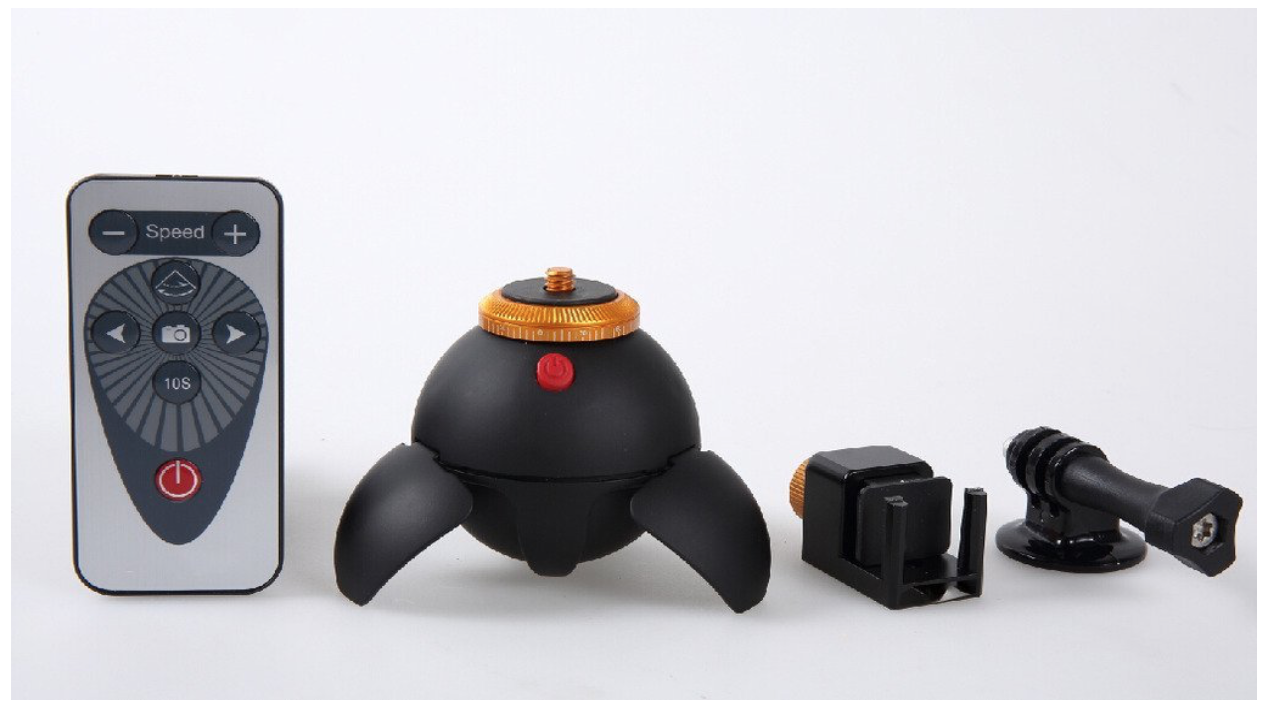 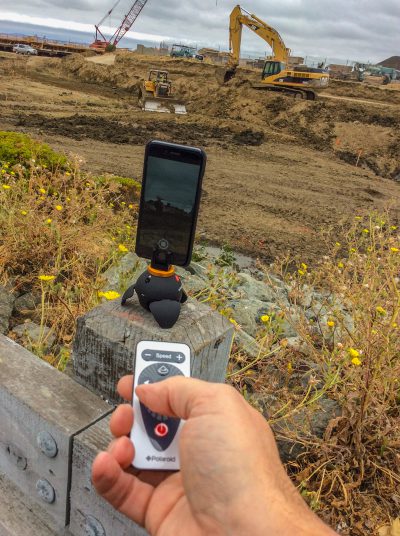 Using the EyeBall head is pretty straight-forward and its compact size makes it really a portable option to just toss in your pack so you can use it pretty much anywhere.

It also includes a 1/4-20 tripod adapter in the base if you wish to use it on a travel pod or tabletop portable.

The legs of the EyeBall flip out from the bottom portion of the sphere to create a mini tripod for a small footprint stabilizer while the top mount is the only moving part that rotates. It really does work well in a lot of different shooting scenarios – but you’ll need to make sure your surface is fairly level before shooting.

The EyeBall charges with a USB cable,but while the unit itself can be turned on/off with a single button, there is no way to manually operate the pan head without the provided remote control. Lose that or forget it at home and you’re toast!

The provided smartphone mount allow you to hold your device either horizontally or vertically – depending on whether you’re shooting a panning video or taking a panoramic photo. It does a remarkable job of shooting iPhone panoramas, as long as your subjects aren’t moving too much!

I tried to use the 10 second time delay feature but could never get my GoPro to coordinate with it for long to create a time lapse. Not really sure what their thinking was on that feature since you can’t adjust it or sync it to trigger your camera. Plus the speed does not go slow enough for time lapse otherwise. I would like to see the speed control go slower overall, but adjusting with the remote it’s still a bit fast.

I have also found that using the EyeBall head for video isn’t quite as smooth as I had hoped it would be. I first had a unit that was sent to me to test and I informed them that there was a slight hesitancy in the rotation when shooting video. They exchanged the unit in hopes that it was just a manufacturing issue, but as you can see in the video below, shot with my iPhone 6, that there is still indeed a slight speed issue while panning. 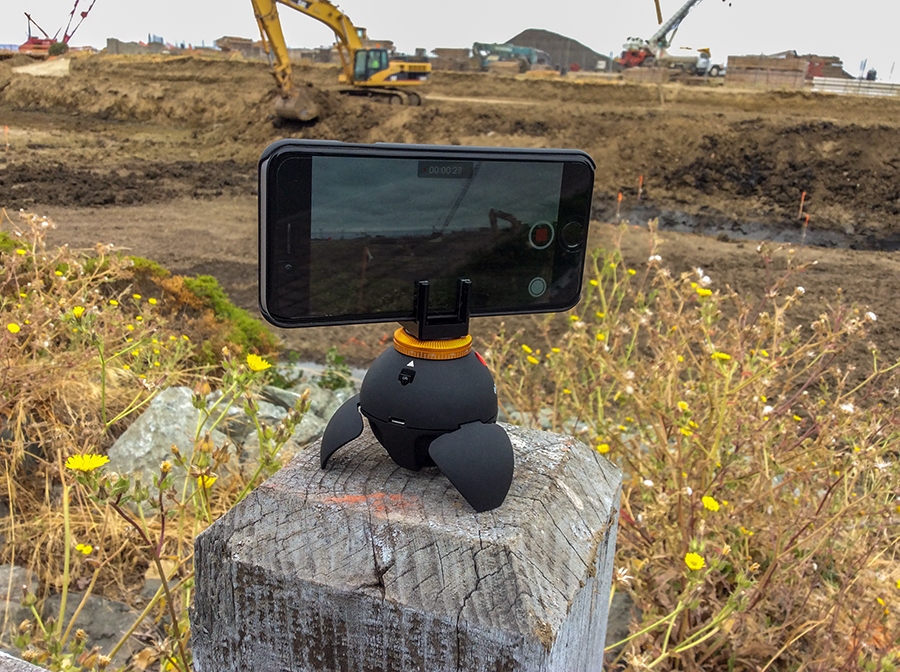 Of course, as a professional videographer, I’m going to come across issues like this and I have to report my true findings. But for the casual hobbyist or average individual that wants to use the EyeBall head for vacations and causal everyday experiences, then it’s really a great tool to do that – especially when it retails on Amazon for just under $50. (just don’t lose your remote!)

I was pleased to receive the Polaroid 360 Electronic Panorama Head to test, as it is really more professional and substantial than I was expecting. So far, I’ve been very pleased with the performance of this pano head for time-lapse shooting and timed video. 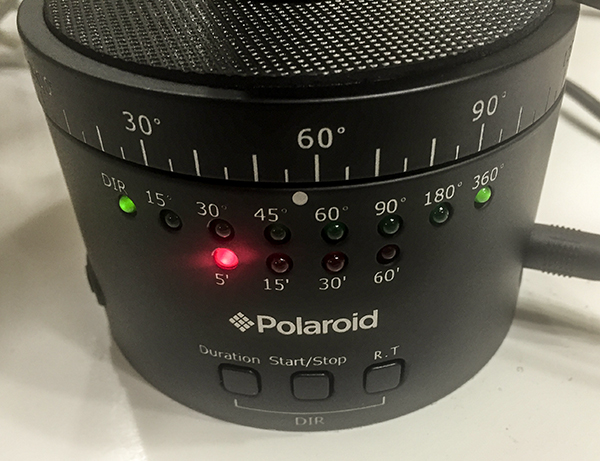 It handles multiple sized cameras either sitting on a flat,level surface or mounted to a tripod through the 1/4-20 thread in the bottom of the base. The unit is heavy and solid so you don’t feel like it’s going to tip over when your camera is attached and is solid to maintain it’s position during long-time operation. 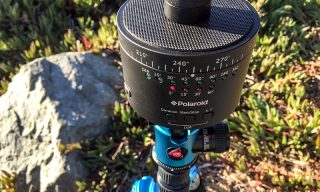 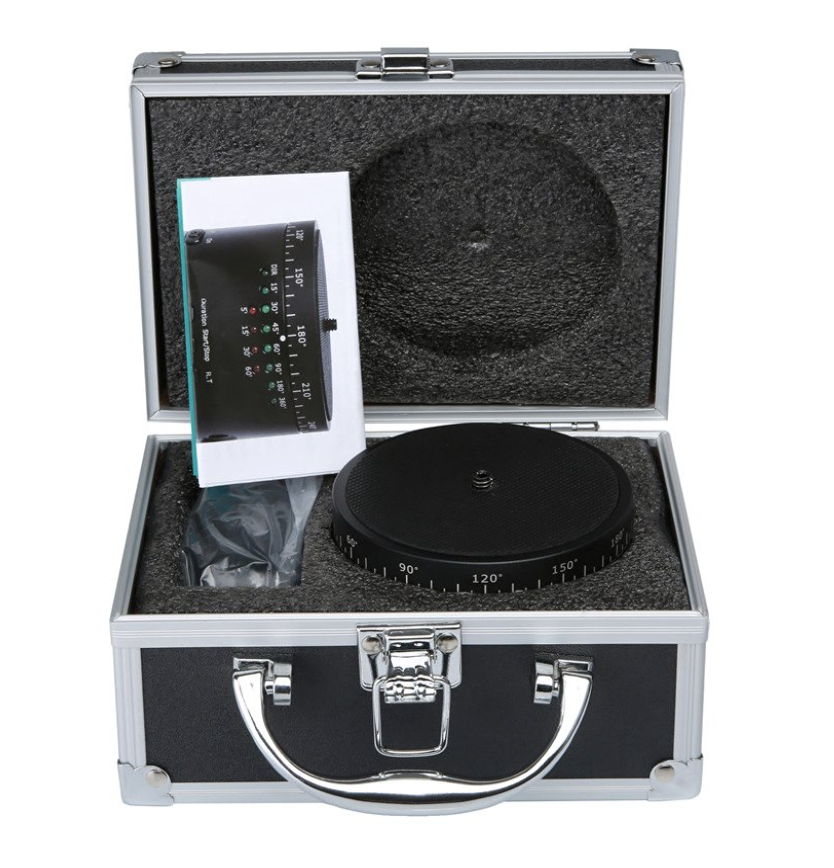 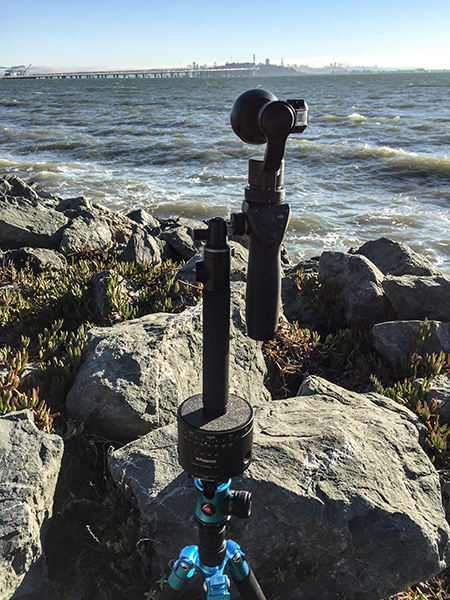 The setup and operation is really straight forward; set the amount of agrees of rotation you wish your shot to be and the amount of time you want it to take to complete that rotation (between 5′-60′) and run.

While this may not be the optimum setup for someone wanting to do a 6-hour tracking shot of the night sky, it’s great for a lot of general use time-lapse shooting.

I’ve used the DJI Osmo mounted on the pano head and it worked flawlessly, while recording in Slo-Mo mode as you’ll see in the time-edited video below. 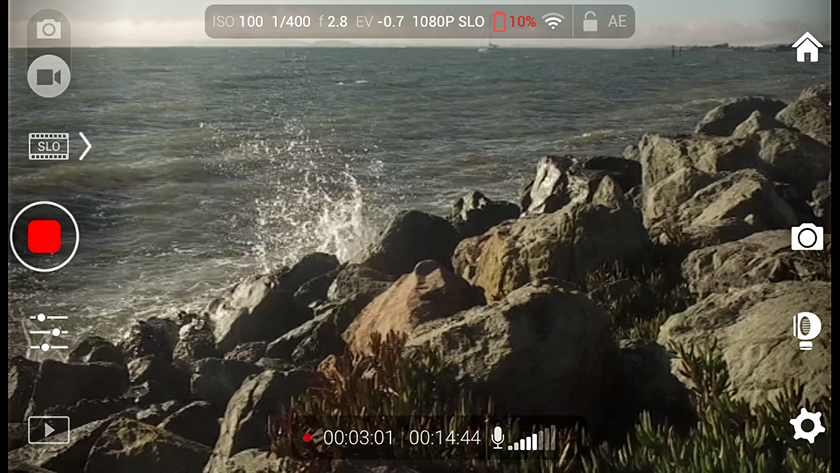 My settings were for 180º in 5′ as I wanted to just scan the bay’s waterfront area and hit the slo-mo timed for the bigger wave splashes.

I’m planning on doing more night-time time-lapse shots with the Osmo in the near future and will update this article as I have examples.

Using the Polaroid 360 Pano Head with other cameras:

I’ve also tested the pano head with the BMDPCC (Blackmagic Design Pocket Cine Camera) to shoot 2-second time-lapse of my wife playing with our palomino, Mysty to see how well it did in another condition – like a dusty arena. 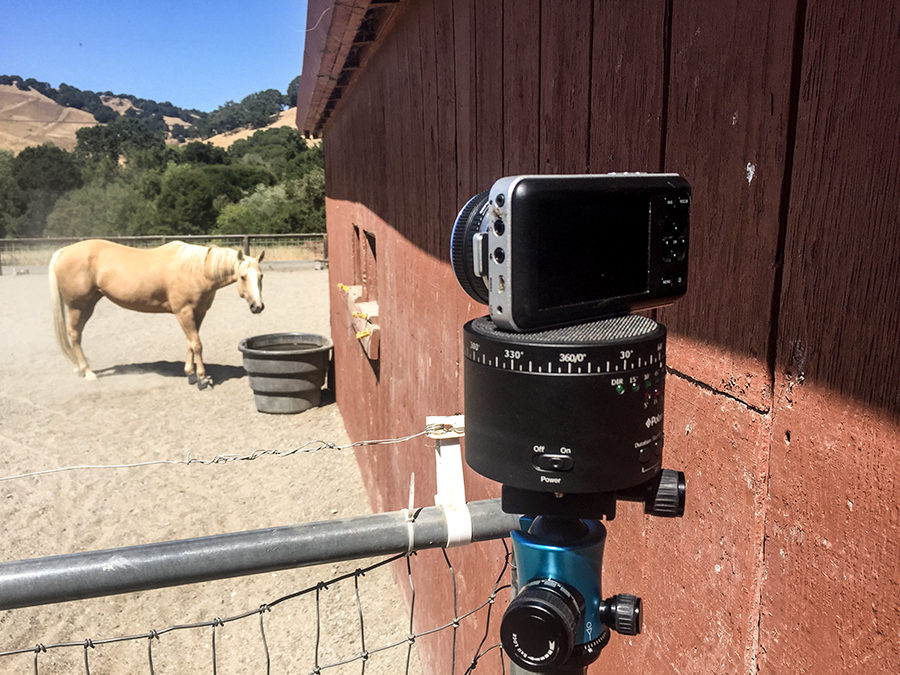 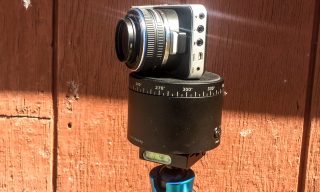 The pano head performed flawlessly even in 97º heat for almost an hour.

I hope to take on more challenges with this pano head with various cameras and setups to shoot more night-time time-lapses and will share here in this article as I have examples processed.

*Update: the Polaroid PR rep gave me the link to order the Polaroid 360 Pano Head on Amazon, but they are currently awaiting a production run to arrive and are out of stock at the moment, so I can’t even give a quote on how much the unit is selling for. At the time of this article, there were no other dealers or resellers carrying this product. 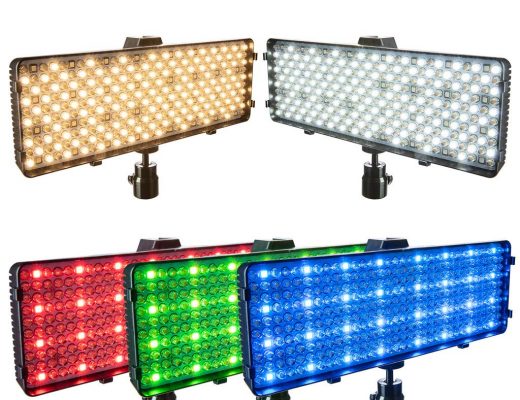 While many pros may consider this more of a novelty than a serious tool, the Polaroid RGB LED Camera/Camcorder... 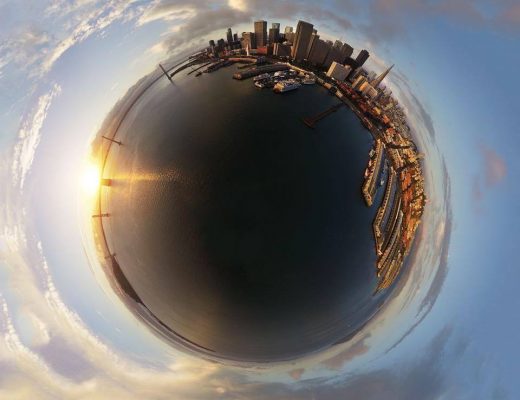 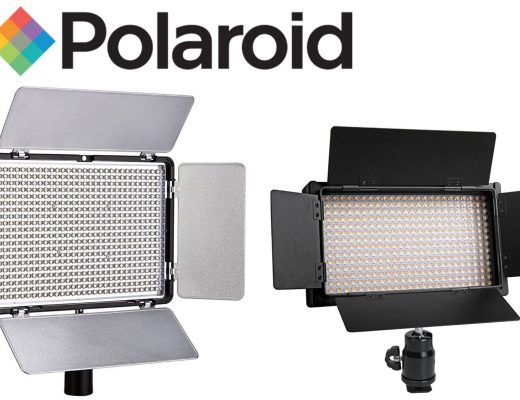 I’ve been testing these small portable LED light panels from Polaroid throughout the year in various types of productions... 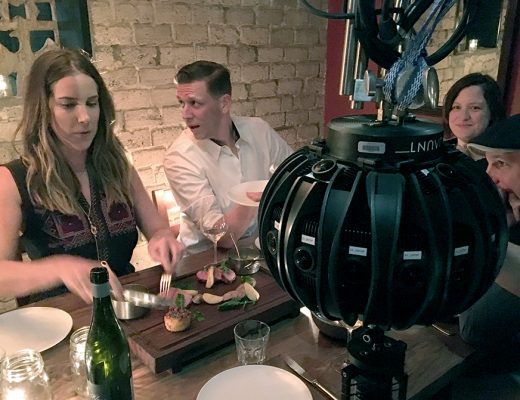 It may seem like creating a 360° video is equivalent to shooting a traditional film, just with a special...