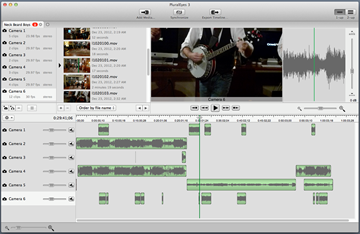 PluralEyes 3.5, the latest update to Red Giant’s automated audio/video sync tool, brings expanded media support, more accuracy, drift correction and more to one of the editing industry’s most popular tools. PluralEyes literally saves hours or even days of audio/video syncing work, by analyzing the audio from all devices and automatically syncing them up with the touch of a button.

“PluralEyes has always been great at taking what came out of your camera and audio devices and making them work together, as is,” said Randon Morford, Shooter Suite product manager. “But there are many issues created in camera that make a sync virtually impossible. In this version, we’ve added a new feature called Drift Correction that allows PluralEyes to actively fix audio/video issues, generated directly in-camera, that can cause an inaccurate sync.”

Drift correction is a new feature unique to PluralEyes 3.5, and a solution to a problem that plagues many shooters. When filming long clips, cameras can lose sync with audio recorders because their recording speeds don't match precisely. PluralEyes 3.5 can fix this.

“PluralEyes has revolutionized the way people work on and off set,” said Bruce Sharpe, who originally created the app for his own projects. “On set, it  makes the shoots go faster by freeing up shooters from having to use clapboards or timecode, or for having to account for many cameras’ limitations. At the same time, editors don’t have to pay for that freedom later. PluralEyes removes the time-consuming process of manual syncing that slows editors down, right before post-production. All around, it lets people get projects done more quickly.”

New to the suite is Denoiser II, Red Giant’s powerful video noise reduction plug-in. Denoiser II gives shooters an essential tool for improving the quality of the video they shoot, especially when shooting in low light or at high ISOs.

The Shooter Suite upgrade also includes tools for bringing older or smaller formats onto your large-format timeline. Red Giant Instant 4K, an update to Instant HD, includes speed optimization (up to 3-4X) and new presets geared towards higher resolution formats. Also, Red Giant Frames, a tool used to deinterlace older footage and convert it to 24P, is included as part of the suite.

This all comes on the heel of Red Giant BulletProof 1.2 – a recent, free update for owners of the Shooter Suite and BulletProof. Red Giant BulletProof is the Shooter Suite’s stand-alone application for reliable on-set backup and review of footage. The free update includes support for AVCHD and Canon MXF, opening it up to a world of new, popular cameras. BulletProof 1.2 also includes a new file reference mode to help drastically speed up the process. And, with the release of PluralEyes 3.5, comes BulletProof/PluralEyes integration, making it easy for BulletProof to hand off files to the popular audio/video sync app.

BulletProof also allows you to export your color grading decisions, on set, as LookUp Tables. Red Giant LUT Buddy, Shooter Suite 12.5’s color tool, allows you to bring those LUTs (and those from many other sources) directly to your editing timeline.

All Shooter Suite upgrade options can be seen here: http://resources.redgiant.com/upgrade-paths/

PluralEyes 3.5 is available now for $199. Existing users of PluralEyes qualify for a $79 upgrade. Learn more at  http://www.redgiant.com/products/all/pluraleyes/

Instant 4K is available now for $99. Existing users of Instant HD are eligible for an update to Instant 4K for $29. Learn more at: http://www.redgiant.com/products/all/instant-hd/

About Red Giant
Red Giant is a software company made up of talented artists and technologists who collaborate to create unique tools for filmmakers, editors, VFX artists, and motion designers. Our company culture is focused on finding balance between work and life – we call it “the double bottom line” – this philosophy helps us ignore complexity in favor of building simple tools that yield giant results. Over the last decade, our products (like Magic Bullet and Trapcode) have become the standard in film and broadcast post-production – with over 200,000 users, it’s nearly impossible to watch 20 minutes of TV without seeing our software in use. From our experiences as artists and filmmakers, we aspire to not only to provide tools for artists, but inspiration as well. Watch our films, learn from over 200 free tutorials, or try our software at redgiant.com.