A few cool things I saw at the show that didn’t fit into any other articles. 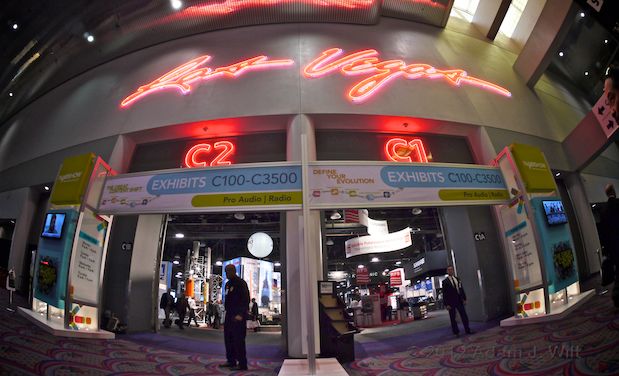 I got this fisheye lens, y’see, and by gosh and by golly I’m a-gonna use it.

NAB is too big a show in too short a time to see more than a fraction of it. I’ve covered a few things in some depth (as have other PVC folks), but there’s plenty more that slips by without proper coverage. Here, I have a few photos of interesting things that I saw in passing, with pointers for more info should anything catch your fancy. 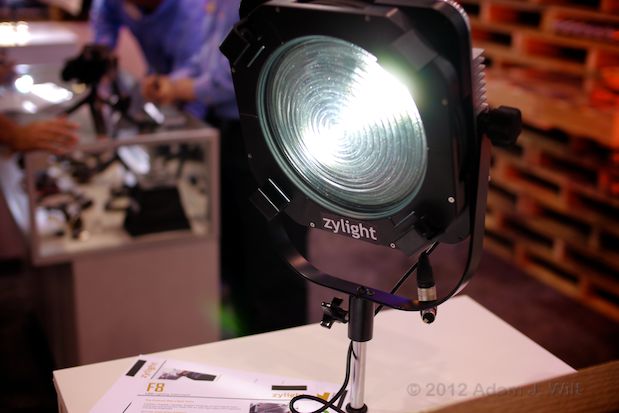 Zylight showed the flattest fresnel at the show, courtesy of a very bright LED (dimmed for this picture). 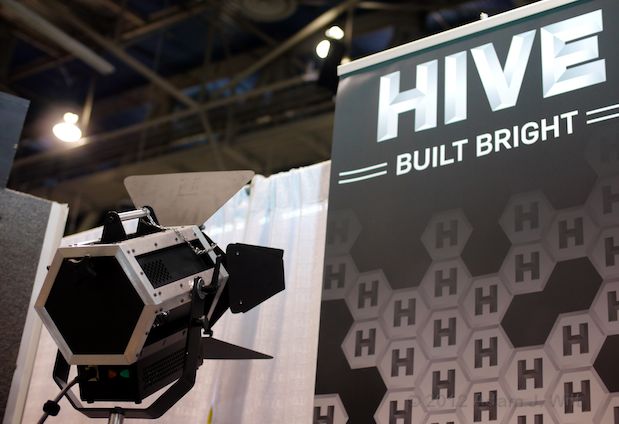 Remember Hive from Cine Gear Expo 2011? This is their “Hornet” plasma fresnel. 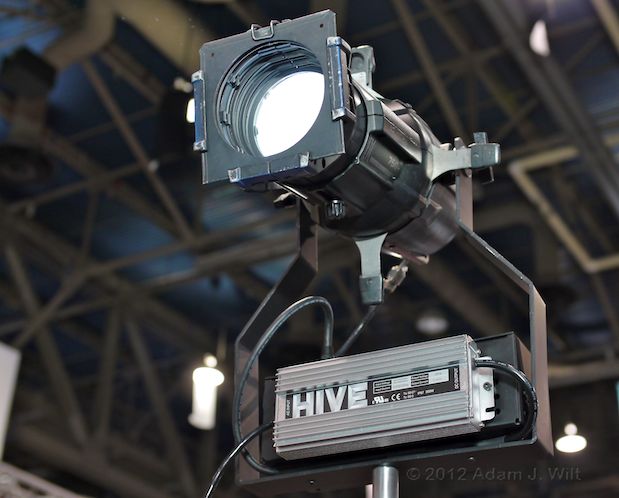 Hive has a nice plasma retrofit kit for Source Fours. 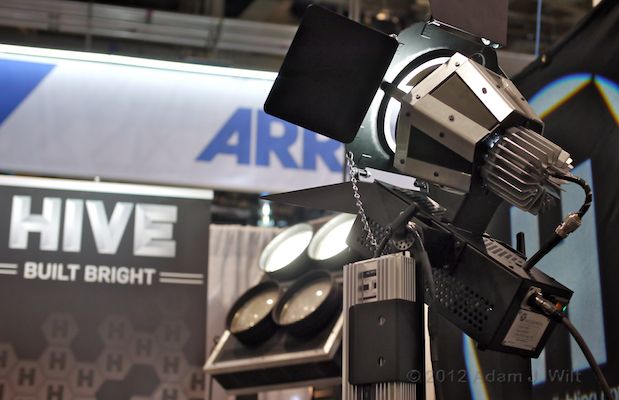 All the Hive lights had been redesigned since their Cine Gear showing. Interestingly, the other plasma light we saw last year, the Photon Beard Nova, was not present at NAB 2012. The Photon Beard folks said that it was undergoing its own redesign and refinement; perhaps we’ll see it at Cine Gear this year, or at IBC in September. 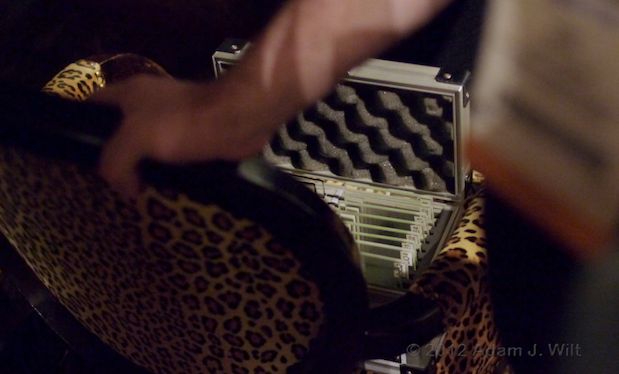 Ira Tiffen brought a box of prototype filters to the CML party on Tuesday night.

Ira Tiffen is retired from the firm of the same name, but that doesn’t mean he’s given up designing filters… 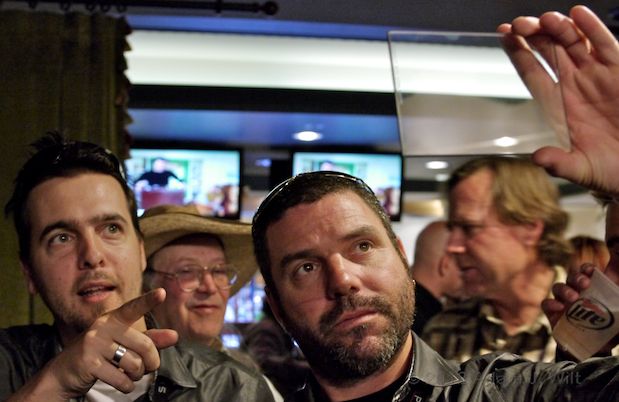 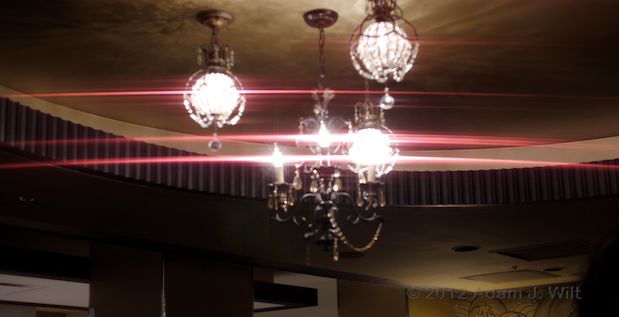 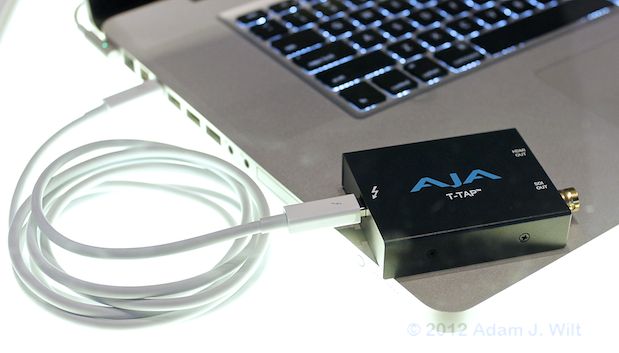 AJA showed the T-Tap, a $250 SDI/HDMI output for Thunderbolt Macs.

Very cool. To see one is to want one… if one has a Thunderbolt Mac, that is. It’s supposed to ship in June. I wonder if it’ll let you load viewing LUTs? 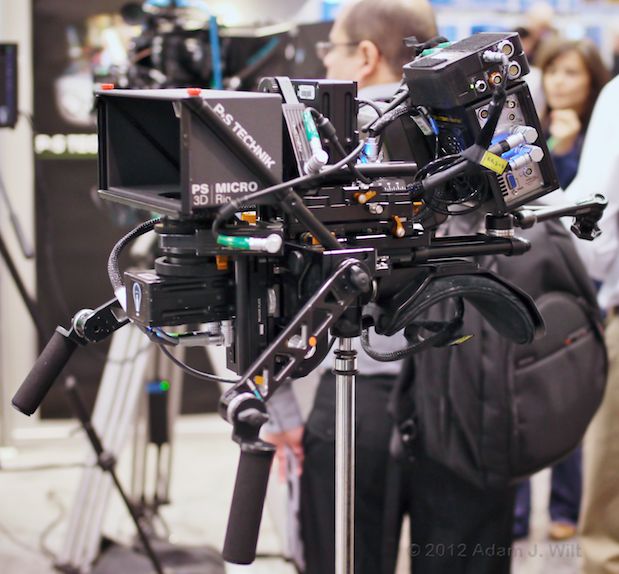 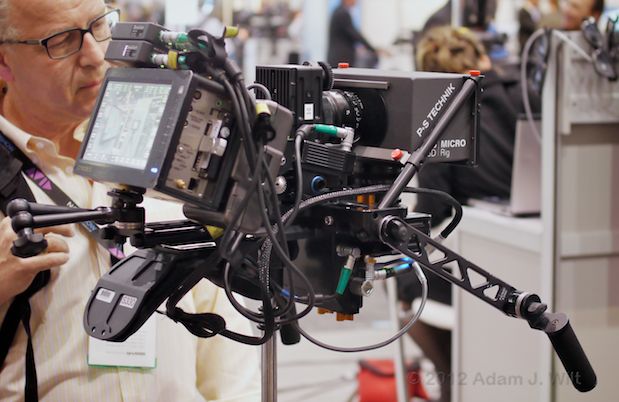 Imagine, a mirror rig small enough to be handheld by normal humans! 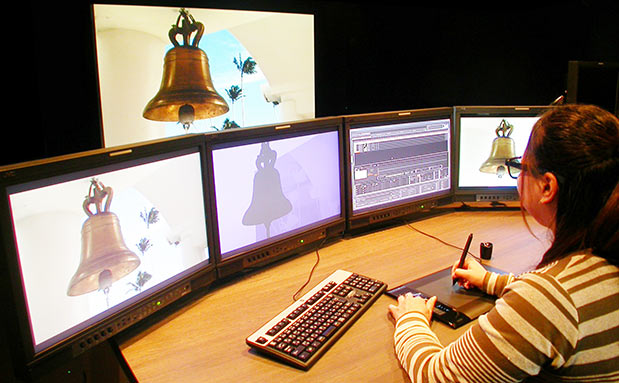 JVC has had an automatic 2D-to-3D “dimensionalizer” for a while now; it works surprisingly well, but it still gets tripped up by things like snow-covered mountaintops (the snowcaps wind up floating in space, having been erroneously “brought forward” by the dimensionalizer). Rather than chase ever-more-difficult corner cases in the code—because, no matter how good the code gets, there will always be something in some scene somewhere that fools the algorithms—JVC Kenwood has developed a hybrid system combining automated and manual conversion: let the machine do what it can, and humans do the rest. This system is being used to convert films for 3D Blu-ray release; “I, Robot” is the first film being converted on the system and should be available later this year. 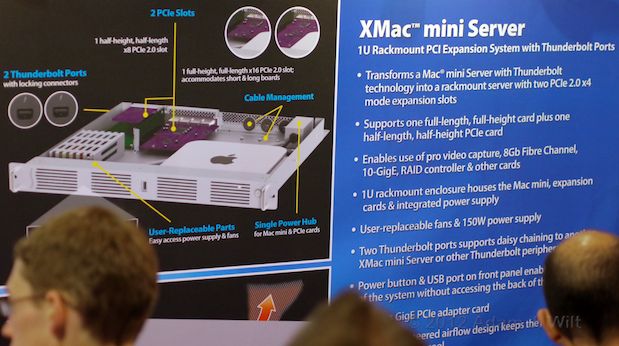 So Apple discontinued your XServe? Sonnet to the rescue! 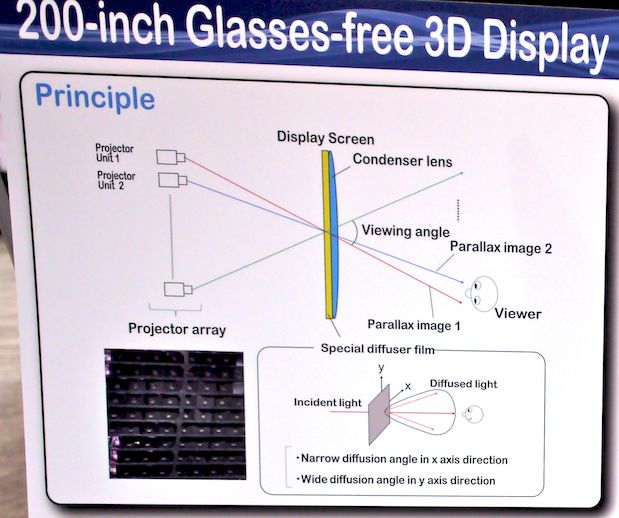 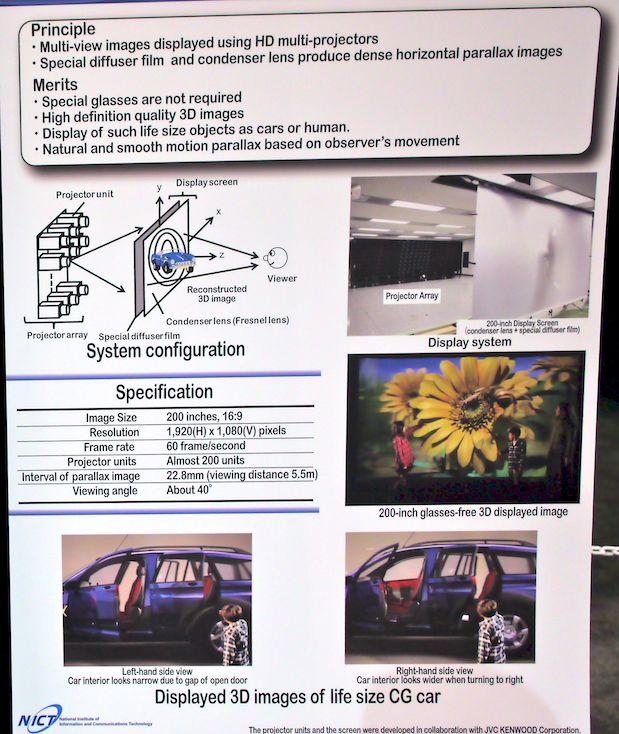 A massive array of projectors displays an equally massive number of angular viewpoints. 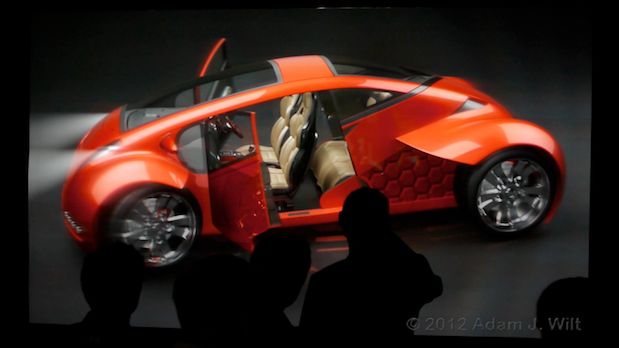 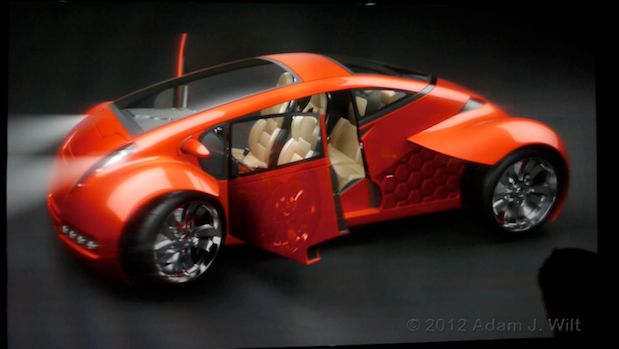 Move off to the side, and you “walk around” the car. 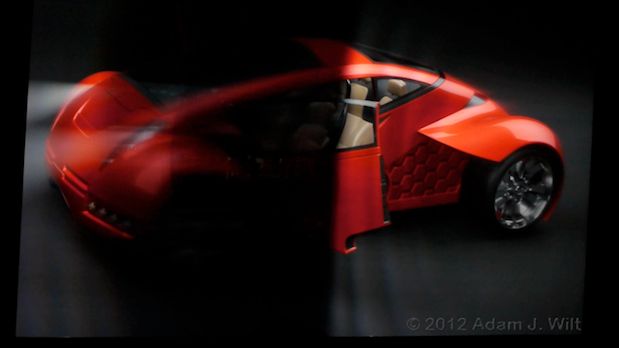 Move too far to the side, and the image starts to decay.

Nice demo, both of the possibilities and the limitations of walk-around 3D. Every incremental change in viewpoint needs its own angle, so it’s not a question of having a mere two cameras. The images displayed were computer-generated; shooting this would require something like a super-sized Camargus array (pix of which can be found here). 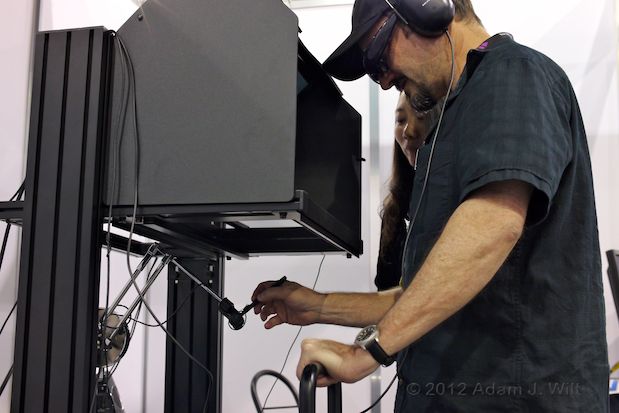 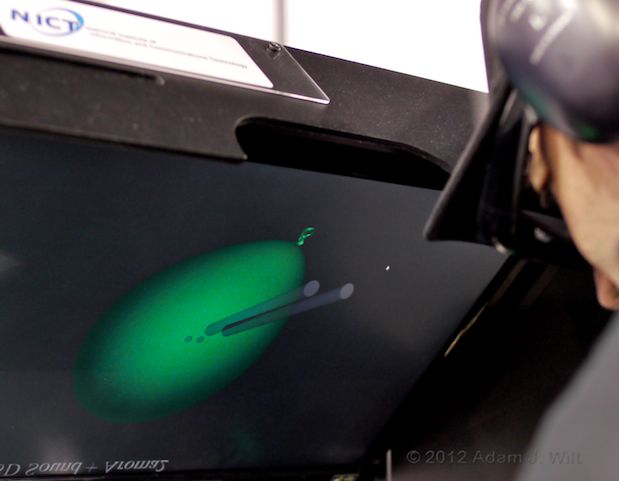 …and uses it to prod and poke a virtual balloon.

The balloon-poking demo was a lot of fun. With the 3D glasses and stereo headphones on, you saw the balloon sitting in front of you. When you poked it with your stylus, you felt the rubbery resistance of it, and heard the impact in the headphones. Rubbing the virtual balloon felt (and sounded) like rubbing a real one… and if you pushed down too hard, the balloon popped! 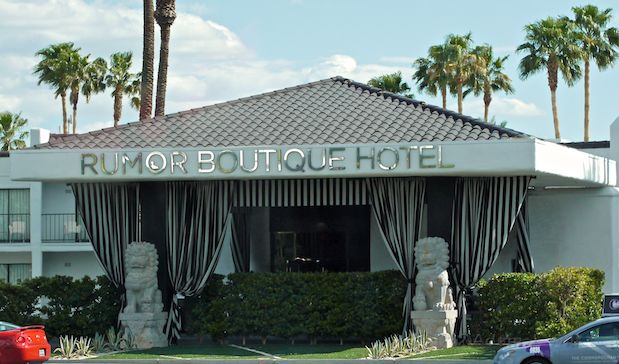 Only in Las Vegas does one find the perfect hotel for the tech industry. 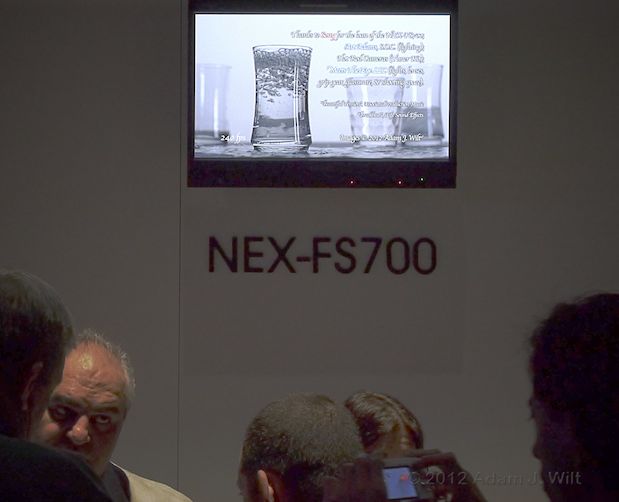 “Fire & Ice” played in the Sony booth and in their 4K Theater. 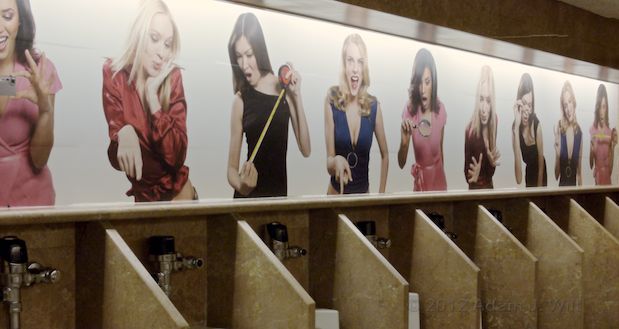 A wall mural in a mens’ room at the Hilton. 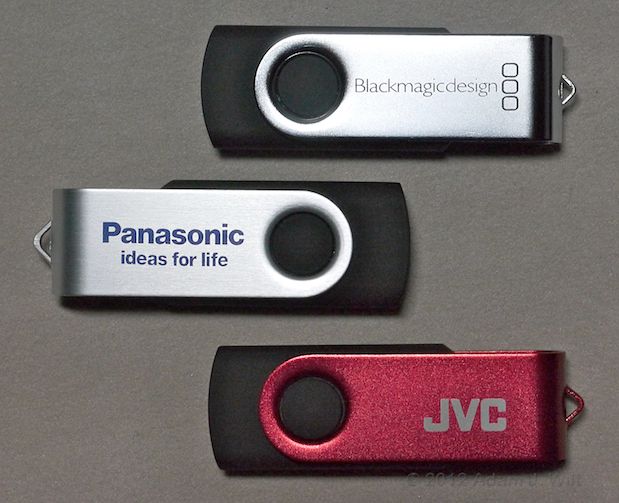 One Chinese firm seems to have locked up the market on USB press kits. 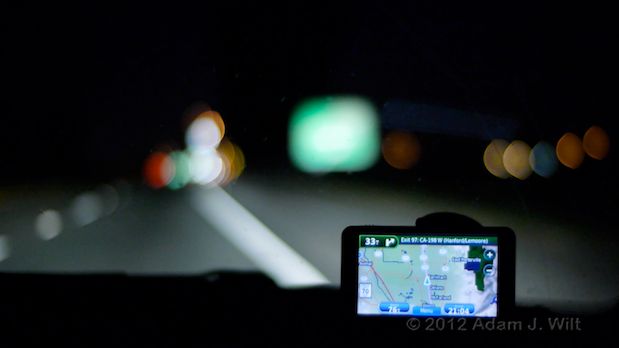 Homeward bound after a long show… 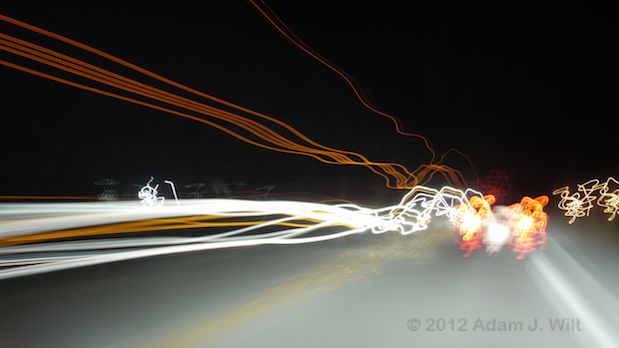 …and after a while it all gets just a little bit blurry….

No, fortunately, I wasn’t driving when I took these shots!

If you’re looking for even more, check out Film and Digital Times’ NAB coverage. Good stuff.