Two new viewfinders to compete with Zacuto and Cineroid, plus a bizarre prototype from Band Pro. 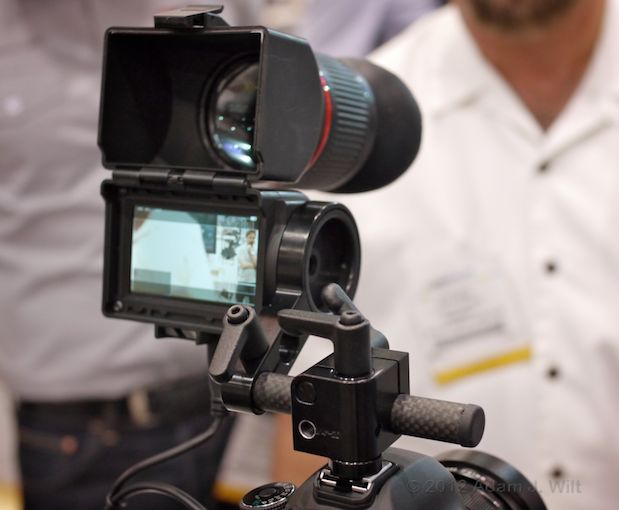 Just when you thought you need only decide between Zacuto and Cineroid for add-on EVFs, NAB gave us two new choices. Also, Band Pro showed their own high-end EVF, and it’s a weird one.

Estonian company Kinotehnik previously gave us the LCDVF, a clip-on loupe turning a Canon DSLR’s LCD into a viewfinder. This year, they showed the LCDVFe, adding the LCD itself, substantial signal processing, and an elegant universal mount. 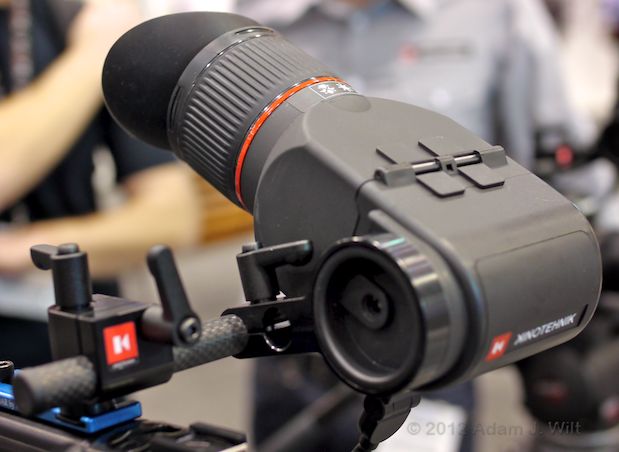 The LCDVFe comes with a carbon-fibre universal mounting system. 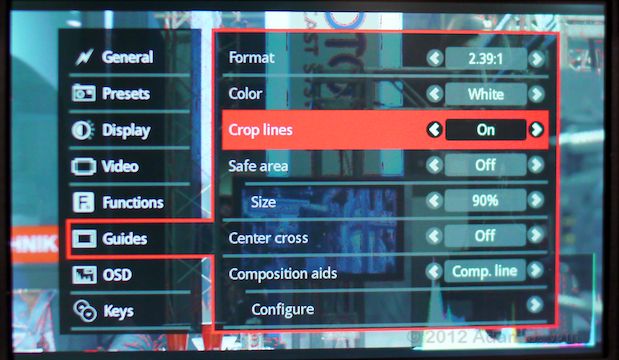 The LCDVFe has an elegant and functionally rich menu system. 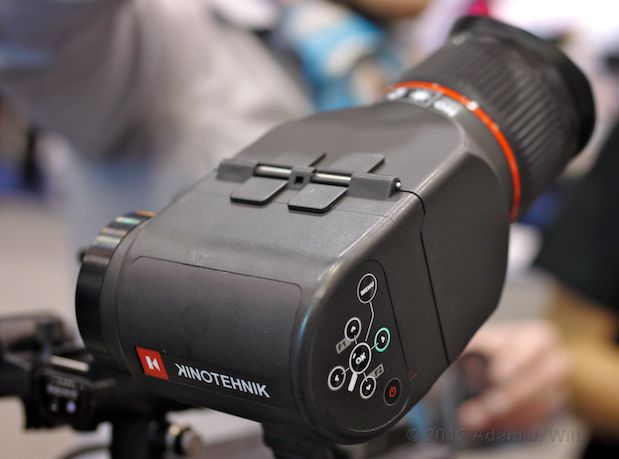 The LCDVFe uses a four-way button array, plus menu and power buttons.

Manios Digital is the US distributor, and the US price will be around $980. Shipping Real Soon Now. 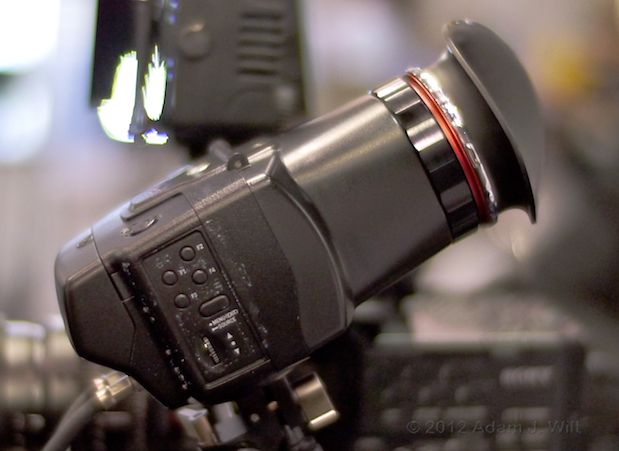 Alphatron’s EVF is controlled by buttons and a scroll wheel. 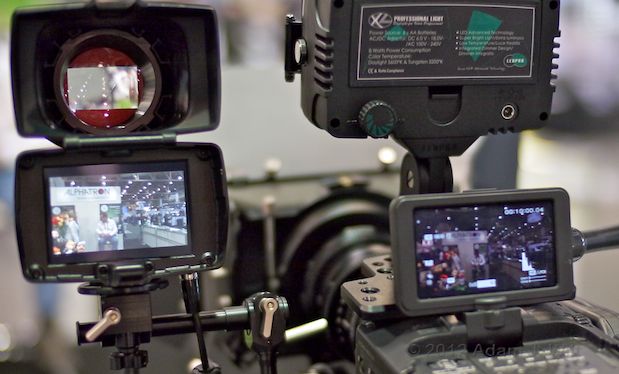 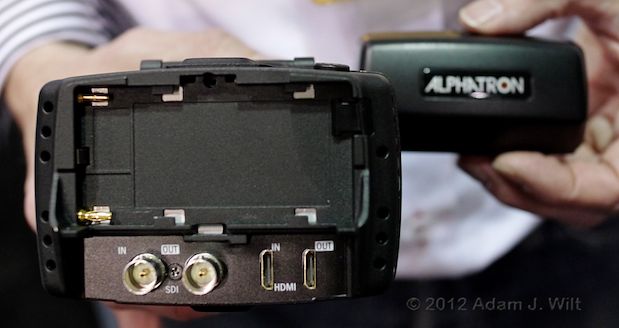 The Alphatron accepts either HDMI or HD-SDI and output the same; it also converts HDMI to HD-SDI if needed. It runs from an NP-F (Sony camcorder) internal battery or from a 6-15 volt external DC feed. In the US, Abel Cine will carry it, probably starting in June, for $1395.

Both of these EVFs use decently-sized LCDs combined with big, bright magnifier eyepieces, so you’ll see a large, detailed image. The Alphatron, with its half-HD-res screen (actually 960×640, the same as a Retina-display iPhone, though only 960×540 is used for a 16×9 image) has a slight resolution advantage, and it’ll accept both SDI and HDMI, but it does cost a bit more.

(Both the Zacuto and Cineroid offerings use 3.2″ screens with 800×480 resolution, in case you’re wondering.) 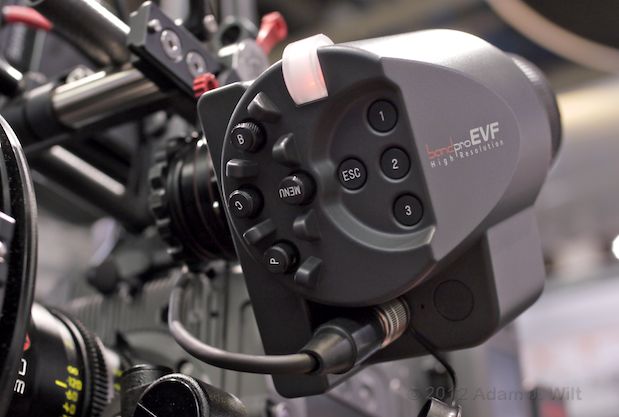 Band Pro is partnering with Astrodesign to build the NewFinder EVF, which uses a true 1920×1080 LCOS panel to show a full-res image.

It’s built like a brick shi—erm, like a tank: a solid metal housing, serious metal knobs (yes, knobs, letting you tweak the picture without menu-diving… just like a real viewfinder!), and the like. A product of the digital era, it connects via analog… to the YPrPb viewfinder connectors of high end cameras like the F65 (a later version will have an HD-SDI option, but analog has the advantage of needing less processing; the NewFinder’s analog feed results in under one frame of delay).

Price will be something like $11,000—steep for us little guys, but competitive with the HDVF-C30W color EVF, Sony’s standard 2.7″, 960×540 LCD EVF for its high-end cine cameras. The NewFinder’s full HD resolution should make focus-finding a lot easier for those complaining that the HDVF-C30W doesn’t resolve enough fine detail…

…except that, at least on the prototype finder at Band Pro’s booth, the eyepiece lens displayed a very small, distant picture, not unlike using the EVFs on the recent Panasonic handhelds. Instead of seeing a big, detailed movie-screen of an image, I found myself peering down a long, dark tunnel at a tiny little picture, a picture so small it could just as easily have been 800×480, 640×360, or less, and there’d be no way of telling the difference.

What’s the point of a 1920×1080 display when it subtends such a small visual angle that you can’t distinguish it from a standard-def picture? I certainly applaud the goal of creating a full-res, truly focusing-capable EVF, but this prototype NewFinder misses the point of the exercise. I can only hope that the eyepiece magnifier on this prototype is not representative of the final product; the displayed image needs to appear about twice as large as it did at NAB if the NewFinder is to fulfill its stated goal.

Like I said, weird. Or am I missing something?