A few of the interesting bits ‘n’ bobs that make cameras usable. 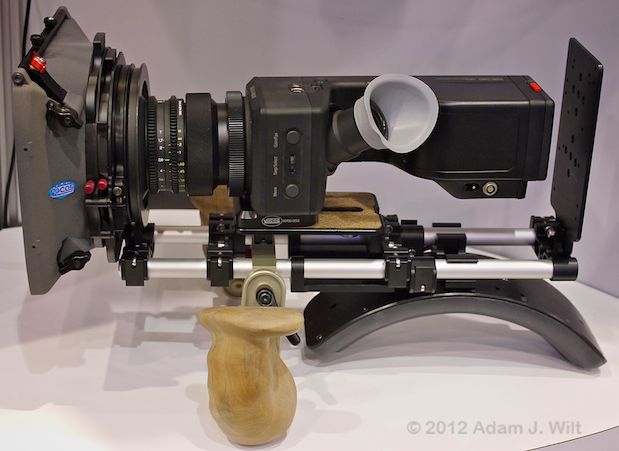 At NAB I found support vendors at the affordable end of the spectrum I hadn’t seen before, comfy Aaton-style handgrips, F65 tweaks by Carlos Acosta, and a “drive-by demo” of a handy zoom/focusing lever.

D|FOCUS Systems and Jag35.com shared a booth. Both companies are creations of enthusiast filmmakers who wound up building their own kit, and Jag35 is one of D|FOCUS’s resellers. 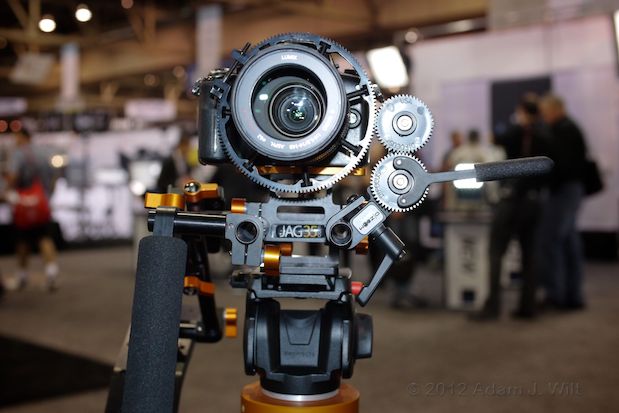 The D|Zoom geared zoom lever on a Jag35 support rig.

This clever lever with its intermediary idler gear lets you zoom (or pull focus) with an old-school lever, without having the lever attached directly to the lens yet moving in the same direction as if it were (that’s what the idler gear does for you). 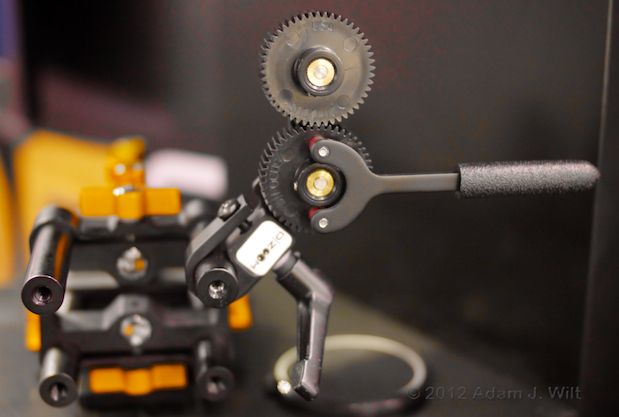 Close-up of the D|Zoom zoom lever.

I didn’t ask, but I bet that if you swing the lever around 180 degrees, and flip the D|Zoom over, you can directly drive the lens with the lever gear, bypassing the idler. That way, if you’re using a Nikon or Panasonic stills zoom that rotates in the “wrong” direction, the D|Zoom will reverse the rotation direction, letting you zoom naturally in the “right” direction for a cine zoom. $175. 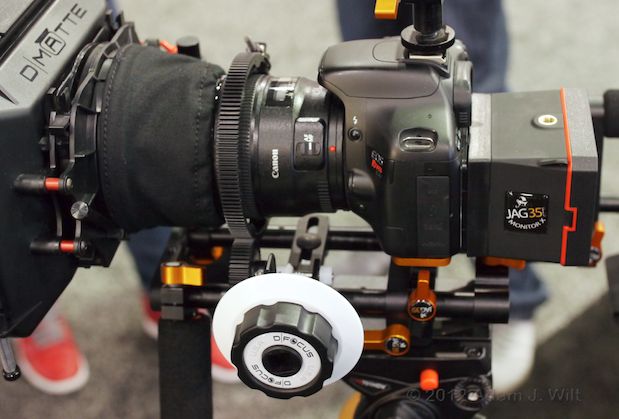 The D|Focus caught my eye as it’s only $140. Fercryinoutloud, that’s less than the cheap Chinese follow-focus I bought last month, and I thought I was getting a bargain. Not only is the D|Focus less expensive, it’s made entirely in the USA. Crikey. 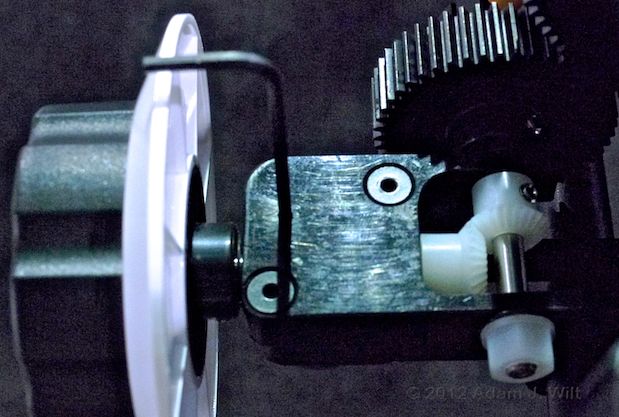 D|Focus: miter gears are adjustable, but will they last?

My biggest concern with the D|Focus is the plastic miter gearing. It’s quiet, adjustable, and lightweight, but how well will it stand up to heavy use? If I attach a whip or a crank (the D|Focus knob has a standard square socket for these accessories) and really flail away on it (as happens when doing fast focus pulls), especially with a draggy lens, how long will those delicate things last? Fortunately, replacement parts are available and field-swappable; I’d probably buy a set of miter gears and carry ’em along, just to be on the safe side (but maybe I’m just a worry-wart; anyone with D|Focus field experience, please comment!). 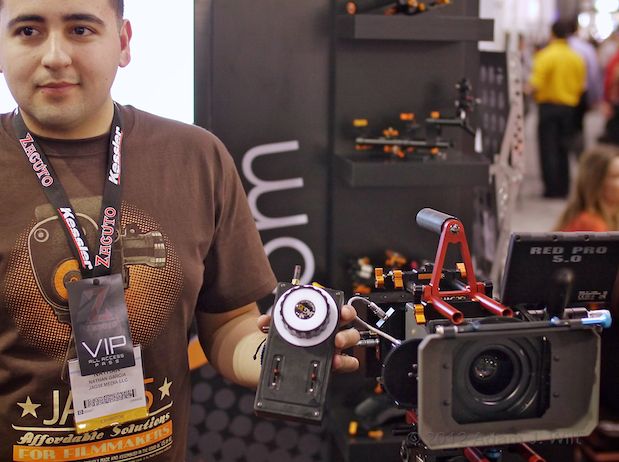 The general rule of thumb when looking at traditional wireless focus controllers like a Preston or a Cmotion is to plan on spending $10,000 per channel. The WEFF V2 is $1400 for a single channel, or $1900 for a two-channel (e.g., zoom and focus) system, including hand controller, receiver, motors, and lens gears. Like I said: crikey. 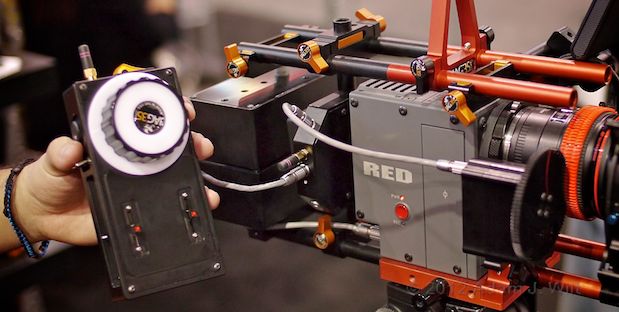 It may not have a fancy readout panel, and it looks like end-stop calibration is a fully manual operation, but it’s not $10,000 either.

The microFollowFocus | blue has high-end features like a quick-release rod clamp, adjustable backlash, and a flippable gearbox, and it also has limit-stops for use with free-spinning or friction-coupled still-lens focusing collars. 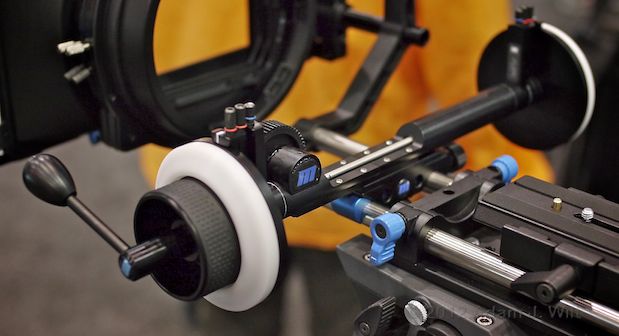 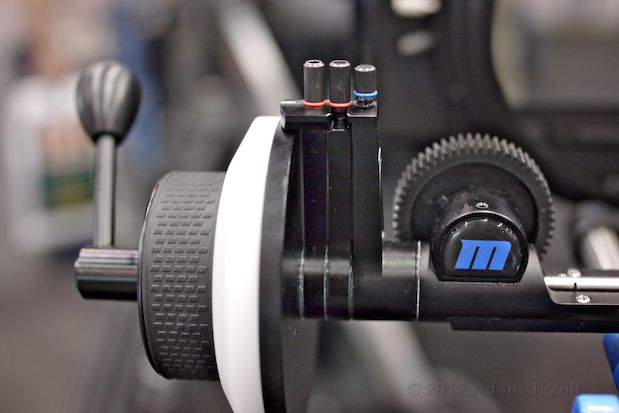 Red-ringed levers are the focus stops, in their “docked” position. 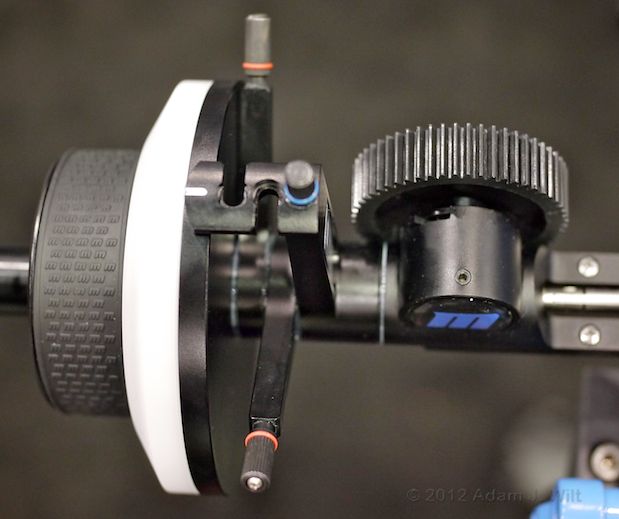 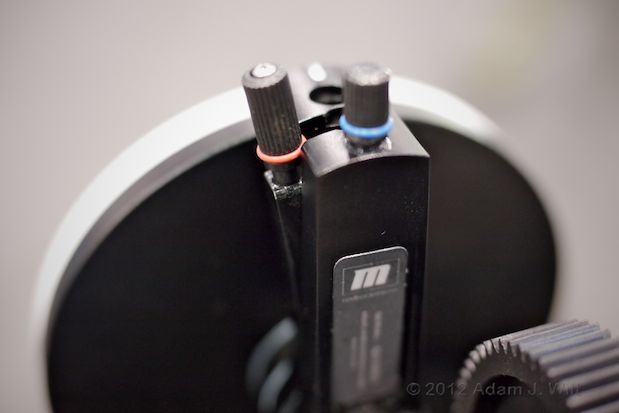 …and now they limit-stop the rotation of the focus wheel.

Wooden Camera also appears to be an enthusiast builder: RED shooters not satisfied with what RED has to offer for support kit. 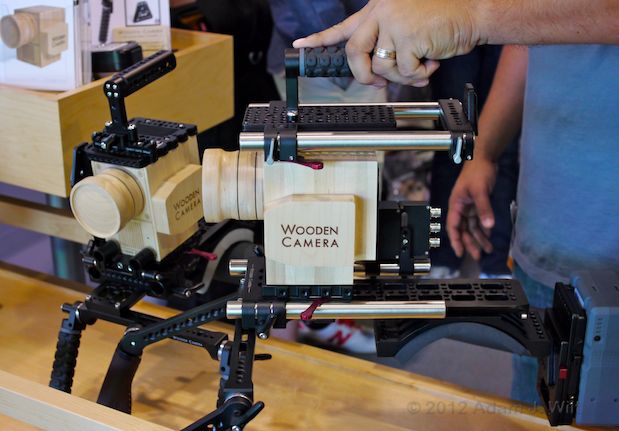 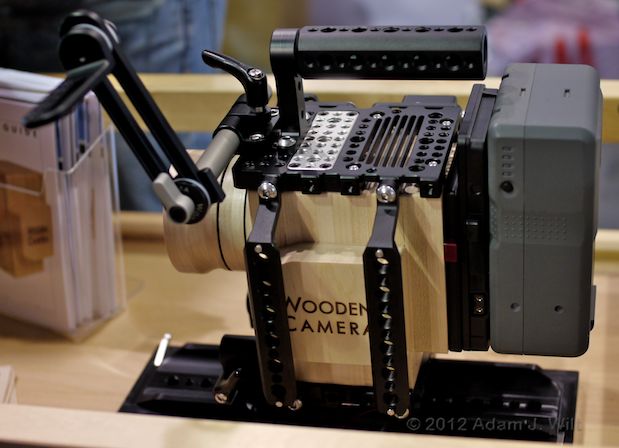 The wooden cameras caught my eye, but that’s not all: their business cards are also made of wood!

Boston cameraman Caleb Crosby started Shooting Machine to make the ShotGrip top handle for the FS100. Now he’s got a black walnut handgrip for the FS100, FS700, and other cameras: the Knucklebunny. 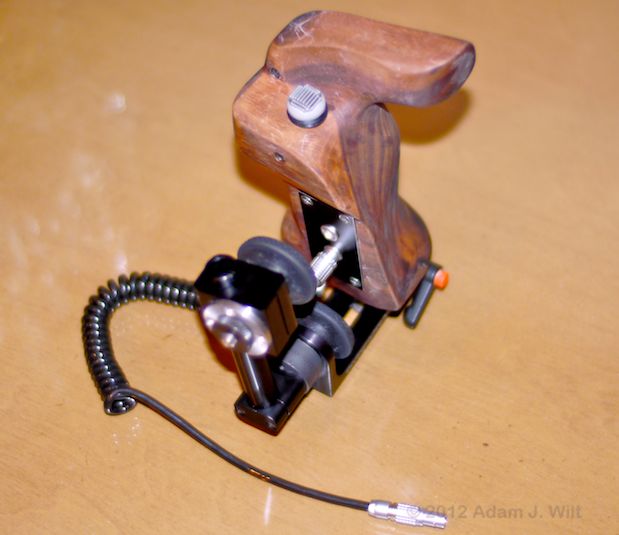 Yes, that’s a four way controller switch from an F-18 fighter jet. There’s also a start/stop trigger with a flip-up trigger guard. Using the controller, you can traverse the entire menu system of the Sony cameras; you can fiddle with just about anything short of the audio-level knobs without taking your hand off the grip or your eye off the finder.

Solid Camera and the F65

Solid Camera‘s Carlos Acosta showed off his F65 add-ons at the CML Party: 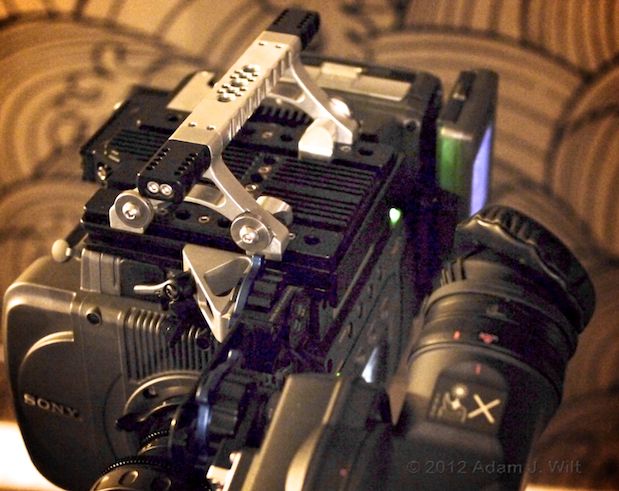 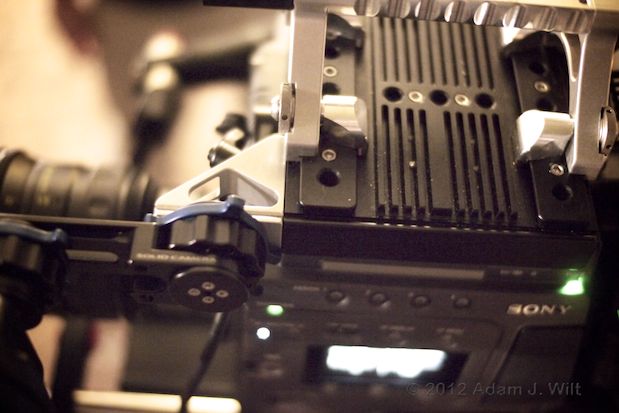 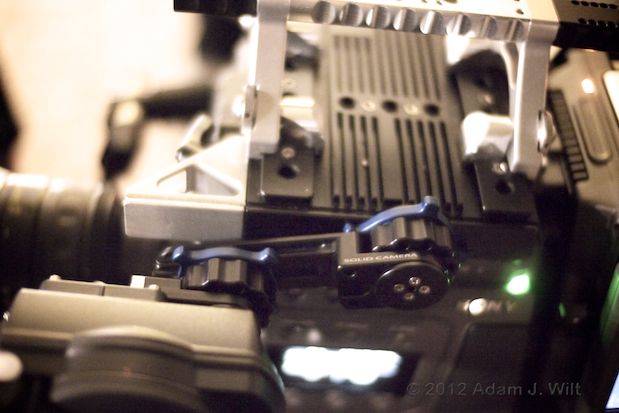 …and then you can slide the EVF arm back along the camera. 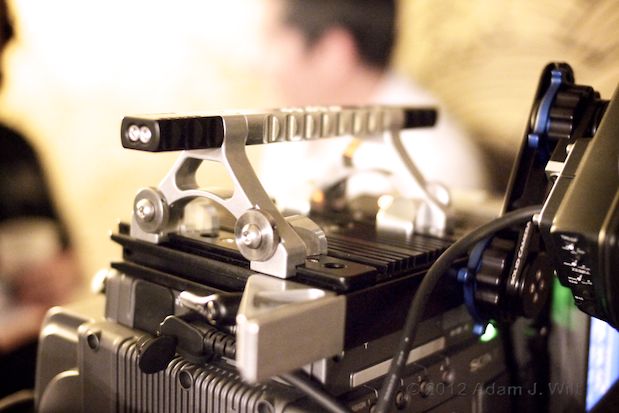 The top handle clamps in place with thumbwheels, and is tapped for accessories. 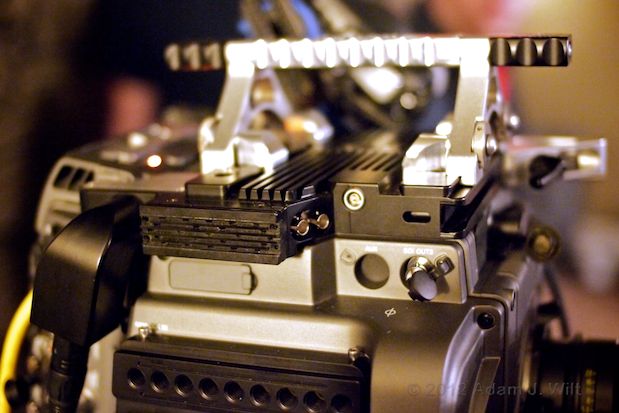 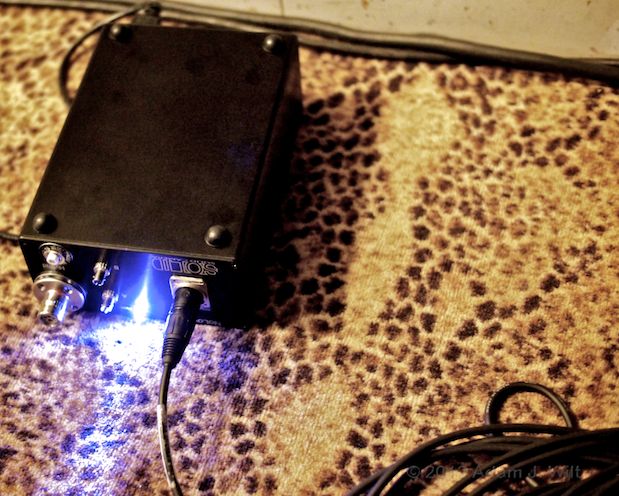 …and that power is supplied over regular mike cable! 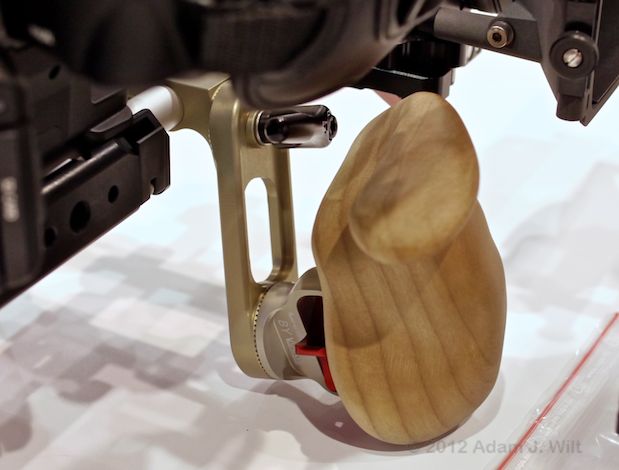 The handgrip is very nicely contoured and extremely comfortable to use.

It’s also available as part of a complete support kit, like this one for the A-Cam dII.

As I was innocently walking through the South Hall, I was accosted by a Polish gentleman, who handed me a brochure and an F-Ring: 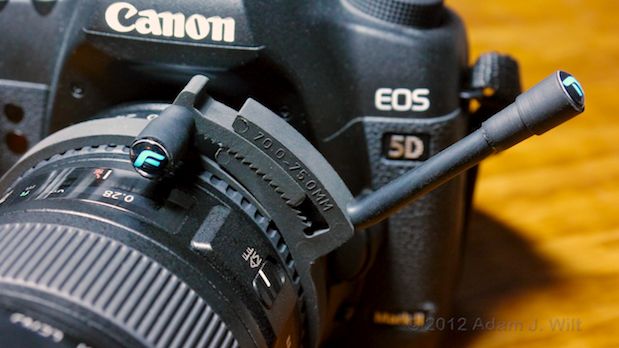 It’s a simple clamp-on focus or zoom lever, supplied with two different lever arms, a long one and a short one (in the photo, the short one is screwed into a keeper socket on the front of the ring). According to Foton, the F-Ring won the medal for “Best Polish Product” at the International Film-Video-Photo 2012 Fairs in ?ód?, Poland.

Sometimes, simple solutions are the best.

Cost? About $33, based on the UK price. Availability? A quick Googling shows dealers in the UK, France, the Netherlands, Portugal, and (of course) Poland, but in the US, you probably have to contact Foton directly.