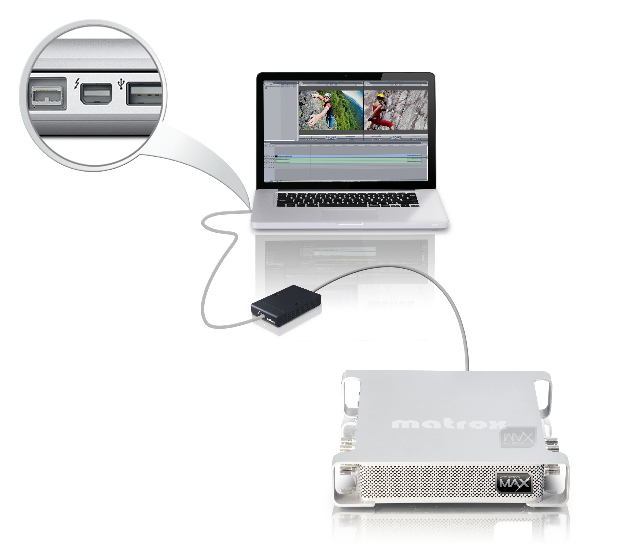 Matrox is the first (and so far, the only) manufacturer of professional audio/video interfaces to offer the possibility of adding Thunderbolt connectivity to any of their existing products which are already in the field. Matrox now offers this capability for any of the MXO2 family of interfaces, which currently include the MXO2 Mini, MXO2 LE, MXO2 (original), and MXO2 Rack. Since almost the beginning of the MXO2 family, all of the interfaces have been available either with (or without) Matrox’s Max option, which performs hardware-based accelerated H.264 encoding from within popular professional video editing and encoding applications, and with a choice of either PCIe or ExpressCard/34 interface to a host computer. As first shown at NAB 2011 and now delivering in September 2011, Thunderbolt is the third available option, allowing connection of any Thunderbolt-capable Mac. This article covers how this works, what it means, and what the upgrade will cost you (or the price of admission if you don’t yet own any MXO2 family interface).

If you currently own any MXO2 family interface, adding Thunderbolt connectivity to it will run you US$199 for the Matrox Thunderbolt adapter, plus the cost of a Thunderbolt cable (currently available exclusively under the Apple brand for US$49). Once you purchase these two items, you’ll be able to connect your MXO2 family device alternatively between Thunderbolt and whichever you had before (PCIe or ExpressCard/34). If you previously connected via PCIe and have abandoned your tower, you could always sell the PCIe card to someone who currently connects via ExpressCard/34 and wants to add PCIe connectivity (or vice versa), and this will help offset the cost of your Thunderbolt upgrade for your MXO2 family interface. All of these options (ExpressCard/34, PCIe, or Thunderbolt) will connect directly with the original cable which goes to the Host port on your MXO2 device.

Special note about the upgrade price: Back at NAB 2011, Matrox had announced that the adapter would cost US$299, but now on their IBC press release, it is listed as only US$199.

Starting from scratch with a new MXO2 family device

An MXO2 Mini with Thunderbolt adapter, without Max (hardware-based accelerated H.264 encoding) costs US$549. To see the differences among all four MXO2 family devices, click here. If you want the Max option, the price will be about US$400 more. Note that the Max option is currently a factory option only, and cannot be added later. If you buy a MXO2 family device now without Max, and later decide that you really want Max, you’ll have to sell it and buy another one. Keep that in mind when purchasing.

Unlike the present situation with Blackmagic Design’s UltraStudio 3D device with Thunderbolt which currently requires a US$495 option to be compatible with the HP DreamColor monitor, all of Matrox’s MXO2 family interfaces are directly compatible with the HP DreamColor monitor, since all of them offer the option in the control panel to output digital RGB over HDMI. This is an advantage for any editor who’d like to edit 2D and make critical evaluation using an HP DreamColor monitor. On the other hand, the UltraStudio 3D offers up to 1080p59.94 throughput, not currently available from Matrox MXO2 products. Currently, the MXO2 family products match the HDTV over-the-air standards, which go up to 1080p29.97, 1080i59.94, and 720p59.54.

Matrox’s Thunderbolt adapter is what’s called an end-point, which means that there is no looping capability beyond the Matrox Thunderbolt adapter. The advantage (in this case) is that being an end point allows it to be bus-powered (no extra power required). If you are going to have a Thunderbolt-based disk array RAID like a Promise Pegasus, then you’ll need to place the Pegasus in the middle of the chain and the Matrox Thunderbolt adapter at the end. Today, this means that you won’t be able to connect any GUI (graphic user interface) monitor on the Thunderbolt bus (or on that particular Thunderbolt bus, since some Macs have two Thunderbolt buses). Of course, you can connect a video monitor to the HD-SDI (device dependent) or HDMI output of the MXO2 family device, but that’s -well- for video, not to display your computer’s GUI. If you are using a MacBookPro or MacBookAir, you’ll certainly have the laptop’s internal monitor as your GUI and that will be it. If you use a 21.5” iMac, you’ll have the 21.5” monitor as your GUI and that will be it. If you use a 27” iMac, then you have two Thunderbolt ports, so you’ll have the 27” as your GUI, plus potentially an additional one from the second Thunderbolt port. If you use a MacMini, then you’ll be able to connect a GUI monitor directly to the MacMini’s own HDMI output. In the future, you will be able to have the capability of adding a GUI monitor on the same bus with the Matrox Thunderbolt adapter, either with a monitor with built-in loopable Thunderbolt, or by adding a GPU to the Thunderbolt bus. This situation is identical with Blackmagic’s current offering, as you’ll see in a related article.