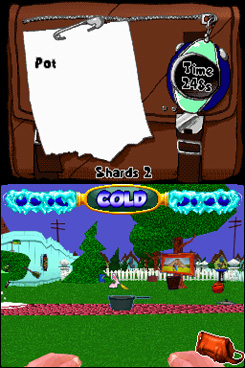 Majesco Entertainment Co., a provider of video games for the mass market, announced two new 3D games–Pet Zombies in 3D and Face Kart: Photo Finish–exclusively for Nintendo 3DS. With Pet Zombies in 3D, players can reanimate their zombies with a range of customizations and then care for or even torment their pets as they play with them in creepy 3D environments. For Face Kart: Photo Finish, players put themselves in the driver’s seat of the arcade-style kart racer; players take photos of their face with their Nintendo 3DS camera and use them as avatars for custom 3D racers, billboards, and power-ups.

Majesco Entertainment offers its Hot and Cold: A 3D Hidden Object Adventure on the Nintendo DS.

Developed by 1st Playable Productions, Pet Zombies in 3D lets players raise their own decaying human pets by managing their special dietary preferences (brains and the like), bodily maintenance (or lack thereof), and morbid activities needed to keep them happily undead.

Players can choose to play with, care for, or even mischievously torment their zombies in creepy locations, such as cemeteries, evacuated malls, or rundown military bases. Each 3D environment is customizable with mix-and-match objects, themed backdrops, and even music to best fit each pet zombie’s personality and tastes.

Throughout the game, players can discover new zombies to add to their horde and customize them with facial bone deformations, variable decay, clothing and unlockable items. Players will also use the Nintendo 3DS accelerometer controls in various activities, including rolling zombie heads through mazes, and can earn trophies and in-game currency to spend in the Zombie Pet Shop.

Developed by Renegade Kid, Face Kart: Photo Finish lets players tilt and turn the Nintendo 3DS to steer their photo customized speedsters through 20 race tracks, as they drift around corners, soar over chasms, and speed past the competition. Players use the Nintendo 3DS camera to snap their own picture and then map it onto their avatar, the landscape, or a turbo boost so they can pick up power-ups as they race. Each avatar offers up to 100 choices in hair, clothing, and eyewear; cars also can also be customized, by tuning and tweaking until the ultimate personalized racer is achieved.

Pet Zombies in 3D and Face Kart: Photo Finish for Nintendo 3DS will be released this fall.