For the last two years the largest innovation in camera support and movement has to be the motorized gimbal. These devices have taken the filmmaking and video industry by storm. It’s hard to find one industry blog or magazine who isn’t talking about these devices. From handheld support to aerial cinematography, needless to say, these devices will continue to grow in popularity and in use. No doubt. the use of gimbals, like with the DSLR movement, will raise the bar in motion imagery.

I had my first exposure to these devices when I was able to observe and handle the Movi M10 at IBC in Amsterdam last year. After a few minutes of walking around with the device with a Canon C300 mounted I immediately knew that gimbal support would be a mainstay in the industry.

So when a collegue of mine, David McKay, asked me if I’d be willing to try out the Defy G5 unit as an introduction to an upcoming workshop in Nashville, I didn’t hesitate to agree to the opportunity.

David came by my house with the G5 to help me set it up and go through the equipment with me. I was a bit overwhelmed by all the parts and details to getting the rig set up and balanced but then I quickly had flashbacks to when I bought my Glidecam X-10 vest and 4000 Pro sled years ago. The hours it took me to get that put together and balanced the first time was also daunting. But once we had the device put together and balanced with my Blackmagic Pocket Camera and Zeiss prime lens mounted I took hold of the rig and instantly remembered the feeling I had at IBC last year. But this time I’d have more time to play! 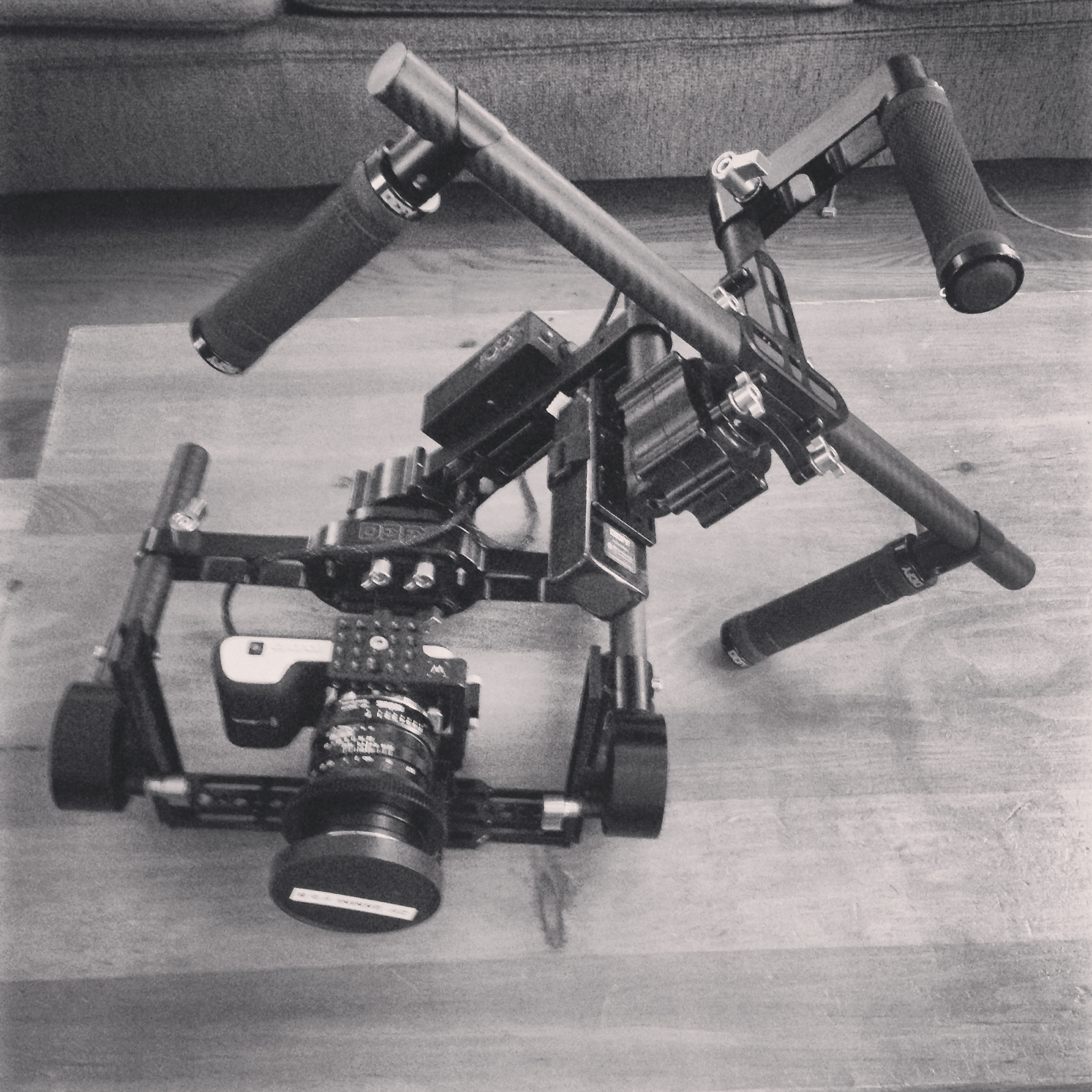 My first impressions: The G5 is very well built. Everything from the handles to the carbon fiber rods, to the camera support carriage, everything was well thought out and well crafted. None of the pieces felt flimsy or like it was an after-thought during the design phase. I quickly understood Defy’s statement: “Built for filmmakers by filmmakers.” Assembly is tool-less so there is one less tool to add to your camera or ditty bag. The batteries and charger are not necessarily self explanatory but after a few times of setting up the charger I’m sure it becomes second nature. But just know, if you hand the batteries and charger over to a PA for the first time to get them juiced up without some explination, you may see them come back with a blank look on their face.

My original plan was to put together a small shoot with a small crew and do a commercial-esque type of test with the device. But with only days to prep I could not pull it all together in time. However, looking back, I’m thankful for that. So the first full day I spent with the G5 I decided to just get use to the device by putting it together and taking it apart. Balancing it and then unbalancing it. I only own a couple of Blackmagic Pocket cameras and an NEX5R but I own a few Zeiss primes and other various zoom lenses so I would switch lenses in order to change the weight of the camera and then have to rebalance so I could get use to all the adjustments.

That afternoon some friends of ours came over for dinner and they have a daughter almost the same age as my daughter so together with my son I decided to take them out to our commons area in our neighborhood and have them run around while I chased them with the G5. I balanced the unit with the NEX5R so I could use the 60p frame rate at 1080p and capture the activity and then slow it down in post to 24p. Here is the results:

Now I will admit there is allot of footage cut out where the unit went haywire on me but I realized after this quick shoot that I had not balanced the unit as good as it could have been. The compression on the NEX is horrible but you get the idea.

The next day, and my final day with the device, I decided to mount the BMPCC again with my Zeiss 25mm and spend more time perfecting the balance. I had skipped an area of adjustment from the previous day which made a world of difference and this time I felt like I had a handle on setting up and using the G5.

My wife and daughter had just returned from dance class and a trip to the grocery store so I decided to use them as test subjects for my next go at filming something worth-while. This time I set up a simple commercial type shoot doing a “one shot wonder” take. I wanted to see how well my setup worked inside moving and weaving throughout the house. Check out the video below for the results (Disclaimer from my wife: Please excuse the mess, I gave very little warning to my wife I would be filming this video!).

By far I feel like the second day I had a better feel for the device. I had enough time to get use to it’s characteristics and motion. It’s not much different than getting use to using a Steadicam or Glidecam Sled but because you support the rig differently it does take some time to get use to.

The following Saturday, Seth and Drew from Defy flew from Phoenix to Nashville to put on the workshop featuring their G2, G5 and G12 devices at Westlight Studios. We got to learn about the company, the team and the technology that goes into the devices. The guys were very thorough in explaining the differences between each model and the optimal uses for each. They then demonstrated how to balance the devices, pointing out the different technique between each model.

After some time with Q&A from the attendees we took a small break and then headed outside so each person had a chance to test out the device. Even in the hot Tennessee summer sun Seth and Drew made sure each person had a chance to experience the devices and field any questions. Seth and Drew were top notch and the love for their product and their craft was very evident. I appreciated their presence and the time they took to come all this way to show us their product line. 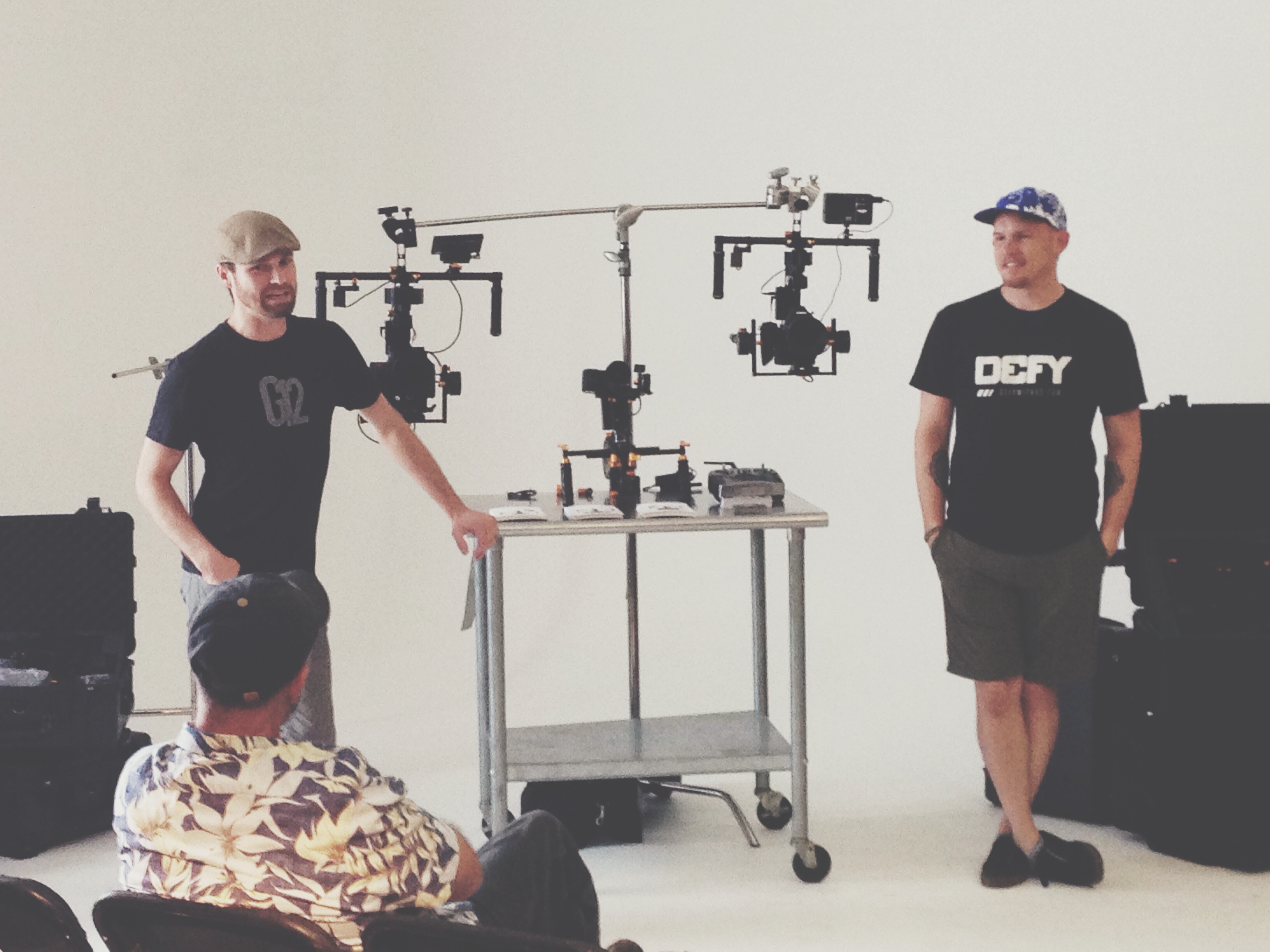 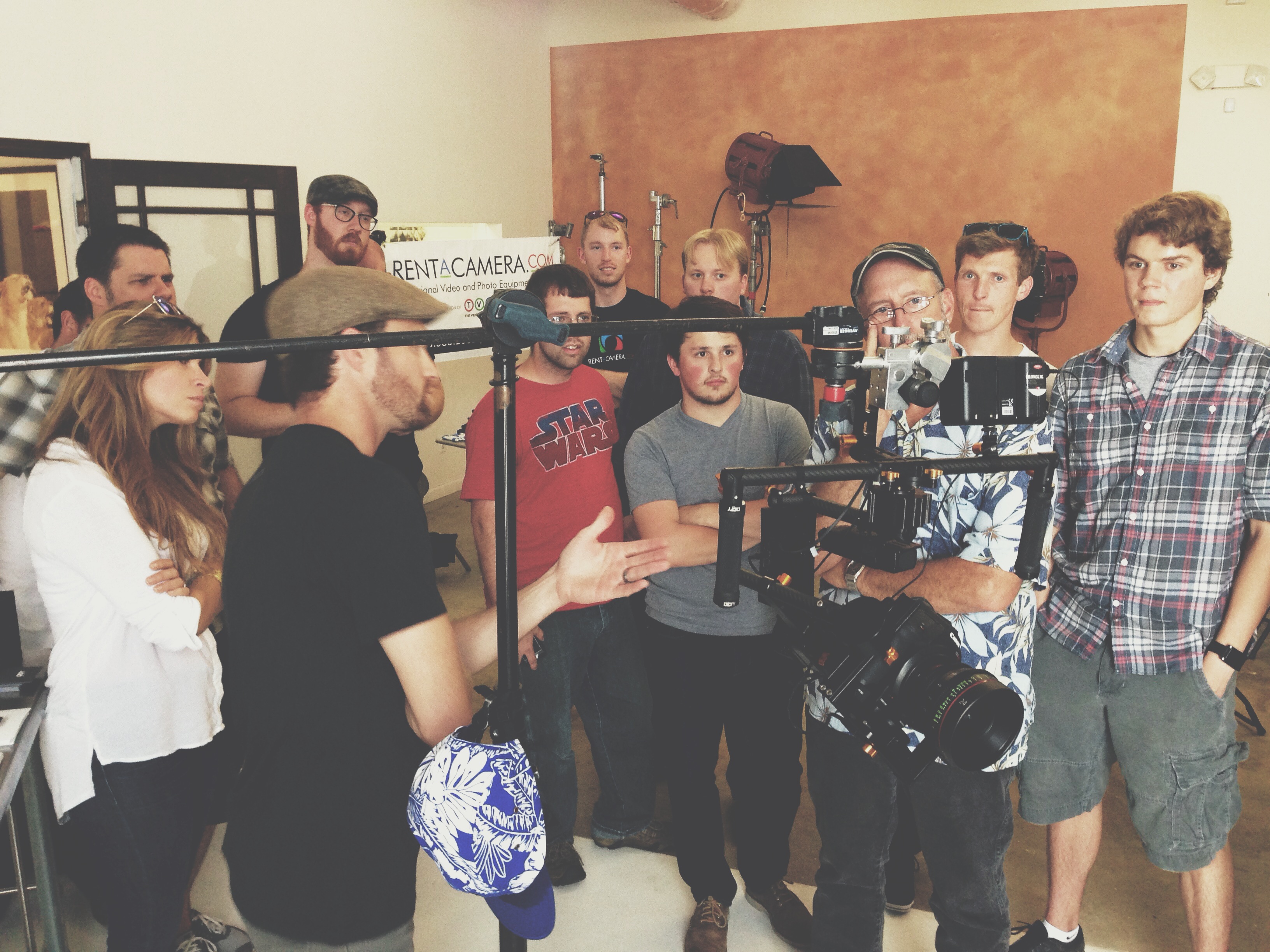 Once the workshop was complete I had a chance to speak to Seth and Drew. It was great getting to know them and to learn that these guys are cinematographers too. Whether you’re creating a PSA, a commercial, a feature film, documentary, their desire is to create a device that will help creatives achieve the look and feel they desire and help their customers in any way they can. They will be the first to tell you that their gimbal rigs are not a “one tool to rule them all” but they are eager to show you just how much range of motion you can achieve with these rigs and how much value it can add to your productions.

Now, before you go on to say that I’m a fanboy for Defy and so on, I will say there were some things I didn’t like about the rigs. Mainly (and I have to admit that it’s similar problem with most of the gimbal rigs I’ve seen so far) the adaptability to upgrade to carry heavier weight. I do understand that this mainly comes to motor size and the support. But on the smallest rig, the G2, you’re limited to only 2lbs for camera weight. Of course you still have a wide selection of cameras you can use such as the GoPro and mirror less cameras all the way up to a Blackmagic Pocket camera and G4. However, with the mirror less cameras and the BMPCC you’re restricted by the type of lens you use. Many of these cameras you have the ability to add on a cine lens or moded lens. However, the lenses themselves (often weighing at least 2lbs) put you out of range with using the G2 rig, you’d have to step up to the G5 at least.

What this means for me is that I love the G2 small footprint and ability to compact down to a small size when traveling but it’s not usable for me when I do documentary work (which the small footprint feature is the most attractive feature) because even though I use those small cameras, I use the cine style glass that it too heavy for the rig. The G5 would work great as an alternative but it’s not as small to travel with as part of your gear. And at a price tag of $2600 for the G2 I wish the smaller rig could carry just a little more weight to give it a bit more of a range when it comes to cameras and lenses. 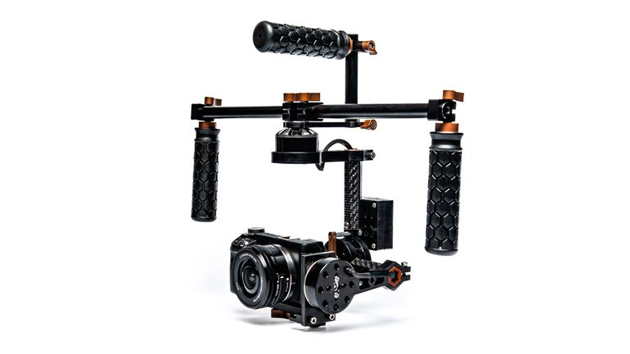 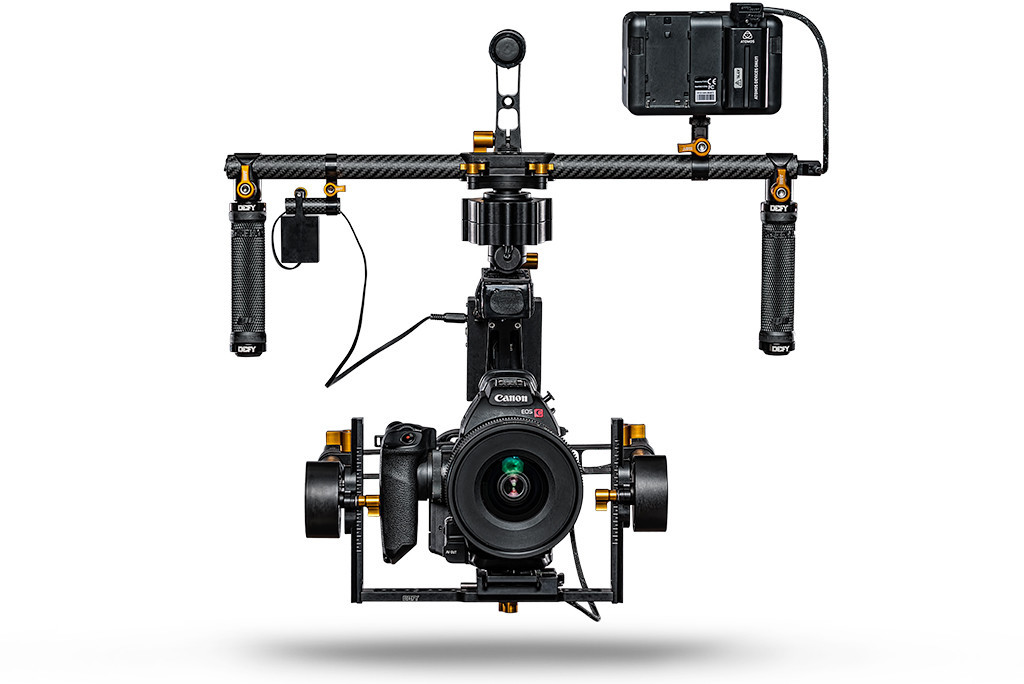 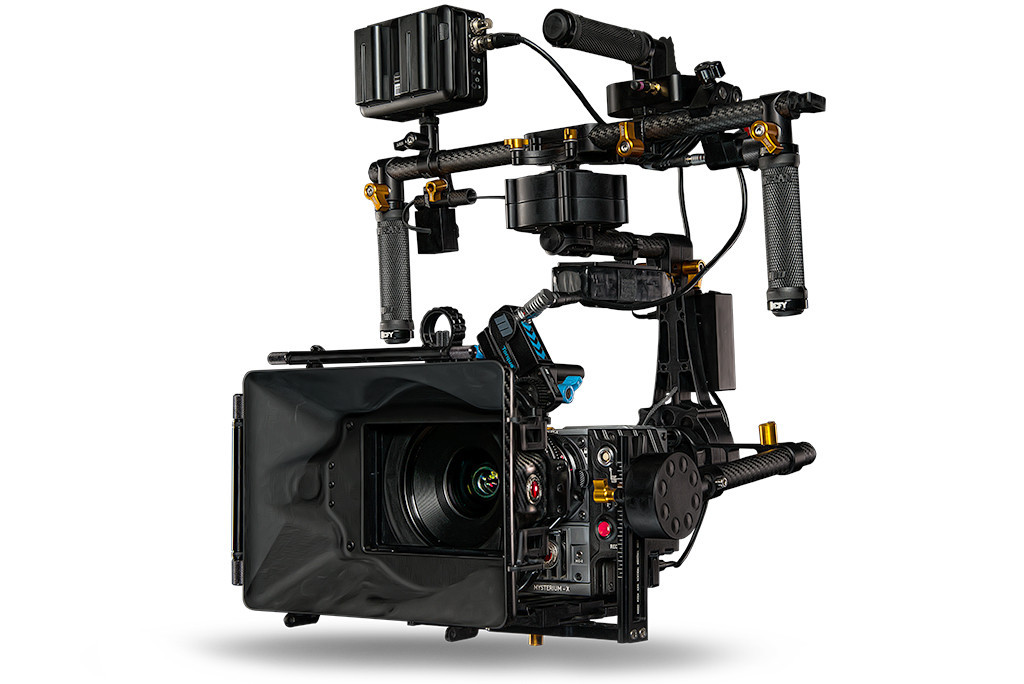 So here are my final thoughts on the two days I spent with the Defy G5 and the Defy workshop:

Pro’s
Excellent Build Quality
Usability Factor (types of moves that can be accomplished)
Made in the USA (For those in the States this is a huge plus, support is just a phone call away)
Company Values (They want to make sure each customer is educated on the device, which in turn makes for a great experience!)
Durability (Although we didn’t test the durability factor, I’ve seen videos where this device gets very dirty and still keeps operating)
Affordability (not the cheapest rigs but certainly not the most expensive. To compare, the Movi M5 which carries 5lbs or less is $5k, the Defy G5 which carries 6lbs or less is $3800)
Adaptability (Each rig, with some 3rd party connectivity, can be used for aerial capture)

Con’s (kind of)
Limited camera and lens range for the G2 for the price (hobbyists and action camera use is great!)
Setup (it’s not a Ready To Use device but with practice the time spent to set up the rig becomes less and less)
Ability to upgrade (you cannot simply add onto the device to carry more weight, you have to purchase an entirely new rig. Not necessarily a problem with Defy but I’m waiting for someone to create a gimbal rig that can grow with you as your camera needs change or alter from production to production).
Battery Charger (not the most self explanatory battery charger but doesn’t take a high school diploma to operate either!)

Please, if you have any thoughts or questions, feel free to leave those below. Have you had any experience with the Defy rigs? Would like to hear from you!