Here's another summary of the last week of news on Adobe After Effects – with more on CS6, new scripts, time-lapses, light arrays, looks, and assorted tutorials and plug-ins new and old.

Innovation in Motion: After Effects CS6 with Steve Forde (Thursday, May 10, 2012 at 10:00am Pacific Time) is one of a number of upcoming Ask a Pro Sessions that you can join.

Fractal Noise 3D, from AE Scripts, makes 3D noise that interacts with After Effects cameras and lights. There are options for geometry modes and an obstacle 3D layer, and you can composite with 3D renders by using a depth map to determine the noise interaction in space. Fractal Noise 3D requires OpenGL 2.0 support; it was developed by the same team that created Za Enchu (Cylinder Plus):

Flomotion shows keying and Liquify in alice in wonderland special effect / resizing a head with after effects:

Learning DSLR Video posted Nikon D800 Night Time Lapse Tutorial, which discusses how to shoot then process the footage in After Effects. For more, see Creating Timelapse Movies in After Effects at AE Portal archive.

“Bending” an extruded shape layer in CS6 from Danny Princz (@rendernyc) notes that in CS6 “You can now bend a 2d layer till it becomes a half cylinder, but the 3D extrusions do not have that option… Depending how far you need to go there are some workarounds.” He shows a duplicated extrusion to make a bend. 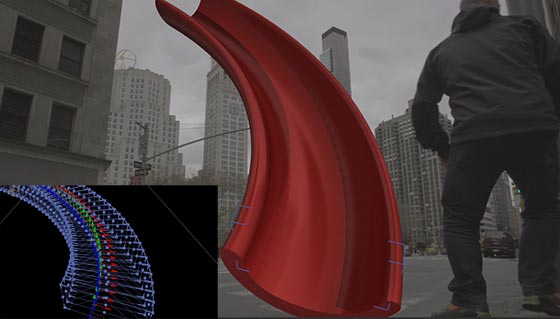 Show A Motion Path With The StroMotion Effect by Blake ONeal shows how to “track freeze frames into a hand-held scene utilizing The Foundry's CameraTracker to achieve an effect that is often referred to as 'StroMotion'. We'll be talking about different methods of how to remove the subject from the background and how to line everything up.”

In Red Giant Quick Tip 64: Creating Light Arrays, Harry Frank shows you a quick method of creating various light arrays in After Effects using Red Giant's PlaneSpace and a free script from David Torno.You can find similar results in the roundup LED and Casino light text effects in After Effects here on PVC.

Zack Lovatt has a new blog, Motion Design & Compositing, to showcase AE expressions and discuss projects and problems, with project files when possible. Topics so far include expressions animating a line between moving points, limiting decimal points, and for / while loops.

Mamoworld posted their 3rd beginner tutorial, Guru Lesson 3, teaching how to use masks and adjustment layers.

In Create a Rotating Counter ONE: Positioning 3D Layers, Andrew Devis shows how to create and place layers in 3D space so that they can be rotated as a single group for a rotating counter animation:

In Premiere RED AE Workflow, Dustin Solomon shows his workflow for a feature film shot on RED, edited in Premiere Pro, and finished in After Effects:

Jeff Heusser added to the chorus (for example, Displaymate) with Just how good is the iPad's color? on Fxguide.

There are good number of intro tutorials by Adobe on on Speedgrade CS6, and now also a proper series for Prelude, Prelude CS6 Workshop by Maxim Jago and Video2brain. Both Prelude and Speedgrade have Adobe user-to-user forums already. Here's Sr. Product Manager Patrick Palmer on what's new in SpeedGrade CS6:

Richard Harrington has a number of sample videos available from his Premiere Pro CS6 course on Lynda.com. Here's one, A More Intuitive 3-Way Color Corrector for Adobe Premiere Pro CS6:

The Edit Doctor tested Odd Sizes and Frame Rates in Premiere 6, using a workaround to make 4096×4096 at 48fps work: