As the second part to my “kicking the tires” test of the new Avid Media Access architecture I wanted to try and understand how AMA works as part of Avid media management. In case this is your first time hearing about AMA, it’s a new way for Avid Media Composer (as well as Symphony and NewsCutter) to access tapeless media. Currently supporting XDCAM and P2 media, the software natively supports editing these formats with no rewrapping or transcoding. It also allows direct editing of XDCAM and P2 media from their solid state acquisition devices as well as that media off of other hard drives. Avid doesn’t have to copy that media over to the usual Avid Media Files folder on local media drives. It is a near instant process when you use the Link to AMA volume command. The first part of this story is available here.

But since Media Composer no longer has to copy imported media to the Avid Media Files folder when using AMA the first thing I wondered was how well would Avid be able to track and manage that media. We have seen something similar with the Import P2 command in Media Composer for a while. That function would allow you to import media from a P2 card for instant editing. Unfortunately it seemed that when you restarted the software after quitting the media would appear offline and needed re-importing again.

I’m happy to say that is seems as if Avid has provided the best of both worlds with this first implementation for AMA. I wanted to try and get an idea of how AMA linked clips would behave when dismounting drives, renaming folders and things of that nature. I unmounted a drive with AMA linked clips and of course they went offline. I would first get the DISK_FILE_NOT_FOUND message if a clip was in the Source monitor: 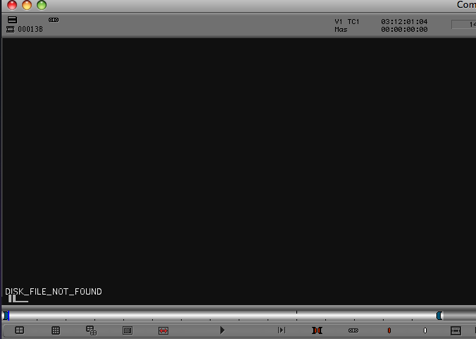 But then a traditional Media Offline screen would pop up on other clips. Once I remounted the disk, a close and re-open of the bin saw all of the clips come back online. I tried varying degrees of renaming the folders where the AMA clips lived and moving then around on their hard drive as well. Sometimes Avid had no problem seeing the media and other times clips went offline. When it did go offline I was able to perform a new Link to AMA volume command and it found the missing media and relinked to the original bin and edits. In those cases the Avid did import a brand new bin so then I had duplicate bins but it was great to see it able to link the original media as well. Another thing I tried was to place AMA clips into an edit and then delete the bin from the project. Of course the clips still showed up in the edit but I couldn’t use the Find Bin command to reveal the master clip (that is without using the Show Media Relatives command in the sequence bin) in its bin since the bin wasn’t there. If I linked to the AMA volume and brought the bin into the edit a second time the Avid was smart enough to Match Frame > Find Bin and reveal the master clip in that bin the second time I imported it.

AMA will also truncate directory names that are longer than 27 characters when importing a volume. I didn’t take the most detailed notes as I tried to trick the Avid into losing the AMA linked media as I dismounted drives, renamed and moved folders and so on but I have to say that the media management seems to be just as good with an AMA volume as it is with a dedicated Avid Media Files folder. I would occasionally get a “not found” error after changing a folder name: 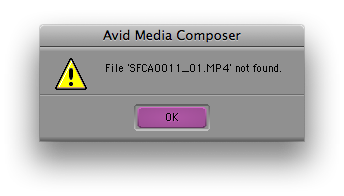 But let’s be honest, you really shouldn’t be changing folder names on your media once you’ve started to edit with it. Not in any non-linear editing application.

Another nice thing about AMA is that it supports and displays a clip’s metadata. You can see this when looking at clip info for both XDCAM and P2 media. 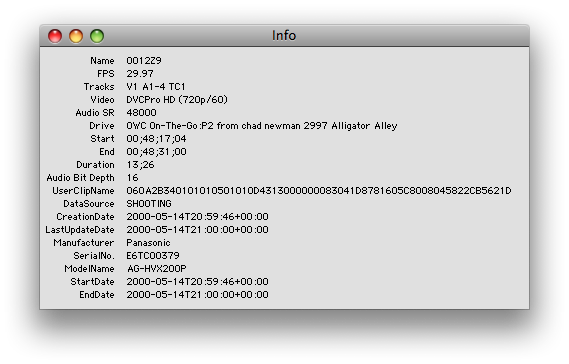 P2 info from an Avid bin. 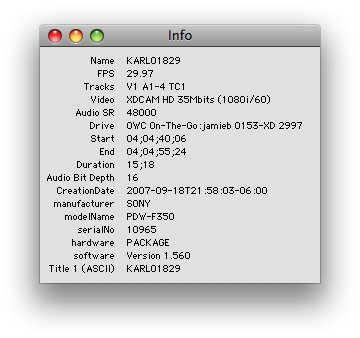 XDCAM info from an Avid bin.

It also adds markers for the start and end point of XDCAM clips:

I don’t work with a lot of XDCAM but I wonder if there are other ways to add metadata to a clip either while the camera is rolling or afterwards that would be supported too? 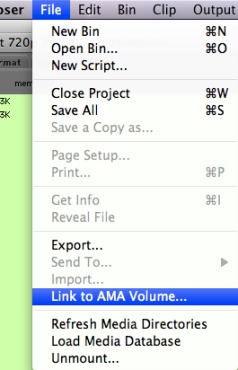 Now that we have seen AMA working with XDCAM and P2 media the obvious question is where does AMA go from here. I’ve said before that when Avid calls it a “plug-in” architecture it says to me that someone should be able to write a plug-in and bam: there is new support added for AMA. I was poking around on my computer in a number of Avid folders and I didn’t see a folder marked AMA plug-ins or anything like that but there must be a way to make it work.

“The current plan is to license AMA SDK to camera manufacturers so that they can write plugins for their cameras. The good thing with AMA Architecture is that we can decouple release of Media Composer from the release of plugins. Any plug-in can be dropped to the running version of Media Composer and it will work seamlessly. Actually for this release plug-in for XDCAM-EX is written by Sony. Having said that we are getting a lot of pull from end-users to make the AMA SDK available, so this may change.”

That’s a very telling comment and one that seems very good for end users. As editors, one of the most frustrating things we face is the constantly evolving world of camera technology and compression codecs. It seems like every spring at NAB (or anytime in between) there will be a new camera introduced with a new codec and it will ship with only limited support from some of the major NLEs. It often seems like the software companies will wait until they have more to add in an update for their applications before adding new codec support. It might just be too much work to update an entire application for a single codec. A plug-in that would allow codec support seems like the perfect way to handle this. If there is an SDK available then a new camera should be able to ship with a plug-in for AMA ready at time of release My question is; what took so long? QuickTime itself has a “plug-in architecture” since QuickTime components can be added for playback of all kinds of different codecs and media. But just adding a particular component to QuickTime doesn’t mean you can play that codec back in Avid or Final Cut Pro. But if you can play a codec in QuickTime player then it stands to reason that you should be able to (for the most part, remembering that some codecs are really intended for things like delivery and not editing) drop that file into an editor and play it back there too. If Avid does open this AMA architecture where any Tom, Dick or Harry can write a plug-in and support a codec then that would be revolutionary indeed. And I hope it would mean that support for new formats in Avid could happen at a very quick pace. Obviously if anyone is writing plug-ins for it then there is the chance that they could really screw something up but the functionality that this could add is exciting and I for one can’t wait to see what lies ahead for Avid Media Access.

Harbal also explained AMA’s relation to Avid media management a bit better.”AMA clips have same functionality as any other clip present in the “Avid MediaFiles” folder. We treat file-based camera volumes as an extension of MC but indicate [to the] user it is unmanaged media by highlighting it in yellow. For a difference, you can not delete media files present on the volumes from inside MC, only deletion of Master Clips is allowed.” This was welcome news to hear from an engineer and it made perfect sense after I tried to trick the Avid into losing some of the AMA media I had linked to. He also confirmed that using the consolidate command is the current way to move media from an AMA volume to your media drives. Consolidating has always been the way to move media on Avid so it makes sense that it works with AMA as well. I had heard that you could just drag a yellow AMA clip to another bin and it would copy the media to your media drives but this isn’t true. One suggestion I made was to have a “one click” type of way to move AMA media onto local storage. While the consolidate command is a good one in that it provides a number of options including transcoding it does require interaction with a menu and dialog box. In the fast moving world of editing and checking media on-set, one-click to just move media off of a P2 card for instance might be worthwhile.

I was very happy with this initial round of “kicking the tires” on the new Avid Media Access support in Media Composer 3.5. While I admit this wasn’t in a real edit the testing I did provided great results. This new support should go a long way toward silencing a lot of the critics who have always complained about Avid having to copy and/or transcode media to a native Avid format on Avid media drives. The first question many ask is will AMA be able to support .mov files. As I’ve mentioned QuickTimes are dependent on their codec more than anything but it would stand to reason that if Avid can support a codec than it should be able to support a QuickTime .mov with that codec via AMA. A perfect example would be QuickTimes that use Avid’s own DNxHD codec. That is a totally logical step for Avid to make. One of our current workflows for editing RED media is to create DNxHD 36 QuickTime files of an entire RED shoot. After the baking of the files into DNxHD QTs then comes the painful (I say painful because I can’t figure out a consistent way to create the QTs and have Avid bring them in using “fast import”) process of importing them into Avid for editing. If they support DNxHD QuickTimes via AMA then it would be one click to bring them in for edit. I repeat, these are QuickTimes created with Avid’s own codec. They really need to add this support. They have to add this support. It just makes sense, even if they add DNxHD QuickTime support to AMA and nothing else.

As an editor does, I will complain a bit now: We like what we see with Avid Media Access. Now give us more.

One of the most misunderstood concepts in Media Composer is Transcoding vs Consolidating and really, Avid “friendly” media in...