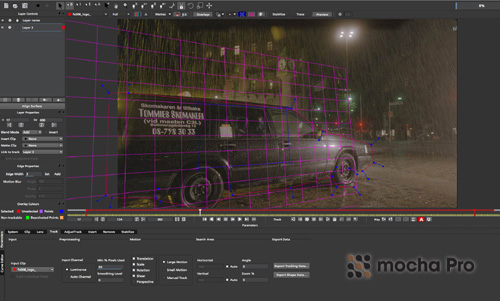 Imagineer Systems also announced today it has made significant enhancements and added capabilities to mocha for After Effects, the Company’s stand alone tracking and roto tool for the After Effects community. Now re-named mocha AE, this award-winning VFX tool now extends its support to both the After Effects and Final Cut Pro communities. With this development, mocha AE now help solve problematic shots that challenge the built in tools of After Effects and Final Cut by bringing advanced planar tracking and matte creation tools in a simple, easy to learn interface. While Adobe After Effects CS4 and CS5 continue to ship with free copies of mocha for After Effects, these customers are offered a streamlined upgrade path to the new mocha AE v2.5.

“The release of mocha Pro in many ways marks a new beginning for Imagineer Systems,” said John-Paul Smith, chief executive officer of Imagineer Systems. “We’ve often talked about streamlining and simplifying workflows for our customers; today, we’re announcing how we’ve streamlined and simplified our product offerings as well. Deciding on which Imagineer Systems tool set is best for you should be as simple as using the tools themselves. And we’ve made that a reality with a new web site, new training videos and a simplified product lineup that now includes mocha Pro, mocha and mocha AE. It’s that simple.”

mocha Pro has been in beta test leading up to its release, and Imagineer Systems reached out to the VFX community to help run it through its paces. Here are some of their reactions to mocha Pro:

“We are long time fans of Imagineer’s mokey, monet and motor and over the years our VFX artists have relied heavily on all of them. The integration with all of our systems has been seamless, while the trackers, removal and compositing tools are incredibly impressive. Now with mocha Pro, having all the tools combined in one application will enhance our capabilities in all areas for our clients, and greatly simplify the workflow for our artists.”
Jeff Fleck, Senior Editor, Postique

“I’ve been beta testing mocha Pro on some projects, and I have to say I’m loving it! To have the best of all worlds, tracking, object removal with stabilization and all within a new interface – it must be my birthday or something! I would love to buy mocha Pro – no more copying over two programs for the film business stuff!”
Vincent MacTiernan, Extreme Digital Productions

“mocha Pro is amazing! I’ve been working on a project that requires miniaturizing objects in a scene, but the footage had to be stabilized first. The original footage was so bad, it looked like it was shot on a ship in a storm in the North Sea. The scale rotation and position of objects kept moving and there was barely anything in the scene to track apart from a partially obscured table. I couldn’t believe it, but mocha Pro have a solid track with only 90% of the pixels available – mocha Pro followed the track nice and tightly – what an improvement!”
Phil Colfer, VFX Artist

By taking the best and most widely used features of mokey and monet, and combining them with the Company’s signature planar tracking technology, Imagineer Systems is delivering a world class VFX tool that greatly increases artist productivity, making it the ideal VFX complement for commercial and feature film post production, 2D-3D conversion projects, broadcast design and boutique agencies.

mocha Pro also delivers a number of new features, including:

mocha Pro is available immediately and is priced as follows:

* Any Imagineer Systems node-locked product: $895 US
* Cross-platform floating license: $1,095 US

Adobe CS4 and CS5 customers who wish to upgrade to mocha AE v2.5 can visit www.imagineersystems.com for more information. Additionally with this new development, mocha for Final Cut will no longer be sold as a stand-alone product as all of its functionality are now included in mocha AE.

mocha Shape plug ins for After Effects and Final Cut Pro are now included free of charge with all new mocha products, including mocha Pro, mocha and mocha AE.