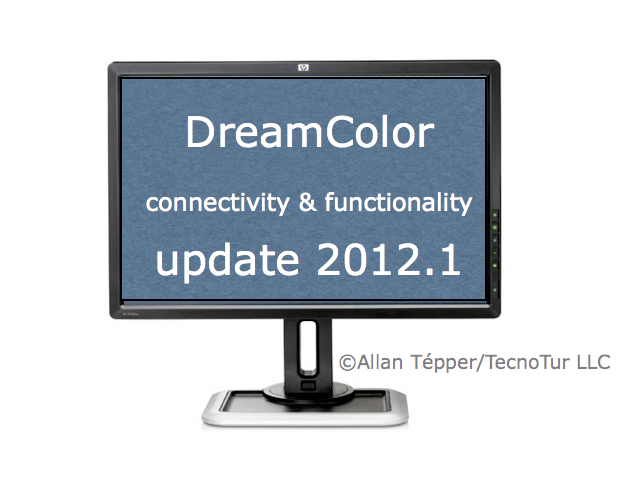 After a period of non-disclosure from HP, I finally have lots of information to report about news regarding DreamColor connectivity and functionality with Mac. In this article, you’ll find out about new DreamColor software for Mac (you no longer need temporary access to Microsoft Windows to calibrate the DreamColor in a pro video environment with a pro video i/o interface), problems and solutions resulting from Apple’s surprising switch to YUV instead of RGB on the Mini DisplayPort/Thunderbolt output on Macs released starting in 2011, and more. I have called this article DreamColor Mac connectivity and functionality: update 2012.1 because I expect there to be several more this year.

Ahead in this article

When you calibrate a DreamColor monitor connected to a professional i/o device from AJA, Blackmagic, Matrox, or MOTU, the settings and profiles are stored in the monitor (as they need to be), not in the computer. Up until now, it has been necessary for Mac-based editing/grading suites to have at least temporary access to Microsoft Windows in order to carry out such a calibration. This has meant bringing a Windows laptop or desktop temporarily into the edit/grading suite, or installing Windows under Boot Camp onto the Mac used in the editing or grading suite. (For me at least it only worked via Boot Camp. The only time I tried via a virtual machine, it didn’t work.)

Although the installer for the new Mac software has not yet hit the HP web site (they are in the midst of a redesign and it won’t go live until the redesign rolls down to the product pages), it is available from X-Rite (as all DreamColor Calibration software is) here.

Ideally, we should be able to send the DreamColor the exact framerate that is on the timeline/sequence/project, or a 2x representation of them for the slower ones, since the DreamColor does a 2x of them anyway. The exact doubling should not introduce any frame-rate conversion artifacts. So:

The DreamColor can accept all of those listed. The behavior of the Mac OS varies among versions and the hardware surrounding it, as well as the monitor connected to it. Hopefully, when you connect your Mac to your DreamColor, the Mac’s Display control panel (inside of the System Preferences) will offer you the correct matching framerate (or at a least 2x representation, as listed above). If that is not the case, you may need a third-party piece of software in order to add options to the control panel. One that I have successfully used is SwitchResX. However, you must use it at your own risk. I have used it at least twice on two different systems, and it has never caused me any problems, but I have heard of a case where someone had to reinstall his entire operating system. The last time I used it was in 2011 and it was compatible with 10.7.x. Its GUI isn’t the friendliest, but it did accomplish what the goal was: to add 50Hz to the Mac’s Display control panel.

You may know that starting with the new version of the MacBook Pro with Retina display (June 2012), there is finally a direct HDMI output. Several ProVideo Coalition readers have written to me to ask whether this output is kosher for DreamColor. Unfortunately, I don’t have the answer yet, nor do my contacts at HP. We have requested a loaner unit of one of the new MacBook Pros with Retina, but it may take several weeks until we have the answer. At that point, we’ll be able to answer the key questions:

Please stand by as we are able to get these answers to you. If any reader already has both devices, contact me here.

Will AJA’s upcoming T-TAP be the messiah for the DreamColor (for those who otherwise don’t need a full i/o… and are not planning to use DaVinci Resolve in its full capacity)?

As stated in several previous articles, if you plan to use DaVinci Resolve to grade footage, you at least need a Blackmagic i/o, and then (until they remove the “Band-Aid”), an additional converter called HDLink Pro 3D DisplayPort in order to see a full-screen rendering of DaVinci Resolve’s output on a DreamColor monitor. On the other hand, if you are content to see the graded video only in its preview window (as opposed to full screen in a dedicated monitor), you may be able to connect the DreamColor directly to the Mac, as long as you can get around the RGB and framerate issues mentioned above.

For popular pro apps, your solution is likely to come with AJA’s T-TAP. However, a recent followup set of emails with AJA’s PR department revealed that they are not yet ready to release a list of supported pro apps for T-TAP, and they are not yet ready to confirm whether T-TAP will offer a “desktop” mode, to be used for general tutorials or pro apps that are not directly supported, like (presumably) Adobe’s SpeedGrade or (in its preview window only) DaVinci Resolve.

I have just published an ebook in two languages.
The format is Kindle, but even if you don’’’t have a Kindle device, you can read Kindle books on many other devices using a free Kindle app. That includes iPad, iPhone, Android phones, Android tablets, Mac computers, Windows computers, some Blackberry phones and Windows 7 phones.