Further insights around episode #5 of the Radio Film School podcast

Episode #5 of the Radio Film School podcast is a journey to find and define the signature style that filmmakers have and are looking to establish. Host Ron Dawson explores how a style is created and cultivated while interviewing creators like Ryan Connolly and Brett Culp to figure out how to define what is so often indefinable.

I talked with Ron to gain some further insight into this topic, and asked him how a filmmakers’ literal style can translate to the screen, the difference between inspiration and outright theft plus plenty more. 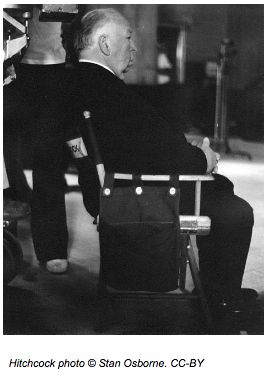 The story about your fashion sense as a child is pretty funny, but it got me thinking about how those sort of sensibilities translate creatively. Have people described your filmmaking as “flashy”? Do you think you could get a sense of a how a director dresses just by watching one of their films?

Ha. My filmmaking has never been described as “flashy”. Nor would it ever. Though, it’s interesting to think of a filmmaker’s style being revealed (even in part) by how he or she dresses. I don’t know if there’s a connection between a filmmaker’s style and his or her fashion sense; but I do wonder if how they dress betrays some insight into how they work on set. I think of the straight-laced threads of British directors Chris Nolan and Alfred Hitchcock vs. a looser, every-man style of dress by someone like the Coen Bros. or Tarantino. Or the almost “college kid” vibe the someone like Kevin Smith gives off. It would be an interesting exercise to see how their sets are run vis-a-vis their personal dress code.

Is it fair to filmmakers when certain styles take on a life of their own? When we say something is “Tarantinoesque” are we putting too much focus on the dialogue of that film?

I think it’s a testament to their craft if any artist’s style can help one identify their work. I can see it being problematic if for any reason they want to break out of a certain typecast (for lack of a better word). With respect to Tarantino, ironically, despite how signature his dialog is, I think if another filmmaker were to try and emulate Tarantino, I would envision they would do so visually and/or via the soundtrack. I think emulating someone’s dialog style is way too hard for most filmmakers to mimic. Frankly because I think most filmmakers are visual artists first. I have no stats to really back that up, just a feeling and a sense I get. Funny enough, one of my plans on the show is to shoot a short film idea I have in a very Tarantino-esque way, then use the making of the film as fodder for the podcast. In a perfect world it’ll tie in with the Tarantino episode. We’ll see. Anyway, the dialog in that film (the script of which I actually wrote a few years ago), is definitely inspired by Tarantino.

Opening scene from Tarantino’s “Inglorious Basterds” is Tarantino’s favorite scene of dialog that he’s written (per his words in a ComiCon panel interview).

The conscious decisions filmmakers make are obviously a critical aspect of what we would call their style, but at what point do such things add up and create something more? Is style more about those conscious decisions, or about how they all come together to form something that is greater than the sum of its parts?

I think it’s both. Naturally conscious decisions will feed into one’s style. But inevitably so will a number of other decisions the filmmaker makes subconsciously, strictly based on their likes and dislikes. But it all does tend to create a piece of art that represents a whole greater than the sum of its parts. Mainly because the combination of all those artistic decisions creates something new, while at the same time keeping in tact the the elements that created it.

The juxtaposition of “Stuck in the Middle with You” during the ear-cutting scene in “Reservoir Dogs” is a great example. I cannot ever hear that song and NOT think of that movie. The song is like a character. The shooting style where QT just pans away while the cutting is happening and we hear the screams, is a stylistic choice too. The music and the shooting are each their own “thing” that stand out on their own. But the odd combination of a fun and catchy song with such a gruesome act creates a whole other “thing” that is tangible. Call it “style.” But that “thing” is what makes that scene something that is greater that the sum of its parts. Two things (composition and music), creates a third thing–style. 1+1=3, ergo, the whole is greater than sum of its parts. (ta-daaa!)

The line between inspiration and outright theft is obviously a fine one, but what happens when you do cross that line? Is there any advice you can offer to anyone who wants to make sure they stay on the right side of that line?

This may be a somewhat controversial answer I’m about to give, but I don’t think you can “steal” a style. I understand what people mean when they say it, but in truth it can’t really be done. Whenever Pixar comes out with a successful movie, you see all these obvious knock-off straight to DVD animated pics in Target and Walmart. Down to even the DVD cover art. Are they “stealing” from Pixar? Some might say that, but “stealing” is to actually remove something from the possession of someone else. It may be annoying or frustrating when someone shamefully copies another person’s style, but it’s not “stealing,” per se.

To me, examples of stealing would be sampling a musician’s music and not paying them. Or getting ahold of someone else’s script or idea, then making it first and hurting the financial potential of the person who was robbed. Or, as is the case with what happened to Stillmotion a few years ago, another company overseas literally downloaded one of Stillmotion’s videos, added their logo as a bug in the lower right-hand corner, then uploaded it to their own site. That’s one of the clearest cases of stealing.

With all of that said, assuming you’re talking about crossing the line of egregious copycatting, the best advice I can give is, unless you’re doing a shot by shot copycat, don’t worry about it. You can try to emulate Tarantino, Kubrick, or Scorsese all you want, but you will never get it spot on. Not necessarily because you’re not as good as they are (which may be the main reason), but more so because you are not them. Inherently, you will do something different. Either because naturally it’ll come to you differently, or you just won’t have the resources to do it the way they did it. In the process of trying to emulate the filmmakers you admire, pay attention to your thoughts and feelings, and don’t be afraid to listen to your instinct. As you emulate, your “style” will peek through. As Brett Culp mentioned in the episode, keep on making stuff, and your unique voice will develop, even if it’s based on “stealing” someone else’s style.

When it comes to finding your style, perspective is key. And yes, as you go through life and have different experiences, your perspective will shift and change, and your “style” may accordingly. As you move from being single in your 20s to being a parent in your 30s, not only may your style change because of the new perspective, but the very stories you want to tell will also change.

We always want to know about the camera hardware used on a particular project, or what NLE was used for editing, partly because finding out why they got that shot or cut something the way they did is so often much tougher for a creative to explain. Do you think that’s accurate, or are we letting creatives off too easily?

I think most creatives who are experienced and adept at what they do, do know the answer to why and how they got a shot or a particular edit. I think the question that is harder for them to define is the one the Ryan Connolly alluded to in the episode: defining what their style is. Ryan knew the kind of themes he liked to explore and he definitely knows the why’s and how’s of his shots; it’s putting a definition or name to all of it that he found elusive.

The concept of filmmaking being all journey and no destination is very poignant, because it’s always going to be about the next project, even if you’ve already created what you and/or others consider to be a masterpiece. But it’s like that with any creative endeavor, isn’t it?
Absolutely. It’s ingrained in us as artists; and I have proof.

A few years ago I made a short film of my then 6 year old son building a house out of Legos. He LOVES Legos. Always has. I shot the film as a lesson on the mind of a creative, and it was exactly about this topic—the need of an artist to keep creating. After spending over an hour building this beautiful Lego mansion, what did he do? He kicked it over to build something else. It’s funny because there are times when he creates these elaborate spaceships or castles, and my wife and I have to tell him NOT to break it apart until we get a chance to take a photo of it. 🙂

Episode #6 of the Radio Film School podcast saw the official beginning of their “Women in Film” series with...