Apparently the software has been discontinued … for some reason or another. 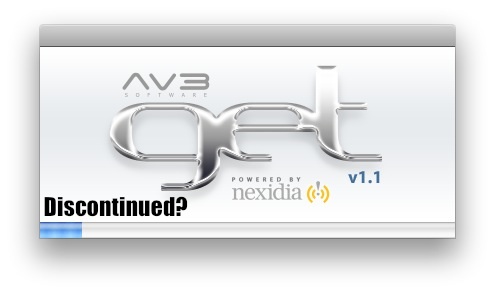 Remember the super cool phonetic searching tool for Final Cut Pro Get? This was an amazing software tool made to complement FCP that could phonetically search your media and return search results to FCP. It was powered by technology from Nexidia that made it all possible. Hopefully you have a copy if you need it because it seems that Get for Final Cut Pro is no more.

I got word this morning from a colleague who tried to buy a copy of Get today only to find out that it was unavailable to purchase. The link to the http://www.getphonetic.com/ website redirects back to the AV3 software store and a search there brings no results for Get. If you go to Nexidia’s Get page at http://www.nexidia.com/solutions/rich_media/av3_get there’s only a blank page. My colleague actually called Nexidia and was told there was some type of contractual issue between Nexidia and AV3 Software … and with that Get is gone.

I reached out to try and get some official word on the situation and was able to confirm that indeed Get as we know it is no more.

Word from Nexidia was this:

Get for Final Cut Pro is no longer available for purchase in its current form. Nexidia is working to provide updated dialogue search tools with broad compatibility and support for new professional workflows, which will be available in the near future.

Word from AV3 Software was this:

That’s some sad news as Get for Final Cut Pro was an amazingly useful piece of software. I thought it might have something more to do with the transition to Final Cut Pro X (and maybe it does ultimately) but from the information I received it does feel like it could have been some type of business dispute. That’s a real shame as Get for Final Cut Pro was one of the more useful tools I had ever come across. There was a rumor at one point that Get might turn into a stand alone product as well. That was just a rumor so who knows if something like that is still in the works or if they are trying to move Get to Final Cut Pro X. Oddly enough Nexidia still has their press release about Get winning a Black Diamond award at NAB 2010 as well as links to media awards.

I don’t know of any other standalone phonetic searching tools so if someone knows of one please comment below. Nexidia is still powering Avid Media Composer’s PhraseFind as well as Avid’s ScriptSync. If you remember ScriptSync used to be included in Media Composer’s cost but it was recently broken out into a separate paid module. That’s $995 for ScriptSync and $495 for PhraseFind. Some Avid users weren’t too happy when this happened but looking at the ScriptSync FAQ then Get’s disappearance might make more sense.

From the Avid ScriptSync FAQ:

Why did Avid break out ScriptSync from its editing applications and make it an option?

If you’re not aware, Avid partners with a third-party company and licenses the underlying technology. Recently, our contract was renewed and due to increased licensing costs, we decided to offer ScriptSync as an option rather than pass the cost on to all of our customers. And it allows those who do take advantage of this technology to continue using it for an exceptional price.

If you remember, earlier in the year Get both lowered its price and began offering a rental model. That makes me wonder now if AV3 was trying to generate more revenue to cover costs of licensing the Nexidia technology.

I just hope something can be worked out as Nexidia’s phonetic search technology is too cool for editors across all platforms to not have access to. Ironically when I got the phone call asking if I knew what happened to Get I was using PhraseFind in Media Composer to search out soundbites from a DSLR interview. Since there was no timecode logged from the shoot the phonetic searching made it a snap to search out the phrase, which it found with near 100% accuracy in the double system sound wave file and then reverse match frame back to the sequence to get the video. It would have taken all day without it.

Here’s hoping that Get returns in some form.