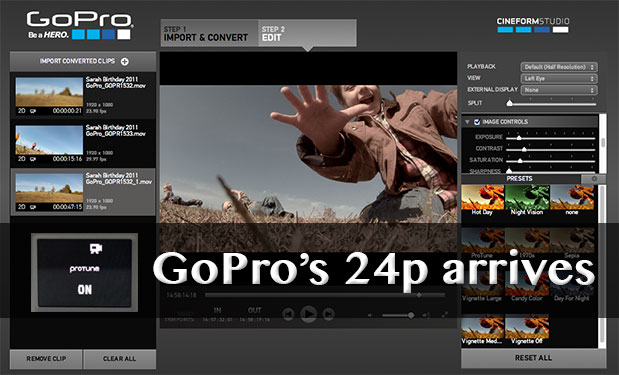 Everyone’s favorite little action camera finally got the long awaited 24p update last week. GoPro shipped Protune which means your GoPro Hero2 is only a firmware update away from a higher bit rate and 24 frames per second. The Protune news is buried down in the press release about news of the GoPro app. I’m not sure why the Protune update didn’t get its own press release as it’s an important update for many GoPro owners and will probably get more use overall as the iOS and Android app is really most useful as a companion to the Wi-Fi BacPac. The Protune update is easy to install and requires the GoPro Cineform Studio. I hadn’t installed that before but it’s actually a handy little application.

After installing the GoPro Cineform Studio you should get an alert to update when your Hero2 is connected and the software is launched. You can always check the current camera version under Help > Device Window: 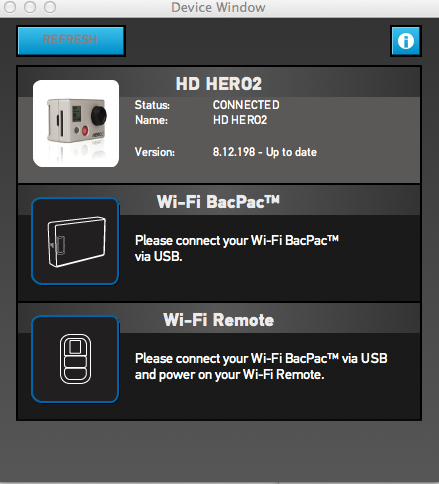 Full instructions on how to update the Hero2 are available in both text and video form.

Once installed you must enable Protune from the More section of the GoPro settings. 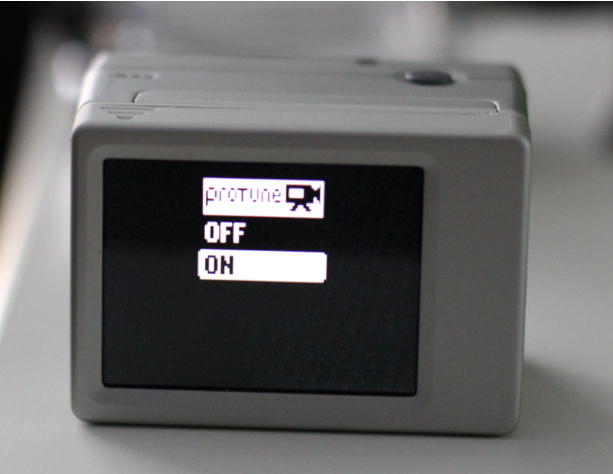 There’s a new option in the GoPro camera settings to enable Protune. 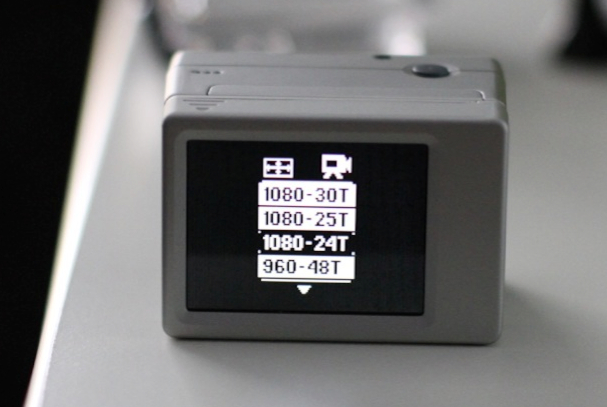 With Protune a Hero2 now has an option for 24.

UPDATE: According to David Newman of Cineform fame, the 24p really should be 23.98 and it behaved that way in the betas. Likely a bug he says that will hopefully be addressed soon.

Unlike the GoPro’s other frame rates, 24 appears to be true 24 and not the more broadcast friendly 23.98.

I’m not exactly sure why they didn’t go 23.98. It’s not that big of a deal since it will still work but it’s one more thing to be aware of in post-production as it may require an extra step to conform footage to 23.98 and/or some sync drift might occur depending on what you’re doing with your GoPro.

The other nice thing that Protune brings is a higher bit rate and a more post-production friendly picture style. As in a flatter image that should provide a bit more latitude if you have to color correct. If you head to YouTube and search for something like GoPro Protune test you’ll find a ton of them. Vimeo too.

While updating my Hero2 I finally tried out the GoPro Cineform Studio. GoPro acquired Cineform last year and there’s a number of premium GoPro Cineform products but the GoPro Cineform Studio is a free download and makes for a nice little conversion tool provided you’re okay with Cineform .movs in your post-production pipeline. I think one reason I never took a look at the product is because I always just do a quick conversion to ProRes or DNxHD for editorial of GoPro clips. Cineform is a great codec and I have tested it in the past with both Adobe Premiere and Avid Media Composer. The clips I ran through it while playing with the newly Protuned footage worked fine in both of those NLEs as well as FCPX but I haven’t used it in a real edit.

The GoPro Cineform Studio provides for some nice options. There’s two steps to using the software. Step 1 is the import & convert stage where you load clips and can do things like trimming IN and OUT points as well as flip the image if you’ve shot with the GoPro mounted upside down. 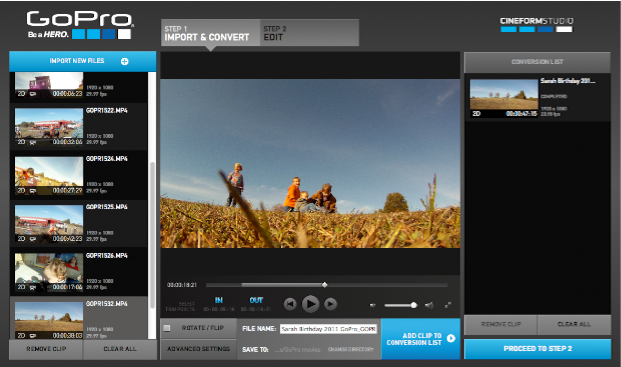 There’s also a number of Advanced Settings for doing things like changing the image size and frame rate as well as changing the speed: 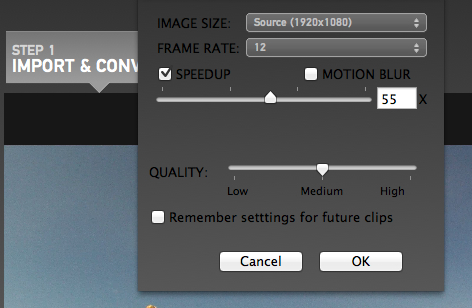 Step 2 is Edit. Here is where color, image controls and framing controls are applied as well as any look presets that you might want. If you’re doing stereoscopic work with the GoPro 3D Hero System then all that work will be done here as well. 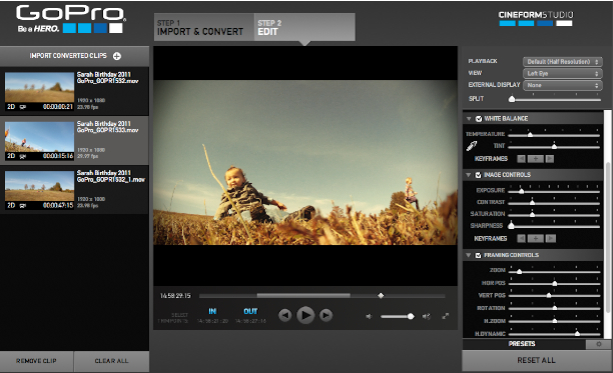 A lot of work can be done in the Edit tab to really dial in your GoPro footage. All changes are saved to the clips as metadata without having to re-encode the file. 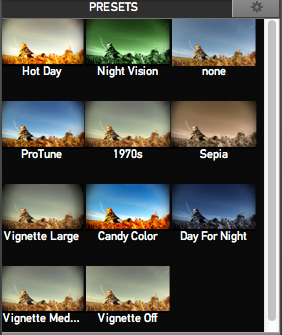 There’s even a few look presets that come in the GoPro Cineform Studio.

It’s also worth noting that when you make these look, image and framing changes to the Edit tab in GoPro Cineform Studio it doesn’t have to re-render or re-encode the clips as the changes are just metadata in the .mov file. If you make changes to the image in the Cineform Studio then those changes will instantly be reflected in the applications that might be using the files. At least those changes showed up instantly in both Premiere Pro CS6 and Avid Media Composer. This is what Cineform calls Active Metadata and it’s a clever technology.