The more that I’ve gotten into aerial videography & photography with the GoPro Hero3/3+ Black, the more I’ve had issue with the GoPro’s OEM “fisheye” wide angle HFOV (Horizontal Field Of View), which distorts the horizon and creates a curved “bubble” effect. The biggest issue with that is when the quadcopter is in motion or the camera is tilted up, the bowing effect of the horizon or long straight lines such as fences, buildings and light poles look like rubber. There are a couple different third-party producers of replacement lenses for the GoPro and after some research, I decided to contact Peau Productions to test a couple of their lenses. Here are my results of this test… 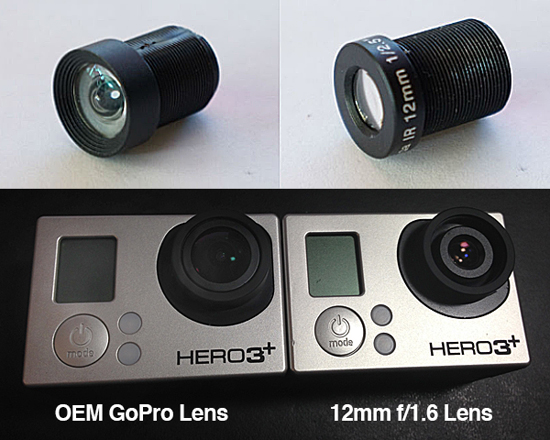 As anyone who has shot with a GoPro can attest, sometimes the OEM ultra-wide angle lens “fisheye” lens accomplishes what you need to capture the surrounding area in a shot and the warped/distorted image is actually a desired effect. But often times it’s not and editors must tweak the image using lens profiles in Photoshop or After Effects to try to correct it and give you a useable image/shot.

The Peau Production GoPro Hero3/3+ Black replacement lenses offer a variety of optical configurations; two of which I tested, the 12mm f/1.6 ($85) and the 2.97mm f/4.0 ($100) (shown above in the top photo). Both of these lenses screw in place of the GoPro OEM lens, but care must be taken in modifying your GoPro Hero3/3+ (I’ve provided the “how-to” DIY videos down below). I chose these two lenses as I wanted to see the extremes in their lineup, from a distortion-correcting 2.97mm to a micro tele 12mm lens with a very shallow DOF. I primarily use my GoPros in aerial photography/videography so I wasn’t sure how useful the 12mm lens would end up being, but more on that in a bit. 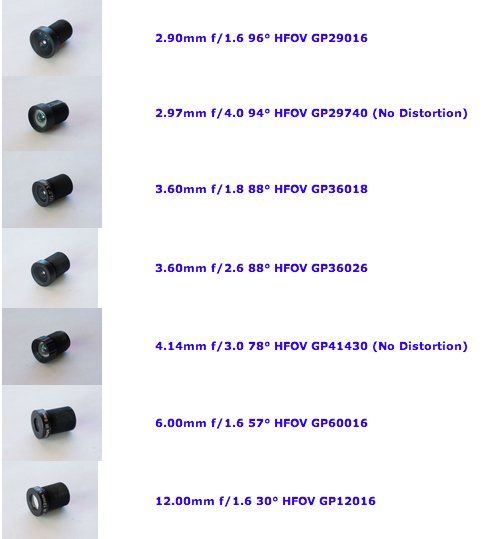 So I tried some side-by-side tests with 3 GoPros: one each lens replacement and an OEM Hero3+. In the image below, you can see the bar they were mounted on a tripod with and all set to the same settings and triggered at the same time. The resulting images are unretouched/cropped. You can definitely see a pleasing difference between the stock OEM lens and the 2.97mm lens on the left, and the very narrow/shallow FOV of the 12mm on the bottom right. 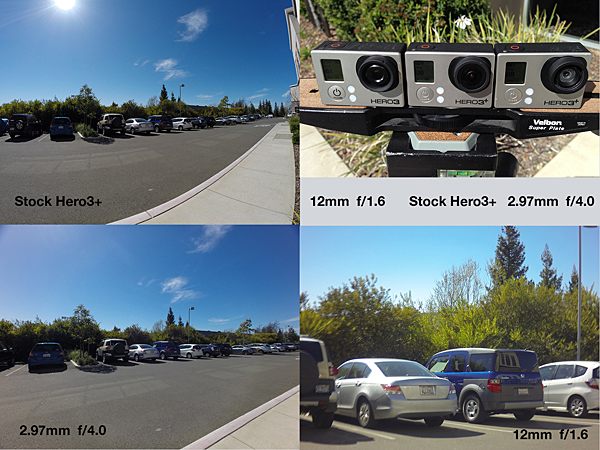 I did do some video tests with both lenses in various locations but quite honestly, the 12mm is just not right for aerial video – at least not without a 3-axis gimbal and knowing exactly what your distance for the subject you’re aiming at may be. The results were often fuzzy and muted tones, like an old Super 8 film camera, which is actually a cool effect I’m anxious to try out some time, but not anything I can really compare completely in this review.

I have however, shot quite a few video clips and photos with the 2.97mm lens in a GoPro Hero3+ Black and am very pleased with the images. The lack of distortion makes the photos and video clips useable for architecture and closer-range objects right out of the camera without the need for a lot of correction. Here’s an example I shot above a construction site in San Francisco just this week: 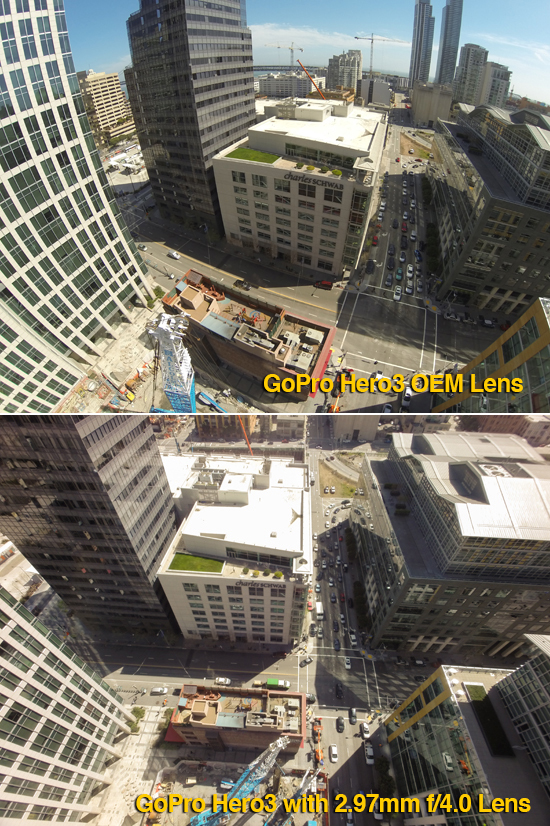 Since the Peau Productions lenses aren’t coated, you may need to add an ND filter or Circular Polarizer to cut down on some of the glare they pick up. This is something I’m currently testing with and will post an update as soon as I have some results.

*UPDATED on 3-27-14: Since this article was first published, Peau Productions is currently working on some filters and possible shades to assist the multi-element lenses in reducing lens flare. I will be posting updates and test results here in the near future.

I’ve created an example series of aerial video shots around the north bay area where I live using a DSLRPros Ultimate Cine Phantom Quadcopter with a modified GoPro Hero3+ and the Peau Productions 2.9mm f/4.0 lens. I shot at 2.7k 30fps and only did a color grading pass on these examples, so no other cropping, warp stabilization or speed adjustments were applied to the raw footage. Only the final render was resized for 1080p for YouTube for this exclusive PVC video. I love how “normal” the images look and without any ND filters or Circular Polarizer, the sun does flare quite a bit through the multiple filament lens, but I kind of like that effect as it “feels” more like a bigger lens.

So How Hard Are The DIY Lens Replacements To Do?

After doing the lens replacement on both the Hero3 and the Hero3+, it’s obvious that GoPro intended the Hero3+ to be modified or future-proofed, as it’s much, much simpler (and safer) to do this modification than with the Hero3. As per the instructions, it’s important to set your focus of the replacement lens. Also note that this modification is best set with a dedicated camera if possible. Exchanging lenses (especially in the field) is going to introduce dirt on your sensor, so it’s really best to do it in a clean environment.

*IMPORTANT NOTE: it’s really critical that you hook your Hero3+ & Hero3 cameras up to a larger field monitor with an HDMI cable to set the focus. I first tried with only the LCD BacPac and ended up being way off after my first test recording came back. 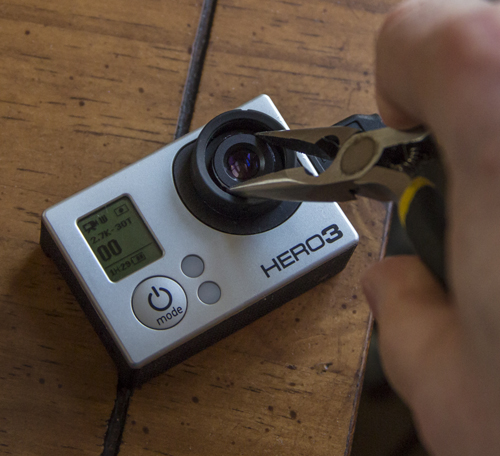 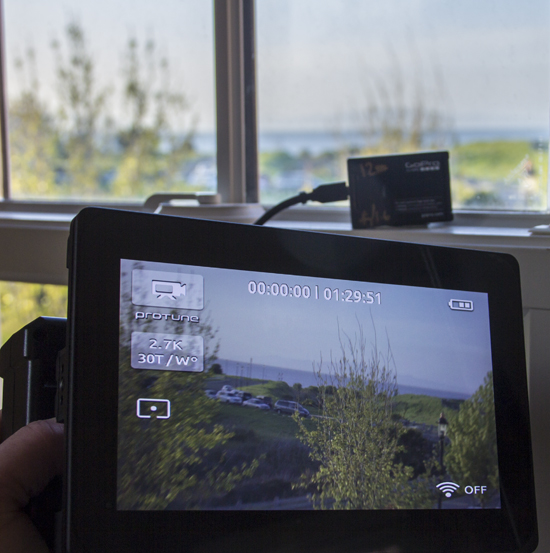 Replacing the Lens in Your GoPro Hero3+

I was actually quite surprised at how easy this was to do and you don’t have to totally destroy your camera to do it. I followed the step-by-step instructions in this video closely and found that the camera functions just fine and fits inside the waterproof housing with no clearance or fitment issues. The lenses actually sit slightly back in farther than the OEM lens. Also, regardless what is mentioned in this video, the Hero4/3+ and its predecessor, the Hero3 lens assemblies are ENTIRELY DIFFERENT! This means if you’re modifying your Hero3, then skip to the next section below…

Replacing the Lens in Your GoPro Hero3

I was really nervous about attempting this procedure and thought for sure I was going to demolish a perfectly good Hero3, but I watched this video several times and followed it step-by-step, pausing and replaying to make sure I was doing it correctly. The OEM lens was glued in more than Grandma’s dentures with a big wad of rubbery white adhesive so it too a lot of force to get it out but then I was able to clean out all the glue and put the camera together again the the new lens screwed right in just fine.

Also note that this video is by a competing producer (RageCams) and I didn’t use a steak knife, but rather flat edge screwdrivers. You’ll also need a T4 Torx wrench.

I’m most impressed with the performance of the Peau Productions 2.97mm f/4.0 lens overall and it will most-likely become my preferred “go-to” lens for my aerial shooting for now. I do hope to test a few other lenses from their lineup soon and even some of their other products like the 8.0-50.00mm f/1.6 zoom lens in a different application than aerial shooting. I’ve been impressed with the build quality and the performance so far – a great upgrade for the GoPro Hero3+ Black, no doubt.