a roundup of resources

You can view Adobe’s panel discussion with the editorial and post-production team behind the movie Gone Girl from director David Fincher. As you may have heard, the Fincher team leveraged Adobe Premiere Pro and After Effects in a workflow based on RED Dragon 6K raw footage files framed in 5K.

My elderly neighbor, my dentist and my cleaning lady all told me about the Gone Girl post production workflow in Premiere. Everyone knows.
— Worst Editor Ever (@worsteditorever) October 6, 2014

The Gone Girl team event is embedded below and was streamed online from 11am to 12pm PST on Thursday 23rd October 2014 (2pm in New York, 7pm in London, 8pm in Stockholm). The Gone Girl team panelists included:

During the presentation the Adobe Premiere Pro team was on Twitter. Viewers could use Twitter hashtag #GoneGirl from 11am PDT onwards to join the conversation with Premiere Pro product manager Al Mooney and his colleagues.

Later… Adobe has posted the panel as Behind the Scenes on Gone Girl, which seems to have been held earlier in LA (it starts with a quick overview of how the tools were used):

It seems everyone has jumped on the Gone Girl bandwagon, but useful information and quotes are jumbled about the hype, and especially so if you scan articles too quickly. It’s easy to be missing parts of a mental map of the workflow.

Adobe shared the basics, including how the collaboration improved features (and later explained more by Al Mooney):

“…the latest Creative Cloud updates include a number of features developed in collaboration with Team Fincher. These include larger features, like Multi-project workflows and Advanced Timeline search, workflow enhancements like EDL improvements and Render & Replace, and important details of the UI and workspace refinements, such as ripple label colors and definable marker colors, the way in- and out ranges are displayed.

Fully 80 percent of Gone Girl ended up as some form of After Effects CC composition on the final Premiere Pro Timeline for the project. This gave rise to the request for the Render & Replace feature from Team Fincher. Render & Replace ensures fast playback of projects with lots of visual effects by substituting comps with rendered clips—without losing Dynamic Link integration between Premiere Pro and After Effects.” 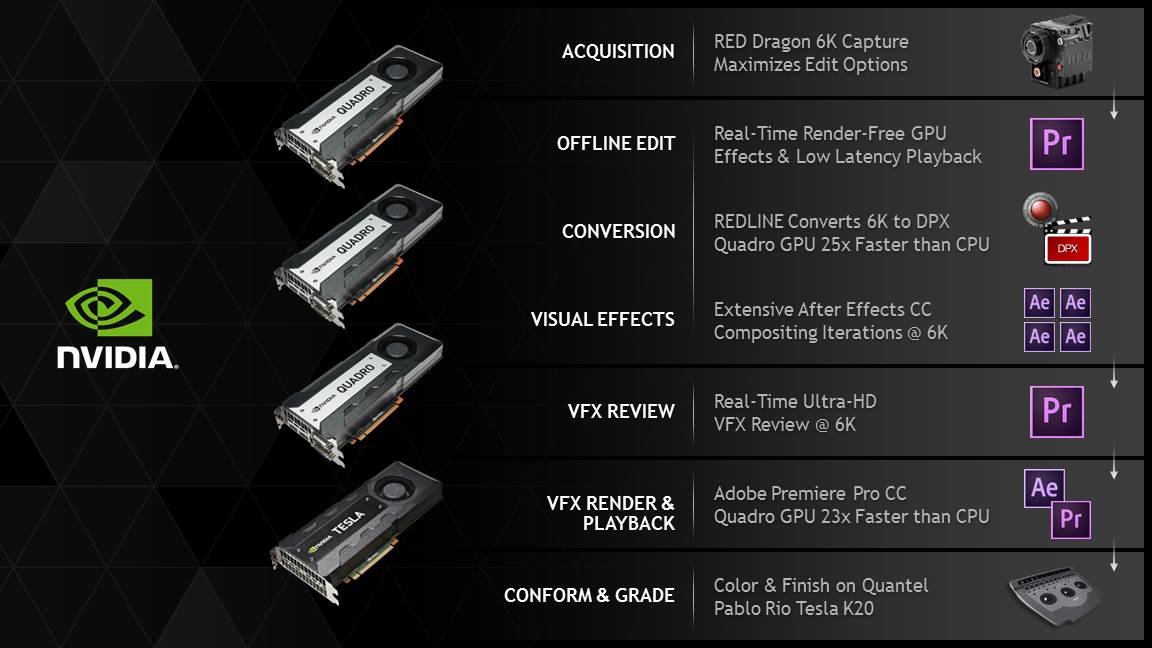 There were “probably more than 200 shots” done with After Effects: compositing screens, performance retiming, split screens, and so on. Oliver Peters collected some interesting quotes in his rundown:

[Editor Kirk Baxter] “First of all, I tend to do a lot of invisible split-screens. In a two-shot, I’ll often use a different performance for each actor. Roughly one-third of the timeline contains such shots. About two-thirds of the timeline has been stabilized or reframed. Normally this type of in-house effects work is handled by the assistants, who are using After Effects. Those shots are replaced in my sequence with an After Effects composition. As they make changes, my timeline is updated.”

“There are other types of visual effects as well,” Baxter continues. “David will take exteriors and do sky replacements, add flares, signage, trees, snow, breath, etc. The shot of Amy sinking in the water, which has been used in the trailers, is an effects composite. That’s better than trying to do multiple takes with the real actress by drowning her in cold water. Her hair and the water elements were created by Digital Domain. This is also a story about the media frenzy that grows around the mystery, which meant a lot of TV and computer screen comps. That content is as critical in the timing of a scene as the actors who are interacting with it.”

Tyler Nelson added his take on this, “A total of four assistants worked with Kirk on these in-house effects. We were using the same ProRes editing files to create the composites. In order to keep the system performance high, we would render these composites for Kirk’s timeline, instead of using unrendered After Effects composites. Once a shot was finalized, then we would go back to the 6K .r3d files and create the final composite at full resolution. The beauty of doing this all internally is that you have a team of people who really care about the quality of the project as much as everyone else. Plus the entire process becomes that much more interactive. We pushed each other to make everything as good as it could possibly be.”

According to AJA, “AJA’s Io 4K was used as a reference grade device as it allowed us to playback DPX frames without any tearing or artifacts when reviewing VFX shots.” Imagineer Systems has info on the tracking in “Team Fincher” Turns to mocha for “Gone Girl”.

In Nvidia’s case study, Jeff Brue said that the real time downscaling of 6K to 4K and 2K-ish previews, and GPU debayering, was “crucial to ensuring the best post production experience.” Nvidia summarized the technical details nicely, as pictured below. There’s a nice long discussion at Moviola, “Editors on Editing with Kirk Baxter.” A SIGGRAPH 2014 video with Jeff Brue on the workflow is embedded below.

The A.C.E. Eddies series “Editors on Editing” with Kirk Baxter is up.

You might pick up other details in two very good roundups, by Jason Bowdach and Jonny Elwyn, and in other articles, if you haven’t followed up on the usual Twitter feeds or attended panel discussions in Los Angeles.

By the way, “Team Fincher” has built on other experience in post-production like House of Cards and The Girl with the Dragon Tattoo. For another slice, see ‘The Social Network‘ conformed with After Effects + on AE Portal archive; here’s a sample.