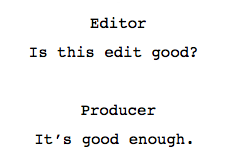 Continuing with the links to other good articles that are great reads for our particular industry comes a link to a Wired article called The Good Enough Revolution: When Cheap and Simple Is Just Fine. That kinds of sums up a lot of what is going on in film and video production today wouldn’t you say? That Flip camera footage that comprises a large part of your program would have been flat out rejected on broadcast television at one point in the past but today … it is good enough.

When I read this article I had a great sense of deja vu (and a why didn’t I write that first feeling ) as I’ve been using that very term, good enough, for a while now to describe what is acceptable in media production these days. While the article talks mainly about technology and media from a consumer consumption point of view, the “good enough” factor is greatly challenging professional media creation as well. It seems that as time has ticked by, as cameras and post-production software grows cheaper, that the overall quality has been reduced. What was once unacceptable in a finished production is quite common when an edit is mastered today.

I feel like I’m in an interesting position in my career as I’ve been around long enough that I learned true celluloid film production and posted work that had the negative cut. But yet I’ve never earned a cent or had a job editing on anything except a computer and non-linear editing software. I learned how to edit on an Avid before Final Cut Pro was ever in the market but I used Final Cut Pro as a path to many years of freelance editing. I remember a time when a certain major music video network would not accept a video for air that didn’t originate on film. Expanding on that thought, once a video originated piece came to a facility where I was working to be played back on a broadcast monitor as the monitor was filmed on 16mm film to meet that requirement. That’s how strict the network was with film origination. Now that same channel regularly airs videos originating on DVCPRO HD and HDV. Not that this is necessarily a bad thing as there are great non-film acquisition formats (hello RED). Networks just seem to have lesser standards in what they accept in terms of quality these days. As the article states, things are often just “good enough” that they are acceptable by many of today’s standards. It’s not uncommon to see compression and motion artifacts, bad color correction and questionable lip sync that is “good enough” today but wouldn’t have been acceptable 5 or 10 years ago.

I recently worked on a concert by one of the biggest country artists in the world. It was shot on HDV, very sloppily edited, the cameras didn’t match (even though they had tried to color correct with the Final Cut Pro color corrector), sync was often off, dissolves used instead of band b-roll or audience cutaways … and nowhere in the edit process was it ever viewed on anything other than the editor’s computer monitor. And this was going to broadcast TV. I spent a day fixing a lot of the problems that HAD to be fixed or it couldn’t be mastered but when we offered to go deeper and try to make the production a lot better they declined. It was “good enough.”

Is this type of thing acceptable today because of You Tube? Low budget television programs on low budget cable networks? Cheap HD cameras? Final Cut Pro? It can’t necessarily be diminishing budgets as you can do great work with an HDV camera and Final Cut Pro … You just have to know how to do that great work with those tools. I think that’s what is often lacking in this “good enough” world that we are living in. Since everyone and their mother can own an HDV camera and Final Cut Pro they think can produce that top quality work. Often they can’t but it’s either “good enough” for their clients (especially considering the budget they are paying) or they have a professional fix the problems.

But what exactly is quality today? Why are certain things acceptable in a finished production today that wouldn’t have been accepted a few years ago? Why are clients and viewers alike willing to accept something that is just “good enough”? I’d say it’s an issue well worth discussing in 2009 but it’s been worth discussing for the last couple of years.