This is not your Father’s robot film 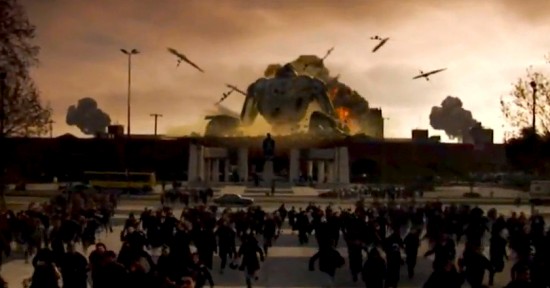 Move over, Robert Rodriguez. It’s the stuff of independent filmmaker legend…a virtually unknown director posts a short film clip on Youtube, shot in his own spare time on a shoestring budget…and is discovered by a major studio, who offers said filmmaker a massive movie deal. In this case, the filmmaker is Federico Alvarez, and the movie deal is reportedly worth $20 million. Read on…

“The 30-year-old was whisked to LA where he was offered a $1 million directors fee and up to £30 million to make the film, by Mandate Pictures. The plans for the movie are said to have a “compelling original story” beyond big robots blowing stuff up. Alvarez has also been put up in a new apartment, given a new car and will work with “Spider-Man” director Sam Raimi on developing the film.”

Compelling original story. Huh, what a concept! And I’ve travelled a lot, but have never been whisked anywhere. It certainly sounds like a fun way to travel. Anyway, I’m just glad that student filmmakers will finally have another “OMG look what you can make on X amount of dollars!” example to prop up when justifying their own filmmaking efforts, as the ‘ole Rodriguez/El Mariachi/Desperado example is wearing thin. Most importantly, I’m looking forward to seeing what Alvarez produces with a real budget. Congratulations sir!

You can watch the short film “Panic Attack” below.