What went through your head the first time you were on a film set?

On episode #4 of Radio Film School, host Ron Dawson takes his audience down memory lane to recount some of his “first time” experiences in order to convey what they can mean for filmmakers in their careers and on particular projects. It’s easy enough to recount the memories and emotions around a first kiss or first car, but do you remember what you felt the first time you were on set? Or the first time you picked up a camera? Can you trace either of those things back as the source for a love of filmmaking? Or as the source of a completely different feeling about being behind the camera?

You can listen to the full episode below or download it via iTunes, and Ron laid out further detail around some of the topics dealt with in the episode. We ask him some specific questions about what other “first times” he wanted to explore, what the ubiquity of video capabilities will mean for young filmmakers, why being on a set for the first time was so special for him and plenty more. Reading what he has to say will serve as a tease of what’s in store for the episode while also providing some significant supplementary info.

As you were pondering what “first times” to explore in this episode, which ones ended up being crossed off the list because they weren’t a fit?

The answer to that question funny enough is actually in the episode. It comes off as a throw-away joke, but it is indeed the best answer. The story of my first kiss. It involved me emotionally hurting a dear friend at the time. The reasons can be chalked up to sheer naivete and male stupidity. Nonetheless, telling that story really would’ve been a buzz kill.

The specific filmmaking firsts I didn’t explore I at least make reference to. One was the first time a video I made was played for a large audience. It was for my church and I sat up in the highest bleachers to see all the action. The overall response was great.

Another key filmmaking first for me was the first time I played a wedding highlight video for my very first wedding clients. It was a 7-minute video and during those 7 minutes they laughed and cried. It was a powerfully moving experience to see my art affect people so personally. I had seen my work move people emotionally before, but always on a large scale. This was the first time seeing it at such a small and intimate level. Up to that point in my nascent career, I had planned to just shoot weddings until I could make “real” videos. That experience gave me a whole new perspective and I happily spent the next five years focusing primarily on weddings, fulfilled that my craft could be use to help strengthen the foundation of new families.

Anyway, it wasn’t so much that these first-times weren’t good fits, it’s just a matter of prioritizing which stories to tell on the show for time purposes.

Do you think filmmakers have to have a “love” of cinema in order to be successful? You can tell me if I’m wrong, but I imagine there are some storytellers and craftsmen who might not have a “love” of filmmaking, but knowing how to tell a story and/or what they’re doing behind the camera is enough.

I think you’re absolutely right. Having a “love” for cinema is not necessarily a prerequisite for success. Naturally, that all depends on how you’re defining success. When it comes to filmmaking, I see one of two forms of success. Critical and commercial (i.e. financial). The holy grail is attaining both. But there are lots and lots of filmmakers who you could say are critically successful, but rarely have two nickels to rub together. Likewise, you have those who have achieved great commercial success but no one is really looking towards their work for any kind of artistic inspiration. You see that from Hollywood to corporate and wedding filmmakers. I’ve known and know people for whom video production is just a business. They love business and their business just happens to be video. And there’s nothing wrong with that.

Likewise, you have filmmakers who used to love filmmaking and cinema, but after many years, maybe even decades, they’ve fallen out of love, but still do it to pay the bills. 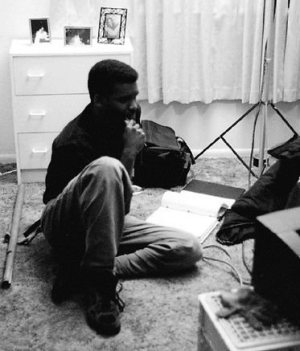 What was it about being on a set for the first time that made that experience so special? Was it a sense of, “this is how they do it”? Or something else?

I think there was definitely the “this is how they do it” aspect. I think everyone, to an extent, is intrigued with “movie magic.” I remember back when I used to shoot wedding videos, one of the services we offered was love story videos (short documentary or narrative recreations of how the couple met and fell in love). When working with the clients, I would often use a slate just to give them the feel of being on a real “set.” This was back well before DSLRs and the need to sync sound. I was shooting with a Sony PD150. The slate was just a prop to entertain the clients (and some member of the bridal party always loved clapping the slate). So, yeah, the thrill of participating in movie magic was an element.

But another part of it for me was just the collaboration and camaraderie. As a classic extrovert, I thrive off of people connections. Also, that first set happened to be a comedy, so you have the added affect of shooting funny scenes and the contagious effect of laughter. All of that added to making the experience special for me.

So many filmmakers today talk about a Super 8 or camcorder as their first experience with a camera. With the video capabilities of cell phones now being so powerful and phones themselves so ubiquitous, what sort of an impact will that have on the next generation of filmmakers? Will there be that many more filmmakers, and/or will they be that much more ready to make a movie?

This may sound sad, but I think the next generation of filmmakers inherently just won’t have the same level of awe and respect for the craft. How could they? Back in the day when in order to shoot a movie you needed to 1) go to school or apprentice for years and 2) spend a lot of money when you made one, it was a huge deal. You could never take it for granted. Now, all you have to do is break out your iPhone and fire up YouTube for access to thousands of free online lessons.

Add on top of that the advent of social media services like Snapchat stories, Vine, and Instagram video, even the way the next generation tells stories will be changing. I think we’ll still have the traditional Hollywood “engine,” but more and more “indie” storytellers building their own audiences online will pop up. And they will approach the craft not in the traditional “I want to be a filmmaker” sense, but more of a “I want to tell specific stories online” (either for their friends and family, or in hopes of being the next Freddie W.).

The filmmakers who are creating movies that transcend the medium and are elevated to “masterpiece” status are typically filmmakers who have a love and respect for cinema of old. They have work that is clearly influenced by names like Kubrick, Leone, Kurosawa, and Bergman. Some of them, like Tarantino and Nolan, have a passion for actual physical film. I don’t see the next generation having that kind of love affair with cinematic history. I think the one saving grace is that the next generation will be influenced by the Tarantinos of today, so maybe vicariously they will also be influenced by the masters.

Not in the least. In fact, there are many people pursuing this craft who may be better off creatively to keep it “on the side”. When you have to starting taking jobs you loathe so that you can make ends meet, your love affair with your craft can start to wane. But if you make a living from some other source, and all of your filmmaking is purely for the love of the craft, and every project you shoot is one that you want to shoot, then both your love and your skill can grow.

Hearing about your choices when it came to casting your film is funny in light of how certain careers panned out, but I can’t imagine you would have changed things at the time even if you had known what the future held. How important is it to make that kind of commitment to a creative process?

It’s vitally important to make creative decisions that are for the best interests of the film. I know that realistically that’s not always going to be the case, especially in Hollywood. But you should at least start from that vantage point.

Creative collaboration can be challenging. Whenever you get multiple artists in the same room to create something, you’re bound to run into debates and incongruity. In order to get through those discussions and disagreements to the other side, you need to have a passionate commitment—that is, if you want the end result to be of any quality. But, as was alluded to in episode 3 “S.O.S. Atlantis”, it’s imperative to clearly delineate who owns what and who makes the final call (lest you have your own epic “Defcon” arguments like I shared). But, whether you’re the captain of the ship, or just an “ensign”, I think you need to have that commitment to the art.