Abode Encore reached its end-of-life with CS6, but you can still install it with Creative Cloud, with a few extra steps. 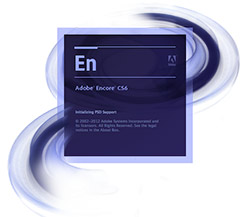 You can download all CS6 apps from the Creative Cloud Download Center on the Adobe website or click More information inside the CC app, as noted in Creative Cloud Help/ Download previous versions of Adobe Creative applications. Since Encore is part of the Premiere CS6 Family installer, you download that installer. If you already have Premiere CS6 installed, you'll have to uninstall it and start over (and you might end up with Premiere CS6 even if you don't need it).

Note that you can download full library content/functional content from Encore Help. Adobe Premiere Pro and Encore CS6 Functional Content is available here. You just put the unzipped folder into the same folder as the Encore app, and the next time you launch Encore — and click on the Library > General pulldown — the templates will load. It's a bit of pain but worth it for jump-starting designs that can easily be modified in Photoshop. Encore made it very easy to build and modify menus in Photoshop and After Effects.

If you're new to Encore (Help), check out Abobe TV, the Adobe Encore Basics series from Andrew Devis, and 2 hours or so of free Adobe Encore tutorials by Jeff Sengstack. Here's some samples:

Update: Jeremiah Hall added some recommendations for other software at Doddle in Adobe Encore Reaches End-Of-Life:

There are several flavors of videography who still require DVD / Blu-Ray creation: wedding and event videographers, corporate environments, as well as the indy producer. There are still other DVD creation software choices available, though at the pro and semi-pro end most seem to be Windows-centric. Sony offers several solutions for the pro-end and semi-pro end Windows-based user.
Vegas Pro 12, Vegas Pro 12 Premium and Vegas Pro 12 Suite all ship with DVD Architect Pro 6.0 for DVD and Blu-Ray authoring. DVD Architect Pro 5.0 is still available for individual purchase from Sony Creative Software’s website at a low $39.95.
And if you have serious Blu-Ray creation needs, Sony’s DoStudio product family of software is available, starting at $2395.00. Sony also has the Blu-Print 6 Blu-Ray disc authoring system available, designed for pro high-volume disc production houses (contact Sony for pricing). Mac users who need Blu-Ray authoring can turn to Avid. Avid Media Composer 7 ships with Avid DVD, though it is a Windows-based program. Avid says Mac users will need to use Windows-emulation software on their machines in order to use it.