3D models and particles inside After Effects [updated] 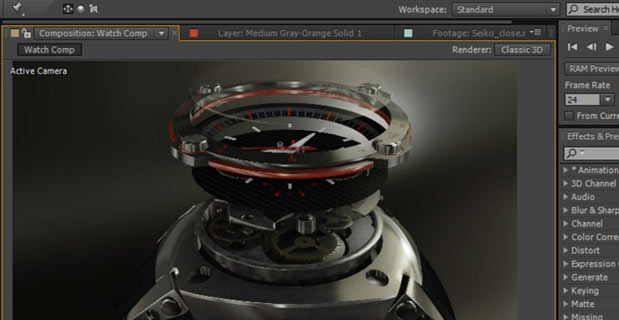 Video Copilot has released Element 3D, an After Effects plug-in that lets you import and animate 3D models, even as a particle array, and extrude text and mask shapes in real time. It's useful for all of us, for newbies and old hands & for straight 3D and more abstract experimentation, at least if you have a more recent OpenGL graphics card. {C}

Video Copilot is offering easy access to the impressive plug-in itself, with tiered pricing for various bundles of 3D models and materials. While not quite a Fast Ray Tracer, Element 3D (codename Atom) could soon be as ubiquitous as Trapcode Particular, and joins a growing cadre of exciting but somewhat isolated 3D technologies like Freeform, Plexus, Form, Mir, Pixel Cloud, Invigorator, Atomkraft, and others. Mylenium commented on AE's separate 3D universes and related wrinkles recently in The Element post you don't wanna read. Later, Mylenium also posted IBL Toolkit, image based lighting setup projects for E3D.

Element 3D does have some limitations compared to regular AE layers, and as Todd Kopriva noted in his story, you can get forum answers, help, support, and updates & bug fixes at the Video Copilot website.

Element 3D update v 1.6.2 fixes miscellaneous bugs and has an updated installer for After Effects CC 2014.

We could list Element 3D's feature list, but seeing it in action is best – Andrew Kramer and company at Video Copilot posted a handy Help page video list. Here's a sample (they have even more when you buy a license).

There's already a a full video review of Element in Arabic and another in French:

Michele Yamazaki of Toolfarm has an Interview with Video Copilot on Element Launch Day:

CrestVFX posted Video Copilot Element 3D Product Review, which ends with physics animation with Mamoworld iExpressions (you could use Motion Boutique Newton too):

And Charles Yeager posted Tips on Getting the Most From Element 3D:

If I say Element 3D crack here, will I get more hits?