Shooters: Give this a read for better insight to what editors want

I was recently working on an edit that used footage captured by two shooters covering a weekend event. The shooters had two different shooting styles. One chose to mainly keep the camera rolling when composing images and finding different shots so there were long clips with a lot of repositioning of the framing and finding focus. The other would, for the most part, stop rolling after a shot choosing to get focus and composition before rolling. That meant the latter shooter’s folder was full of nearly 4 times the amount of clips as the former. In the end that have just about the same amount of media. This made me ask Twitter exactly what the editors out there prefer when it comes to this question.

I was recently working on an edit that used footage captured by two shooters covering a weekend event. The shooters had two different shooting styles. One chose to mainly keep the camera rolling when composing images and finding different shots so there were long clips with a lot of repositioning of the framing and finding focus. The other would, for the most part, stop rolling after a shot choosing to get focus and composition before rolling. That meant the latter shooter’s folder was full of nearly 4 times the amount of clips as the former. In the end that have just about the same amount of media. This made me ask Twitter exactly what the editors out there prefer when it comes to this question.

I’ve been editing for many years and have not really had an opinion on this question. In the old days of only Avid Media Composer and Final Cut Pro dealing with both of these styles of shooting meant making selects via subclips and/or selects sequences. Today we have lots of options in our editorial tools with metadata, Search Bins, Keyword Collections, skimming and Hover Scrubbing. Sadly in Avid it’s still just subclips and selects sequences.

Discussing these different shooting styles is of course dependent on the type of project being shot. If you’ve got a number of cameras roaming around a concert for a multi-camera shoot you’ll want those camera ops to keep rolling at all times even with things like automated audio syncing and stellar multicam tools in PPro and FCPX.

To stir this discussion I asked the braintrust of Twitter:

What do you prefer as an editor from a camera op: one long clip w/ lots of repos to get a shot or stop record to get lots of single clips?

Here’s how the responses broke down.

Clutter is important in this discussion and really a personal preference for the editor. The more clips the more clutter and it can sometimes be a daunting task when looking at thousands of master clips in a bin.

One long clip. I can skim through faster and I’ve found some unintentional great cutaways in longer clips. @editblog

Alexandra’s point is one worth noting. There are often moments of gold found in those in between moments as the camera repositions and gets into focus. They are often hard to find and can be a real time suck as you try to identify them but they can be fantastic.

@editblog One clip, 90-hours-long, and a monitor the size of an aircraft carrier. (I’ll be sub clipping it anyway.)

I want to see Chris’ clip that is 90 hours long. Epic!

@editblog lots of little clips, shoot the 4 corners, many angles pls…after all how long can I hold 1 shot? After 5 sec it is too long..

I don’t agree that 5 seconds is too long to hold a shot but I would rather have more angles than less. Get the shot twice and move on to something different.

@editblog Would prefer lots of single clips so I can more quickly find all the angles / repositioning. 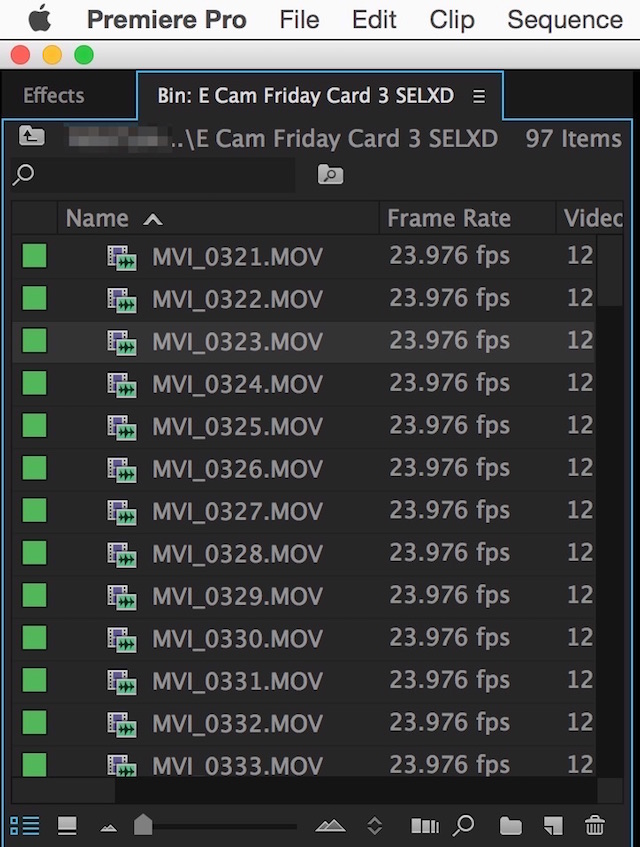 @editblog single clips. What do you see in the thumbnail is what you have

David brings up a good point. If we could get the camera op to always hit the record button when he/she is framed on a representative poster frame how great would that be?

@editblog I was just thinking last night that long clips with loads of different shots in them are one of my biggest pet peeves.

@editblog purely from short attention span I like short clips. I make subclips to make content more bite size for my focus.

Nate mentions subclipping. That’s a way to make your own shorter clips!

@editblog short clips for me! But understand if the subject/material needs the Op to continue running to capture certain moments/action.

Seth brings up another good point. The best shooters are the ones that can identify the situation at hand and roll accordingly. It really emphasizes the point that all shooters should try and edit their own stuff every once and awhile. And editors should shoot something as well to know what a camera op has to go through.

@editblog short clips always. If color grading is a next step, long takes just mean a LOT of copy time

And how about a little bit of both.

@editblog On tape it was long takes to ensure nothing got cut off. Now, it’s Stop Record to keep organized and file sizes down.

Ahhh tape. There was a time when we prayed for long clips as lots of short clips meant timecode breaks when digitizing the media. That was bad and sometimes fatal if you knew you had to online and uprez the low resolution offline media at a later date. The long tapes meant subclipping was an important piece of the editorial process. Sometimes I miss digitizing footage from video tape.

@editblog Depends – does it need to sync with another camera? If not – then single clips so I can use Icon view to preview them easily

Diego mentions Icon view. Looking at thumbnails is such a pleasure in Final Cut Pro X and Premiere Pro with skimming and Hover Scrubbing respectively.

@editblog it really depends. sometimes I use a reset as a creative choice. 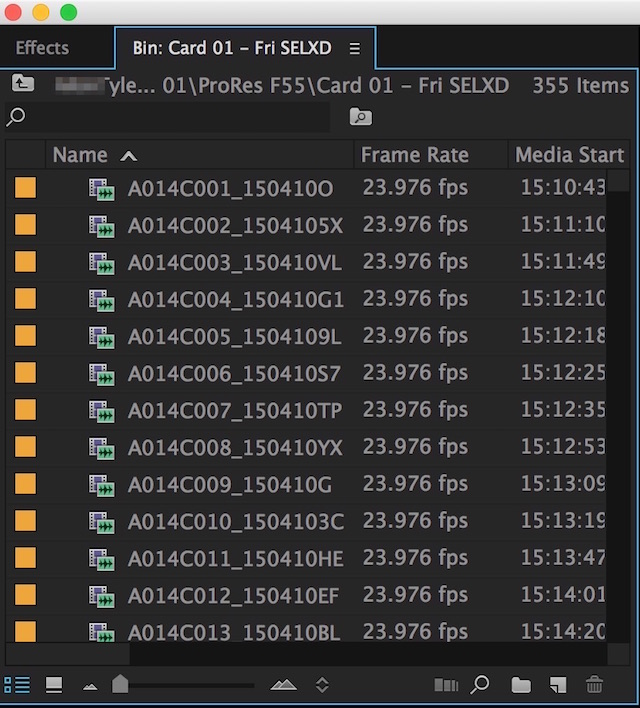 This shooter did a lot more starting and stopping during the day of shooting. Both gave me great coverage.

@editblog long if multi camera. Short clips if not.

@editblog no preference… Just a great AE to ingest & organize.

And Eric brings this little discussion home. Who cares what type of media you get in from the shoot when you’ve got a good Assistant Editor to prep it all for offline!

After working thorough this job I’ve come to decide my preference is more short clips with less repo and focus adjust. Moving through media in both Premiere Pro CC and Final Cut Pro X is fast enough that I come to quickly tire of sorting through the shaky camera and focus adjust. Am I giving up something and missing all the in between moments that might be captured by accident? Probably but no matter what style the shooter shoots you’re still going to be able to find some gold buried deep in there if you have enough time to mine the material. But that’s a discussion for another time: how much footage is too much footage when you don’t have time in the edit schedule to properly log the media?

I’d be curious to hear thoughts from the DPs and camera operators out there as to their opinions on this discussion and the idea of long shots vs short shots when acquiring the media. Please leave your comments below and we’ll continue the discussion.