A Color Control Panel for the 99%

It has been seven years since Blackmagic Design released the software version of Davinci Resolve for less than the cost of a cheap laptop. A professional color grading system, that once sold for a hundred grand was suddenly running on everyone’s iMacs for $995.

This watershed release was followed by a “lite” version of Resolve that was only slightly less feature rich but still just as powerful and completely free. Overnight, the work being done in the high-end grading suites, those places that charged $1500-an-hour complete with catered lunches and assistants, no longer seemed so distant.

We all learned how to color in Resolve, while we quickly learned the way that Resolve thinks about color. While we had access to an amazing new toolset for color correction, most users were learning how to navigate the UI with a mouse and keyboard.

The problem is, Davinci Resolve was not designed to be driven by these limited input devices. It is, and has always been, software built for a colorociter control surface. Specifically the Davinci Resolve Advanced Panel: an Audi-priced piece of hardware way outside the reach of everyone but the tiny community of professionals grading TV and Hollywood cinema.

Tangent Wave panels soon popped up in every post-house, there to grade corporate work and product launch videos. This was followed by the Tangent Element family of products. These are excellent devices, I learned to grade on a Wave with Apple Color, and continue to use one in Resolve doing short and long form projects. It still works like a champ.

A control surface, any control surface, promises the user the ability to do the work of coloring without ever having to take his/ her eyes off of the image. It’s the difference between playing a piano with both hands, and plinking out a melody one note at a time.

You’ll never get the experience of grading a series of shots using pure muscle memory if you don’t have a control surface. Most importantly, without a control surface, you’ll never develop the speed necessary for running a supervised color session with a director and three producers sitting behind you. Color is emotive, changes and iterations have to be tried and felt before decisions can be made.

Keyboard shortcuts and a Kensington mouse trackball will never let you simultaneously adjust color values in lift, gamma and gain. And that’s the difference between the 99% of folks coloring low-budget, corporate, indie or any other part of the content tsunami that washes over the internet everyday, and the professionals in the expensive seats.

THE MICRO DOES LESS, BUT REALLY FAST

The Davinci Resolve Micro Panel ($995) from Blackmagic Design works better than the Tangent Wave for almost all of my color work. However, the Micro lacks support for adjusting qualifiers and applying windows. I can do that on the Wave, although I have to tab through menus which change the functions of the buttons and knobs on the surface.

Note that this is why The Wave was so popular — the ability to change modes and drive most functions of Resolve from a control surface rather than investing in a giant console of individual dedicated controls like the Advanced Panel or a Tangent Element.

This is also its Achilles Heel. Even with years of using the Wave, I struggle with memorizing each mode and hence I am looking down at the little LED labels to guide me. My eyes are always darting off the screen.

The Micro Panel gives me an immediate physical, tactile control surface of all the controls in the “Color Wheels” Panel in the Color Page of the Resolve UI. I have Primary Wheels (or Bars or Log) Trackball controls with rings.

The build quality is what we’ve all come to expect from Grant Petty and his team at BMD, but it’s worth giving a shout out anyway. The Micro Panel feels like it was chiseled right out of the $30,000 board. There’s nothing delicate or wobbly about it. The unit I worked with was as solid and tight as a submarine. The knobs, rings and trackballs all butter smooth.

RINGS AROUND A TRACKBALL ARE EASIER TO USE

The Micro Panel uses a ring-around-the-trackball. After a day using the Micro, I am a ring-around convert. My hands and fingers have far less travel distance as compared to the knob-above-trackball of the Wave. The experience of grading with the Micro has about the same amount of physical exertion as typing. 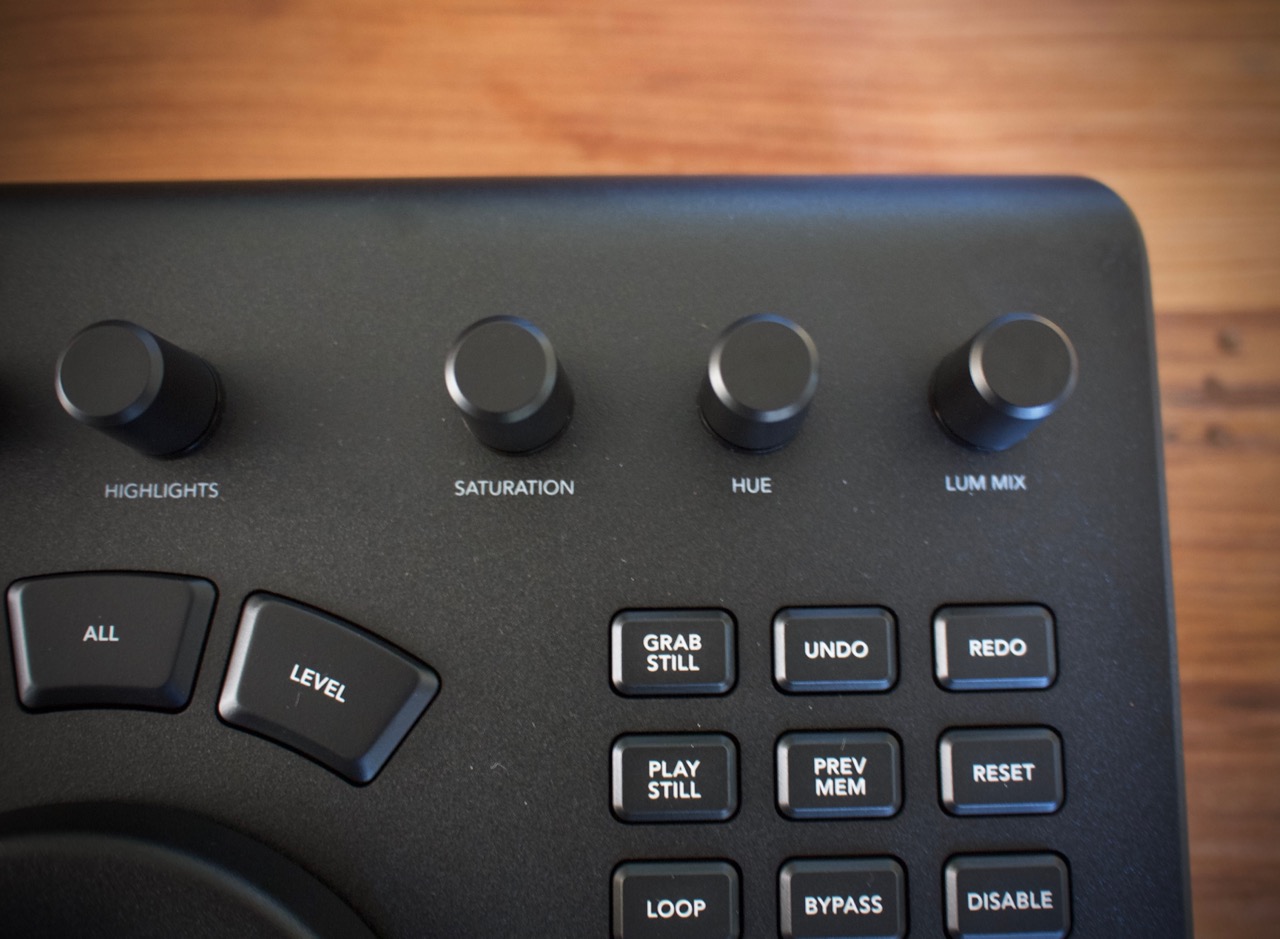 There are three buttons on the left of the panel: Log, Offset and Viewer. Log knocks the trackballs into Log mode, naturally. Offset makes the Right Ring-Trackball controller the controller for Offset, while making the left ring for Color Temp and the Middle Ring for Tint. Viewer toggles your UI into a Fullscreen Viewer mode. This is super handy and will be the go to button for all the MacBook Pro Colorists. 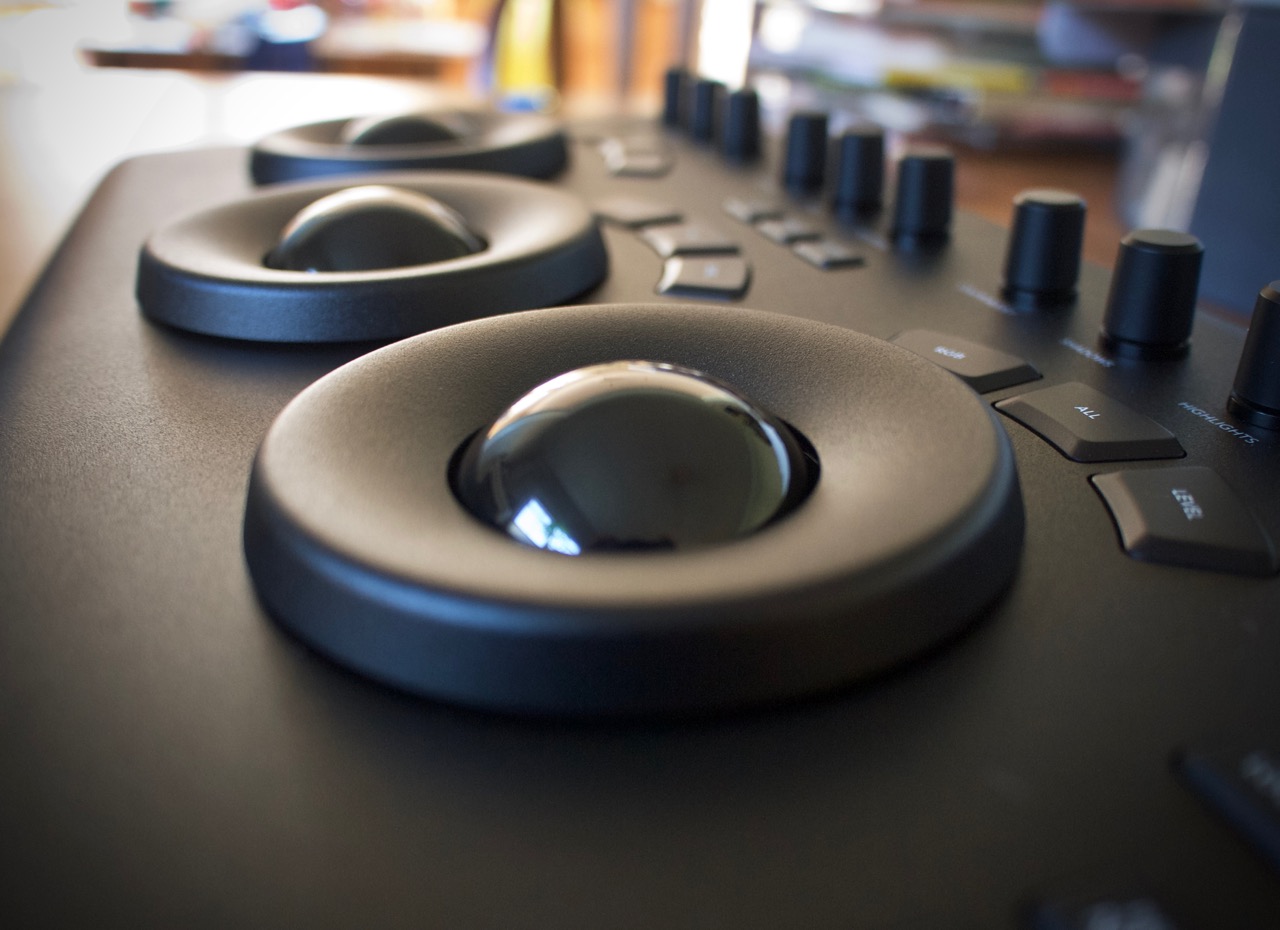 Beneath the knobs and right above each Ring and Trackball, there are reset buttons: RGB, ALL, and LEVEL. RGB resets the hue trackball, Level resets the ring value and ALL resets both.

Along the right side of the unit there’s 15 buttons for saving, comparing and storing grades you’ve made, as well as navigating between nodes and shots. These are essential for building a grade, as well as doing the really important work of shot-to-shot matching. 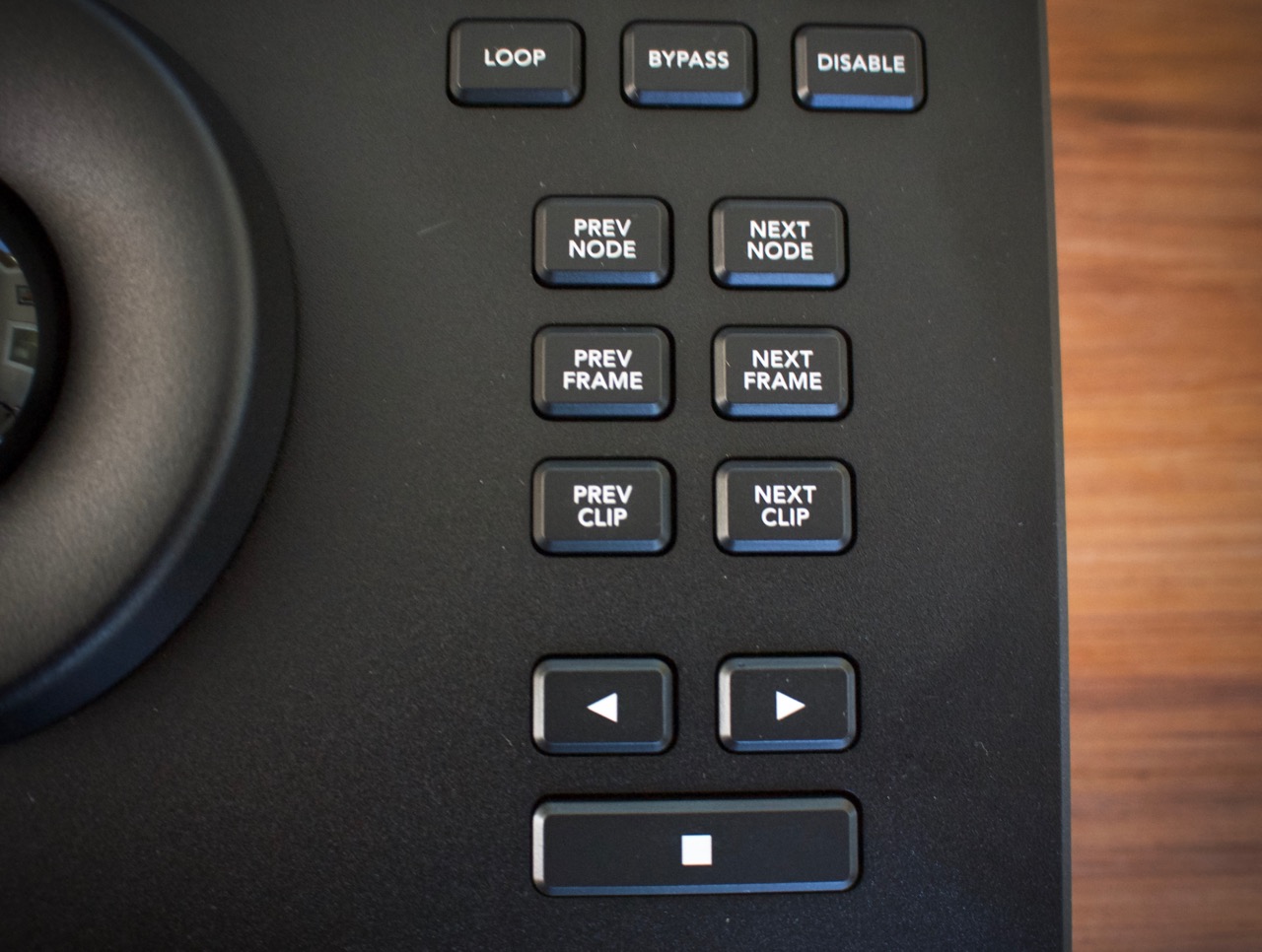 Below those buttons are three simple transport buttons: Play, Reverse and Stop.

And that’s it. The knobs and buttons you see on the surface are the controls you have access to. Everything else: qualifiers, keyframes, applying grades from other shots, adjusting curves and the fifty million other things Resolve does, you’ll have to look away from the screen and navigating with a mouse and keyboard.

You can very quickly build base grades, match shots, try out ideas and iterate with the Micro Panel. This is not a small thing, that’s 80 percent of what you need to do. And for less than a thousand dollars, this is a fantastic bargain. It connects to your system and draws power from a single USB-C cable. The unit ships with a USB-C to USB cable so it works with that old iMac you’re still grading with.

SHOULD I BUY THIS?

If the bulk of your color work is grinding out basic grades, fixing white balance and making sure skin tones are legit, then this is all you need. If you need to carry something from shop to set because you’re the editor-colorist-DIT, this is all you need. Maybe think about some of those cool midi-controllers DIY rigs for controlling the things the Micro doesn’t.

The DaVinci Resolve Micro Panel is a worthy investment even if color grading is something you do a few times a week. Your grading will improve because you’ll be working in DaVinci Resolve the way it was intended.

Serious colorists don’t need the Micro Panel, they need the DaVinci Resolve Mini Panel ($2995) and all the things it can do that keeps them away from the keyboard and mouse.

If you already own a Tangent Wave or Element set up, don’t dump it. If your system is working great, and you’ve built all the muscle memory, why learn a new panel? I know saying that will not stop the fire sale on Tangent gear that’s already burning on eBay, but really, don’t panic.

If you are not coloring in Resolve, you do not need this panel. It is called the DaVinci Resolve Micro Panel because that’s the only program it works with. Don’t expect this to work with Premiere Pro CC or FCPX or anything that isn’t DaVinci Resolve.
If you’re not coloring in Resolve, consider what Blackmagic Design is offering in terms of capability and cost: free software plus a $995 color control surface is an incredible bargain.