Take care of your eyes, they’re your most valuable post production tool!

More than anything, editors and motion graphic designers have one tool that more important than anything, and that is their eyes.  You eyes are probably the most important tool you have, and eye strain can be an absolutely debilitating problem if you’re not paying close enough attention to what your eyes are telling you.  In this article, I thought I would look at a few different issues when it comes to your eyes, and eye strain and more specifically Computer Vision Syndrome (CVS), to try help you keep your eyes (and you) as healthy as possible.

Chances are you’ve already experienced symptoms of eye strain, and don’t even know it.  The first, and most obvious sign is sore, tired and/or itchy eyes.  Most people immediately think that with a couple of eye drops, this will go away.  And in most cases it will….temporarily.  The next symptom is headaches.  There are days where eye strain can cause headaches equivalent to that of a migraine, but as editors, you just have to plow through, and get the job done.  Other symptoms of eye strain can be general eye discomfort, difficulty focusing, watery or dry eyes, blurred or double vision, and an increased sensitivity to light.  Now, as an editor, i’m working with at least two monitors and in many cases, up to four monitors.  I work with dual monitors for my editing system, a client monitor, to see what everyone’s going to see when the piece i’m editing “goes to air”, and lastly, I have another monitor that has all my external VU meters, as well as Waveform/Vector Scopes as well.  That’s a lot of light coming from different sources a few feet from my/your face.  So that does beg the question.  Is it a simple matter of turning down the brightness on the monitors to help solve the problem.  Unfortunately, the answer is no.  So, what’s really going on here.  Well, let’s dig a little deeper.

Eye Strain and, more specifically, Computer Vision Syndrome (CVS) is becoming more and more of an issue every day.  I’m not going to go into a huge scientific explanation about the light spectrum, and where all the colors fall into it, but needless to say, Blue Light (also known as HEV light) is bad.  If you take a look at the image below (from allaboutvision.com), you can see that Blue Light, and UV light fall towards the bottom of the spectrum 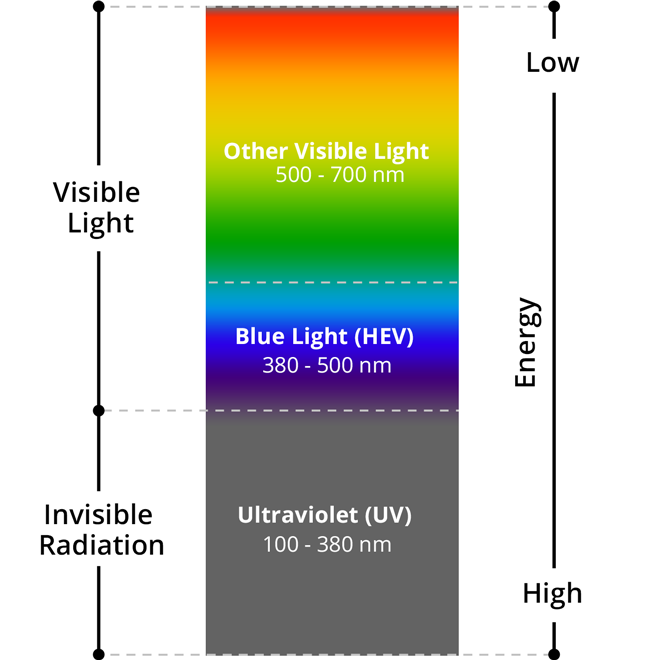 So, you’re probably thinking “Well, what the big deal?  Who cares about Blue Light and UltraViolet light.  I’m not out getting burnt in the sun!”.  While that may be true, Blue and UV light create two bigger problems, especially for editors and designers in the television/film industry.  What you need to know, again, in a non-scientific way from allaboutvision.com, is that:

There is an inverse relationship between the wavelength of light rays and the amount of energy they contain. Light rays that have relatively long wavelengths contain less energy, and those with short wavelengths have more energy.

So, looking at that image above, all the light that falls into the 500-700 nm range are considered long, weaker energy wavelengths.  Anything that falls into the 100-500 nm range are considered shorter, stronger wavelengths.  As you can see that is the range for both UV and BL.  So what does that mean for us?  Well, the first big issue is that our eyes have a problem filtering out Blue Light (BL).  No big deal, right?  WRONG!  All our devices, televisions, computer screens, iPads, iPhones, etc, emit BL.  That means that BL is going directly into the Macula of your eyes.  You’ve hearn of Macular Degeneration, no?  Well, that’s what’s the over exposure to BL is doing.  The UV light, on the other hand, is doing something slightly different.  We all know that the UV in light is what we wear sunscreen to protect our skin from, to try to avoid skin cancer.  Well, it’s the same with our eyes…..sort of.  The UV light, that is going into our eyes can cause another condition called photokeratitis or, basically, sunburnt eyes.  One other thing that’s exceptionally important to mention about BL is the negative effect it has on your sleep patterns.  Have you noticed that Apple has added a “Night Shift” feature to iOS that changes the color of your screen from a very blue color, to a more orangey look?  That’s because of the negative effect of blue light on sleep patterns.  What is very interesting about this is that if you were to look up apps that you can buy that do a better job of filtering out blue light, you’ll notice that there aren’t any.  Currently iOS doesn’t allow developers to access the Private API’s that developers need to make these types of apps work on iOS.  I don’t want to say that I’m not surprised, but I’m not surprised.  Now, we’re looking at the worse case scenario in these cases.  Think long term.  We’re talking more specifically in this article about short term problems, specifically, eye strain, which causes most of the health problems I listed above.  Solve the short term problem, solve potential long term problems.  So, how do we go about doing that.  Well, let’s take a look.

GET YOUR EYES CHECKED

This sounds like a funny one, but when trying to narrow down the cause of your vision problems, you might just be getting old (sorry, someone had to say it), and what you’re experiencing is just the natural course of your eyes getting old.  Rule out any issues with your eyes before moving onto dealing with CVS symptoms.  Sometimes it’s something as simple as needing reading glasses that can help with a lot of eye strain.

LAY OFF THE DEVICES

I know that this might seem like an easy thing to say, but every little bit helps when battling Computer Vision Syndrome.  When you’re done your 9-5 (yeah right.  Find me an editor or motion graphic designer that works these hours….but you get what I mean), try to lay off the iPhone, iPad, TV, etc, and give your eyes a break.  If you have multiple displays for when you’re working (client monitor, Waveform/Vector Scope), turn those monitors off until you need them, and then toggle them on/off as necessary to give your eyes as much of a break as possible.

Now, as much as you might not be able to lay off the devices, there are other things you can do to help your eyes out.  On thing is the 20-20-20 rule.  Every 20 minutes, focus on something 20 feet away for 20 seconds (Thank you Canadian Association of Optometrists!).  I know it doesn’t sound like a lot, but giving your yes one minute of a break each hour is something you can easily commit to!

If you are an editor/designer that works in one room all the time, this one is relatively easy to implement, but there are a ton of options, so bear with me here.  First, don’t get confused between Privacy screens and Glare Reduction Screens.  Although some Privacy Screens offer Glare Reduction, they are not the same thing.  These days, the most common type of Glare Reduction “Screens” are ones that are link an actual film that goes on overtop of your actual computer screen, much like the image you see below. 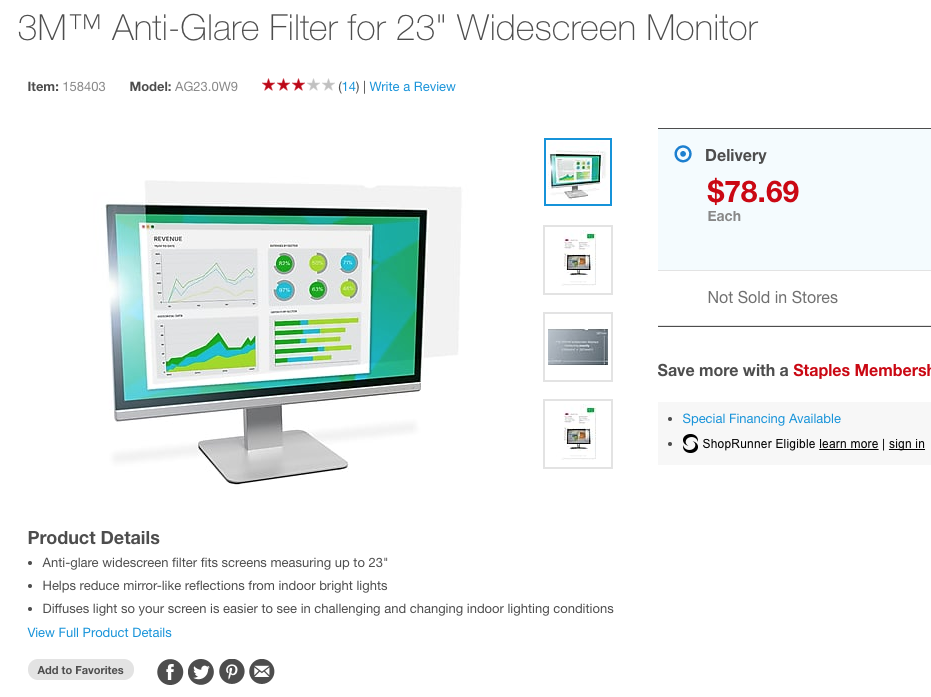 These ones go on your computer screen, much like a screen protector for an iPhone.  As you can see from the image, this one is about $80 Canadian (at Staples), but you will need to make sure that you choose the correct sizing, or you’re going to be in for a bit of a headache, literally, getting it to work properly.  The big advantage to these is that if used properly, they will fit on your screen, and you won’t even notice them.  The bad side is that it doesn’t reduce the amount of Blue/UV Light going into your eyes.  So is there another alternative?

These are really the best alternative, when it comes to reducing that Blue/UV Light that’s going into your eyes, and battling Computer Vision Syndrome.  Computer Glasses, and in this particular case, Gunnar Glasses, do just that.  They not only reduce glare, but also tackle that pesky Blue/UV light issue that is at the root of many people’s problems.  BUT, and there’s a big but, you’ll notice by the below image, that the glasses have a yellow tint to them, to handle the Blue/UV light issues. 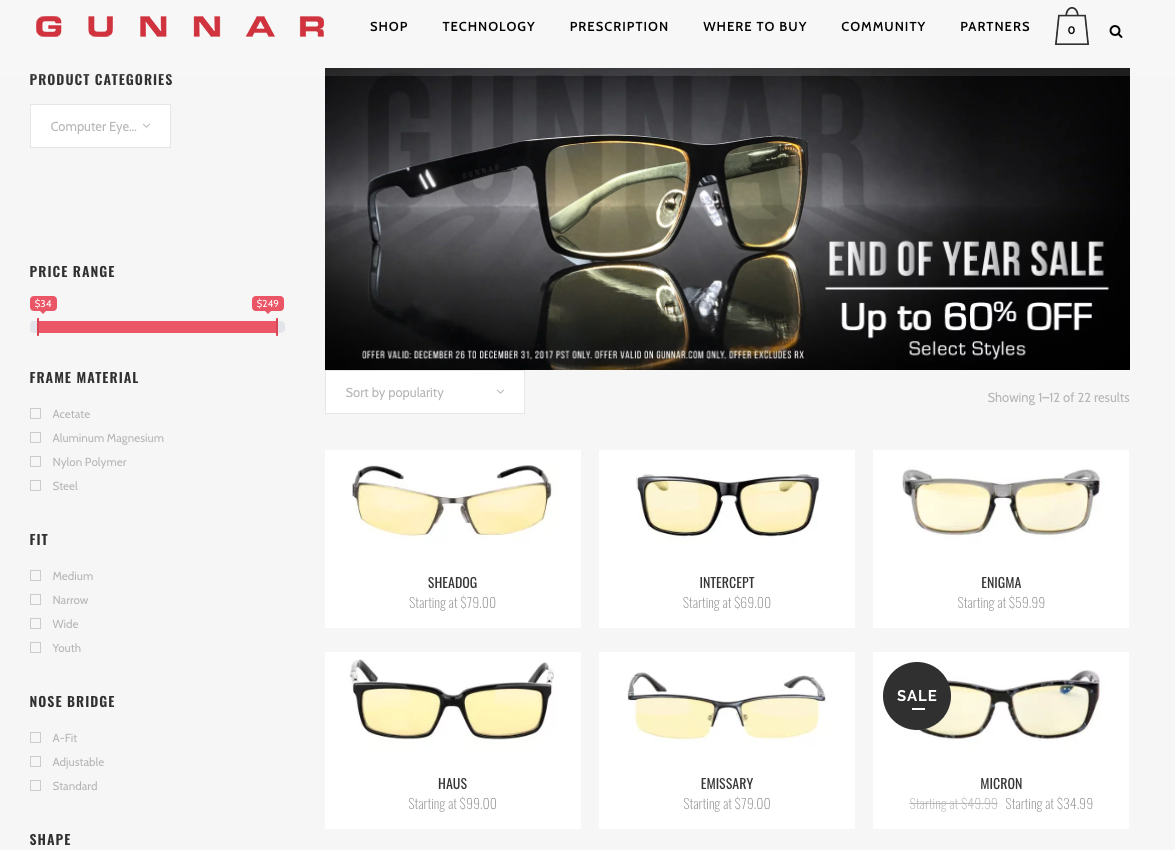 Obviously, this is not ideal for color grading, and even after effects work, but you can work with these types of glasses by alternating between using them when doing something like just editing or audio mixing, and then remove them when you’re ready to do color grading or After Effects work.  To be honest, in many cases (other than color grading), you can just keep the glasses on for 90% of your graphics workflow, and only remove or lower the glasses, when you need to see a specific color, or a specific animation you’ve created.

In the end, many editors who wear glasses could very well already have glare and UV blockers included in their lenses, so they’ve already fixed 90% of their problems when it comes to Computer Vision Syndrome, but keep in mind that it’s really that pesky blue light that’s coming at us from all directions, that needs addressing, so you can keep your most valuable post production tool, your eyes, as healthy and happy as possible.  For more information about Glare Reduction Screens, you can check them out at your local Staples or Business Depot.  For more information about Gunnar Glasses for both computer screens and gamers, you can check them out at www.gunnar.com, and finally, for more information on Computer Vision Syndrome (CVS), you can check it out here!