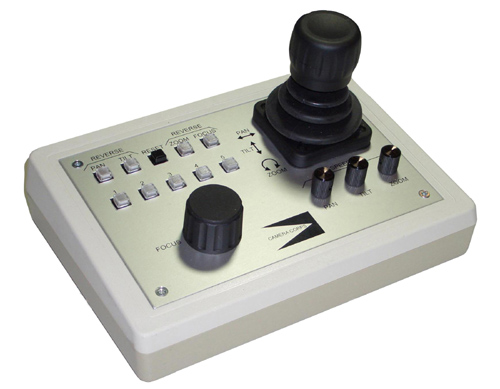 “Mini Joystick Control was developed for applications such as commentator-camera control or for outside-broadcast vehicles where desk space is often very restricted,” comments Camera Corps’ founder and Managing Director Laurie Frost. “It is extremely easy to use and ideal for fast-response on-air operation. The joystick and control buttons have the same tactile responsiveness as those on our full-size controller, including fully adjustable pan, tilt and zoom speeds and reverses. Zoom is controlled by rotary twist of the joystick. Up to five separate heads can be operated from a single panel. Reverse settings and control speeds for each of the five channels can be stored in non-volatile internal memory.”

“The standard Camera Corps audio data communication system is employed to allow unlimited operating distances between Mini Joystick Control and the remote heads,” adds Technical Director Jim Daniels. “Each of the five channels has its own red and green cue/tally light switch. Individual channels can be locked to prevent inadvertent alteration of presets. Focus can be remote-adjusted manually or switched between manual and automatic when used with cameras that support these features.”

Exhibiting in the Central Hall, Camera Corps will be represented at NAB Show 2010 by Laurie Frost, Jim Daniels and Director of Operations Matt Frost.