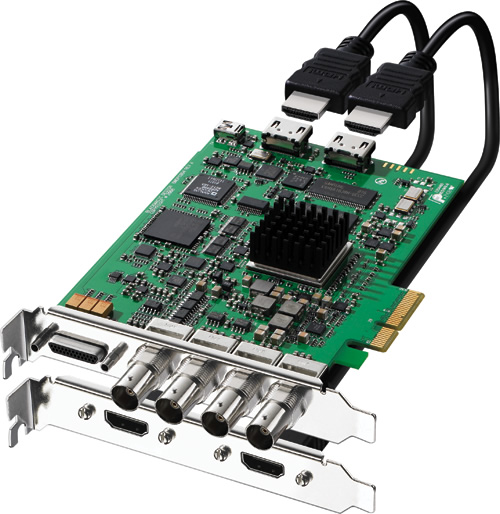 The DeckLink HD Extreme and all Blackmagic Design products will be at Blackmagic
Design’s Broadcast Video Expo stand located at G14.

DeckLink HD Extreme is the world’s first capture card to feature SDI, HDMI and
analog component, NTSC, PAL and S-Video capture and playback, combined with Dual
Link 3 Gb/s SDI technology, and hardware down conversion for only £715 / US$995
/ €775.

With SDI, HDMI and analog video capture and playback, combined with both balanced
analog and AES/EBU digital audio, DeckLink HD Extreme lets customers connect
to all decks, cameras and monitors. DeckLink HD Extreme instantly switches between
SD and HD video, so is the ideal solution for all post production and broadcast
users when working on design, editing, paint and effects tasks.

With built in 3 Gb/s SDI, DeckLink HD Extreme can also instantly switch to full
resolution 2K feature film editing. DeckLink HD Extreme also includes built in
hardware down converter so users can monitor both SD and HD at the same time
during playback and capture.

Availability and Price
DeckLink HD Extreme is available now and in stock for only £715 / US$995 / €775
from all Blackmagic Design authorized resellers worldwide.