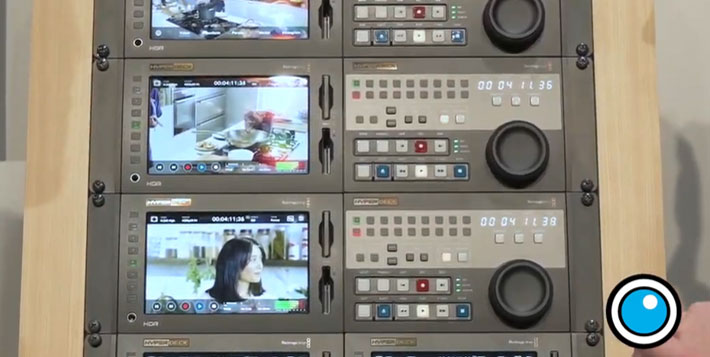 With 8K becoming extremely popular, Blackmagic Design shows at NAB 2019 its new ATEM Constellation 8K, an Ultra HD live production switcher with so many features, you can combine them all to make an incredibly powerful 8K switcher! Users get, says the company, “4 M/Es, 40 x 12G‑SDI inputs, 24 x 12G‑SDI aux outputs, 4 DVEs, 16 Keyers, 4 media players, 4 multi viewers, 2 SuperSource and standards conversion on every SDI input! Then when switched to 8K, all these features combine to make a powerful 8K switcher! “

Also new at NAB 2019 is the HyperDeck Extreme, which has an innovative touch screen user interface with deck controls as well as a large screen to view your recording. Then add a HyperDeck Extreme Control for traditional broadcast deck controls and a large shuttle knob that feels incredibly luxurious to use!, says Blackmagic Design. There is more, though, as you can even rack mount the HyperDeck and the controller! HyperDeck Extreme also includes 2 media slots, Quad 12G-SDI for 8K, analog connections for archiving, USB‑C external disk recording, plus a front panel speaker and headphone jack! There’s also an optional cache that eliminates dropped frames if your media becomes full or is too slow. Both AC and DC power connections are also included for studio or on location use.