Just the other day I posted links to VideoToolshed, a resource for a number of handy software utilities gear toward the video editor. One of those tools was QtTools, which has been rebranded as qtChange02. I posed the question asking if it could batch extract empty audio channels from QuickTime files. Bouke, the proprietor behind VideoToolshed, said he would add the feature and he did. In the comments David Heidelberger posted and said that he had already written an application to do just that. Audio Track Batcher. Let’s see how these tools might work to correct a capture problem where you media has too many audio tracks.

First there is the question of why you would ever need to extract audio channels from a QuickTime file. I recently worked on a job that was captured from DV tape SDI via an AJA Kona card. SDI can have 8 channels of audio but when the tapes were captured the assistant didn’t turn off channels 2 – 6: 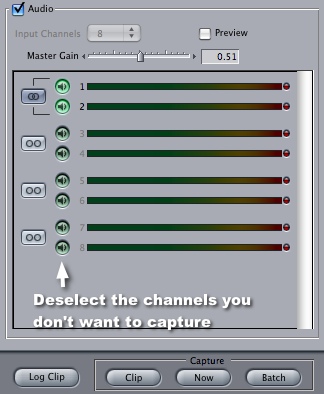 When the capture was complete, all the clips had 8 audio channels with actual audio only on stereo channels 1 and 2: 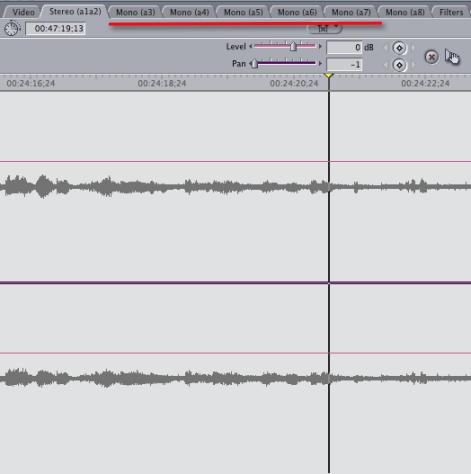 This may not seem like a big problem, especially if you don’t have much footage, but what really bothers me is that each time I load one of these clips into the Viewer I am then stuck with an extra 6 channels patched into the timeline that I would never want to actually edit into the timeline. And I don’t want to have to unpatch the connections via keyboard or mouse over and over: 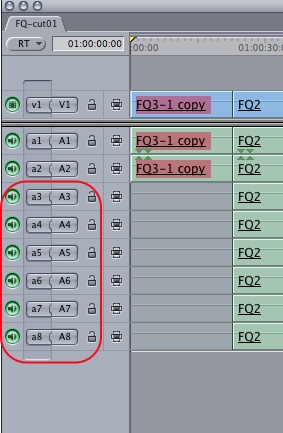 That’s where the QuickTime batch utilities come in. They can reach into a QuickTime file and delete audio tracks. You always been able to do this with QuickTime Player but it was a one track at a time kind of thing. Not very fun when you have lots of clips to modify. One caveat here, this is a DESTRUCTIVE action you will be performing. You should only use this method if you are sure of what you are doing. Once the tracks have been deleted they aren’t coming back. In fact you really shouldn’t have to do this in the first place if your media was captured correctly but every now and then you may want the option. 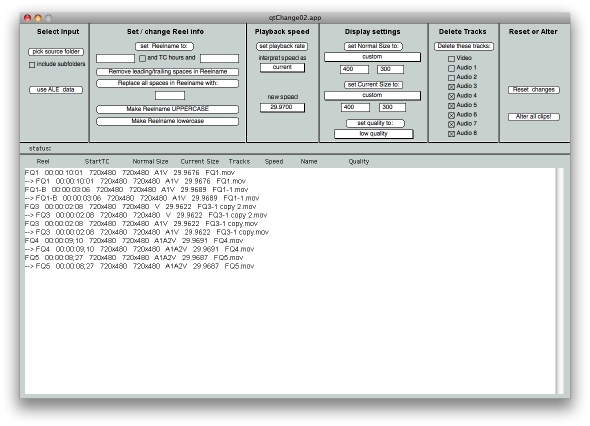 qtChange02 from VideoToolshed will do a whole lot more to a QuickTime file than just delete audio tracks, hence its ability to really screw things up if you aren’t careful. It can also do things like change reel information, as well as change playback speed and display settings: To alter the audio tracks you load up a folder of clips, check the tracks you want to delete, click the “Delete these tracks” button and then click “Alter all Clips!” One thing to note about this app is you can’t load a single file at a time, you have to choose an entire folder. And the app gives you a warning that you are about to change your original file: 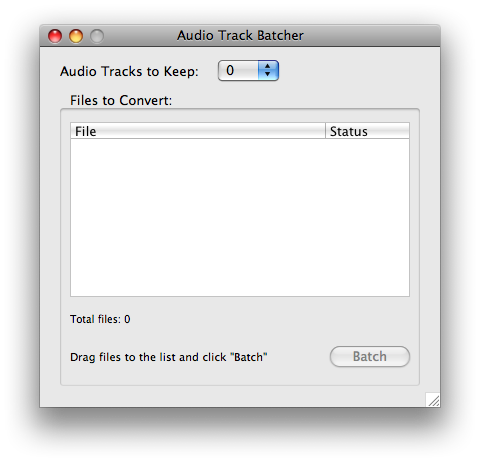 Audio Track Batcher is much simpler in that it does one thing, removes audio tracks. Launch the app, drag in the clips to be altered, choose the tracks to keep and click batch. The creator has noted issues with this kind of operation that was introduced with Final Cut Pro somewhere in the 6.0-updates but seems to be fixed in the new FCP 7. But if you aren’t using FCP 7 (and since this is a question I wouldn’t use the application at all with anything other than 7) you get plenty of warning. This is the last of the 3 warning boxes:

If you ever did have to take such destructive measures to your video files I would first back them up in case something goes horribly wrong. And always do a test on one file first then check both the before and after with the picture, timecode, audio that is left behind, etc. And definitely do this BEFORE you start editing. If not you’ll get one of these warnings and they always make me uneasy: 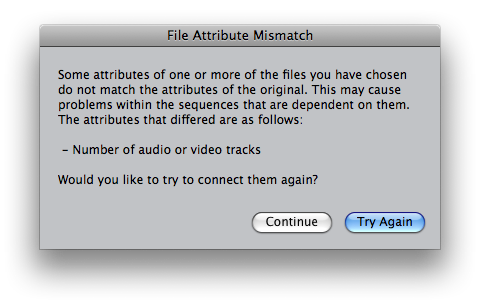 I wouldn’t (actually didn’t) even have the master clips in an existing FCP project. I altered my clips, then created the FCP project and began editing. But the way to avoid a situation like this is to properly check your media before you begin capture and setup all aspects of the capture accordingly. Nothing is as easy as doing things right the first time.