What’s cooking in the lab (and apparently close enough to tease us with). 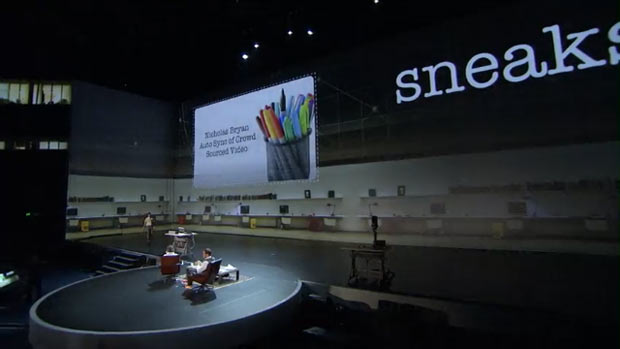 Adobe’s big annual MAX conference finished a couple of weeks ago, and as part of it they included a series of technology sneak peeks. I’ve gone through the videos posted on AdobeTV and pulled out the ones of most interest to us video folks:

In this video, Sylvain Paris will show you a sneak peak of a potential feature for editing videos, including the ability to create 3D fly-throughs of 2D videos and change focus and depth of field.

Think “automated Vanishing Point Exchange on video.” I also noticed that the outlines for the rotoscoped actor looked considerably different than the current implementation of Roto Brush in After Effects…

In this video, Nicholas Bryan shows you a sneak peek of a potential new feature for video editing software that synchronizes video clips taken with different cameras and different vantage points into a single, immersive video.

Many of you are probably aware of Plural Eyes, as well as the new sync function built into FCP-X; this demo and the one below indicate Adobe is aware as well – and seems to be planning to do something about it.

In this video, Brian King shows you a sneak peek of a potential new feature for automatically replacing the dialog of a video clip with separately recorded audio with near perfect synchronization.

This general concept is hardly new – VocALign has existed for ProTools for quite some time now – but it would be nice to see it integrated into a video editing system.

In this video demo, Jue Wang will show you a sneak peek of a potential new feature that allows users to remove blurriness from digital photos caused by camera shake while the pictures were being taken.

This video has probably gotten the most buzz from MAX. Advanced users have been asking for a similar function to be built into AE’s Warp Stabilizer. The standard reply in the past was that a reliable version of this technology has not yet made its way out of the lab, let alone into video applications; the demo above may indicate Adobe has more confidence about this feature becoming reality sooner rather than later.

Missing from MAX was their joint presentation with NVIDIA at the recent SIGGRAPH demonstrating ray-traced extruded text and shapes inside a “motion graphics environment” (as opposed to the currently less-than-optimal workflow from Photoshop to After Effects). I was surprised to find many users had not seen this yet, so I included it above.

Of course, Adobe has not announced software versions or release dates for the above technologies, and we’re personally among the most cautious when it comes to demonstrations versus shipping product. However, Adobe has a pretty good track record in this regard – and it’s always nice to dream…

FTC Disclosure: Although we do work for Adobe from time to time, Adobe did not ask us to share the above information, and did not compensate us for doing so. I just saw it come across the After Effects Facebook page today, and thought some of you would find it interesting as well.