The incremental update gets some new features, Mercury still screams 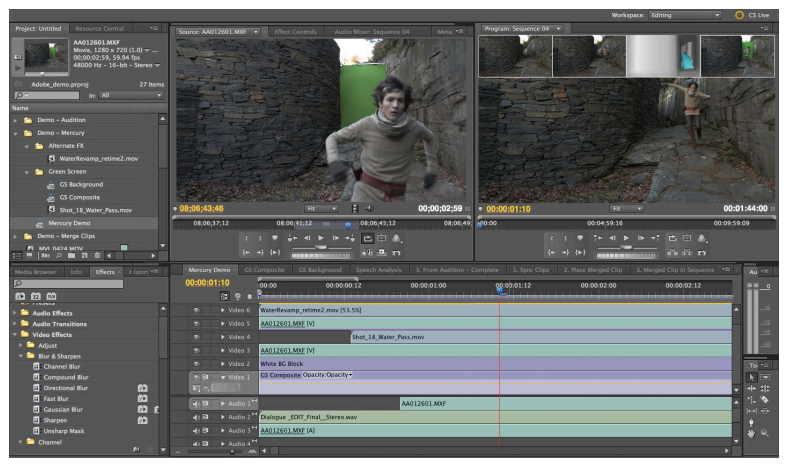 Here we are at NAB again and here’s another release of Adobe Premiere Pro (and the entire Creative Suite). This year’s release isn’t quite the watershed release that last year’s CS5 was but Premiere Pro CS5.5 packs some very nice updated features in overall, while still ignoring a few that I personally think they need to address to keep it moving forward and winning in the minds of editors.

This incremental .5 update marks a new way in which Adobe will segment their releases. If they are able to keep the planned schedule up it’ll be every other year for a major version upgrade. Last year saw CS5 and if I remember correctly it was NAB 2009 when we got CS4. Like Avid with Media Composer, Adobe has been aggressively updating Premiere Pro. With fast upgrades often comes spending money and digging into the technical side of editing as you upgrade the software (and often other components of your computer). These releases might be too fast for some so it’s good to see Adobe lay out a road-map for the future. I’m not sure if they’ll be able to exactly stick to the schedule as there’s bound to be bumps in the road when working with software as complex as the Creative Suite but it at least gives editors and facilities a way to plan.

PPro 5.0’s Mercury Playback engine was by far it’s showcase feature. Add the right NVIDIA GPU and the editor was given astonishing realtime playback for very processor intensive media like native H.264 clips from Canon DSLRs. This feature alone give PPRo some inroads where it might not have otherwise made any. As an extension of the DSLR workflow, PPro 5.5 has added a new Merge Clips function that can take separate video and audio and merge those into a new clip. Media Composer and Final Cut Pro users have had this for a while. FCP has often had some media management issues with merged clips so we’ll see how well this works after a bit more testing with PPro. 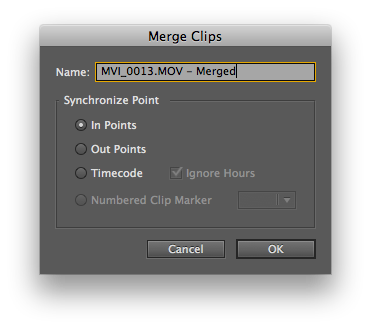 How it works is simple. You select both the video and audio and choose Clip > Merge Clips (or right + click on the selected clips). There you’ll set the sync point by IN or OUT point, timecode or a Numbered Clip Marker. While making IN points with a slate is quite simple it can be time consuming with a large number of clips. That’s when you’ll come to appreciate the ability to sync dual system sound via timecode.

These Merged Clips can support 16 channels of audio so that should be enough to cover most applications. Adobe even suggests that “to streamline project management, the original master component clips can be deleted from the project, leaving only the merged clips.” That’s confidence in the Merged Clips. Personally I would just toss them into their own folder to get them out of the way. I’d just feel more confident knowing they are still around if I need them.

One thing that I did notice is that when you merge clips both tracks of audio seems to be included. This is a true merging of clips instead of replacing audio of the video clip with another. If you’re shooting dual system sound for DSLR media you’ll have to mute or delete the camera audio if you don’t want it in the timeline. It would be nice if there was a way to tell it to only include certain pieces of audio. 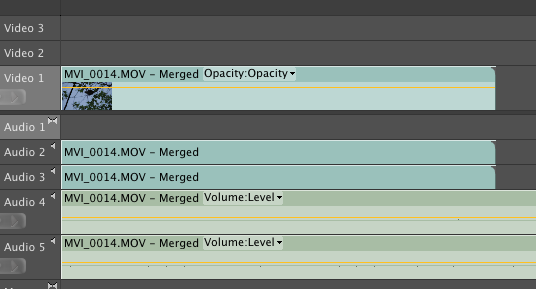 You can see the Merged CLip above includes both the scratch camera audio and they new audio track.

And as a note on the Mercury Playback Engine: the new NVIDIA Quadro 4000 for Mac is fully supported. I have one of the 4000 cards on loan from NVIDIA for testing and it’s performance seems just as good as the older Quadro 4800 card.

As usual with the Mercury Playback engine running under a good NVIDIA I was able to get multiple streams of native H.264 playback with quite a few accelerated effects. When testing before I got the best performance with playback resolution set to half but with this particular configuration of PPro 5.5, the NVIDIA Quadro 4000 for Mac and the H.264 file playing off an internal RAID I got full frame rates from full resolution.

Native RED R3Ds were a different story as they were very stuttery at full resolution but bumping it down to ¼ yielded good, smooth playback. I think that goes to show that native R3D playback isn’t for editing big jobs.

What they have done in 5.5 is update the RED R3D Source Settings dialog box with a lot more options: 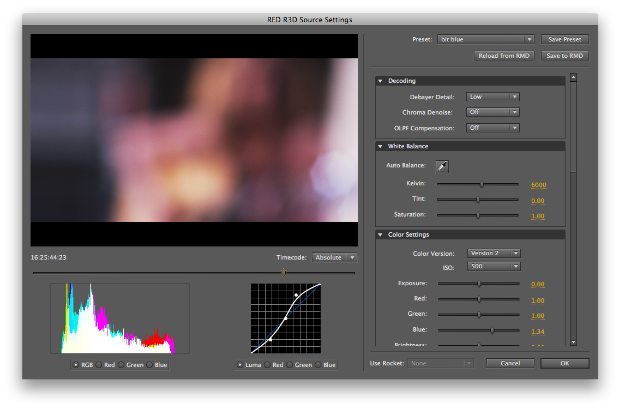 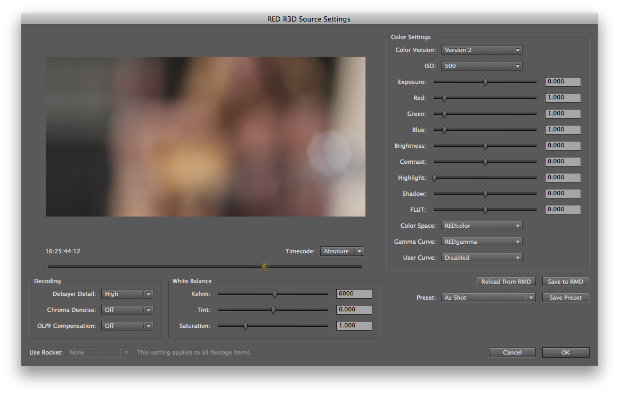 Another change that’s listed predominately in Adobe upgrade literature is an update to the Keyboard Shortcuts menu. This is one thing that was a long time coming as last year’s CS5 release still listed Avid Xpress Pro as one of the predefined keyboard shortcut options. Here’s the bullet list of points noted about the new keyboard shortcuts:

While any update to the old keyboard shortcuts menu was nice (the new keyboard shortcuts menu has moved to Premiere Pro > Keyboard Shortcuts… menu) the one big thing that’s still missing when it comes to changing the PPro keyboard layout is a top-down view of the keyboard. FCP has the best implementation of this that I’ve seen. It’s not just that everything is mappable to most anywhere but that it’s so easy to see what is mapped where and it’s just as easy to map the commands. 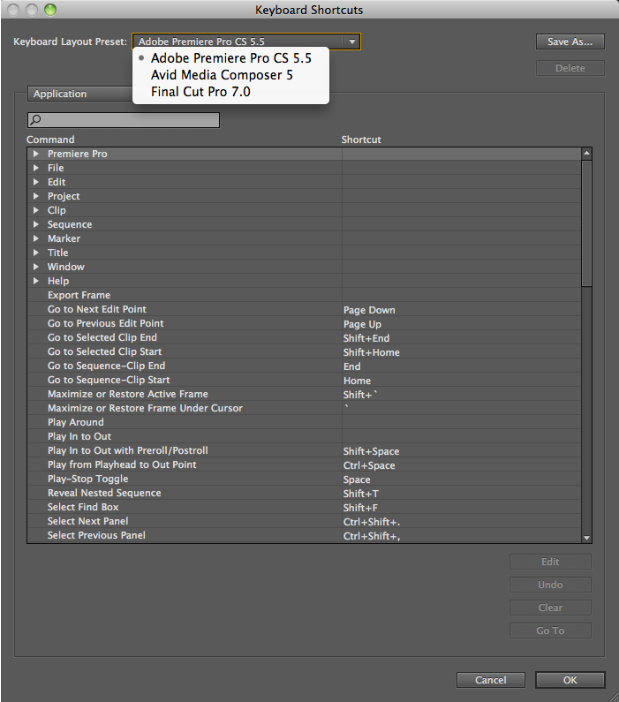 The new PPro 5.5 Keyboard Shortcuts menu. Notice the search bar that makes searching for particular commands much, much easier. 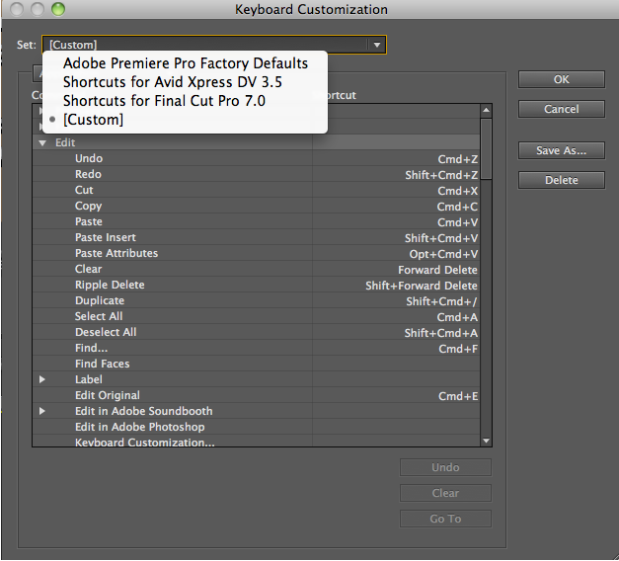 The old Keyboard Customization dialog box. It’s not that different from the new one.

Even with the revamped Keyboard Shortcuts menu you still have to do a lot of digging and twirling down of triangles to really see what keys are mapped where. Seeing that Adobe did do some changes in this version hopefully means they’ll continue revamping the Keyboard Shortcut menu.

There’s quite a few little things that have been changed as well. They now call an overwrite edit … wait for it … an OVERWRITE edit! It used to be called Overlay. This little bit of terminology standardization is good. It’s now easy to make a sequence from a clip by right + clicking on a clip and choosing … wait for it … New Sequence From Clip. Previously it was as easy as dragging a clip to the new sequence icon at the bottom of the bin. Now it’s even easier.

Next Up: A nod to the FCP editor and a rental model.

In yet another nod to the FCP editor, Adobe has added a little overlay in the Program monitor if you drag a clip to it: 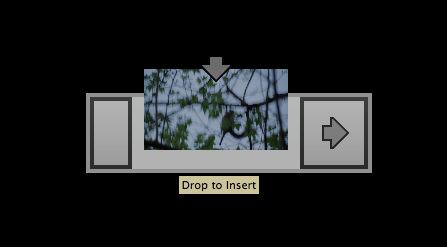 Adobe said in a conference call that I attended that in their research editors seemed to often drag clips into the Program monitor, ala FCP, and expected something to happen. I can see why they would add this editing overlay, they are trying to win editors from FCP. But really editors, if you’re still dragging clips from the bin or the viewing monitor over to the record monitor to perform an edit you’re wasting a LOT of time with this click and drag method. Learn the keyboard shortcuts (which Premiere has) or, at the very least, click the edit buttons at the bottom of the Source monitor. You’ll save a lot of time in the long run.

The other really interesting piece of news comes in the form of pricing for all of CS5.5. Adobe has introduced a rental model for all of the components, called the Adobe Creative Suite 5.5 Subscription Edition. Software rentals have been moving into fashion a bit as of late with a number of effects companies starting the trend (at least those were the first that I was aware of). I think that the rental model for the Creative Suite marks the first time a major vendor like Adobe will offer rentals on such large pieces of software.

It’s a very interesting idea. The PPro rental model is this: $39 a month for a 12 month commitment; $59 on a month to month basis. If you ask “why subscribe?” Adobe offers up these reasons:

Those certainly are some valid reasons. I don’t know if it makes financial sense for a single editor to do a yearly subscription to PPro as you’ve then paid out nearly $500 but a several month rental to really test the application does make a lot of sense. Plus it’s just one more option to get the software into editor’s hands. 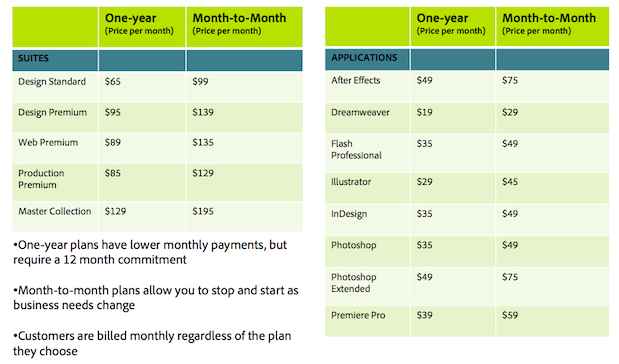 The most promising thing that I see in a rental model is that you could add a month of PPro for $59 to accommodate a freelancer on a big job or rent a month of Photoshop for $49 and After Effects for $75 to get that motion graphics job done instead of sending it out of house. And the full Production Premium can be rented for $129 a month.

The prices I quote are when they are rented on a month to month basis. There is a discount when purchasing a one-year plan as opposed to a month-to-month.

One thing that has not gotten any improvement in 5.5 is the options an editor has when faced with offline files. It’s exactly the same as it was in 5.0:

Premiere Pro desperately needs some type of automated search (at the very least) to seek out missing files. If they can’t go so far as to build in a database of some sort there needs to be a search option: ala Final Cut Pro. If you had a big job, scattered over multiple hard drives that wasn’t organized very well it could be a long, agonizing search to reconnect all the media. I hope that’s high on the priority list for 6.0.

I know it’s a small thing but I wish there was a way to toggle Audio Scrubbing without going into the Preferences menu. It’s not mappable to a key stroke but it should be. I turn scrubbing on and off all the time and it’s one of the simple things I miss while working in PPro. That and a quick way to change bin columns. Instead of it being a pop-up or contextual click you have to go under Metadata Display in the upper right drop-down menu of a bin: 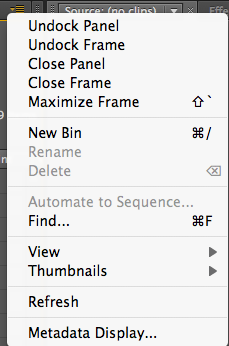 That’s quite a few mouse clicks for another thing I change all the time. But that’s just me.

There are a few more bells and whistles that have made its way into Premiere Pro CS5. Dig down into the official Adobe website for more details. Overall it’s a decent release to move from 5.0 to 5.5. I think there’s still some small things that PPro needs to address but they are still moving this product forward.

And I didn’t even get into its integration with the rest of the Creative Suite studio, especially After Effects. If you have the full Production Premium then imagine using Dynamic Linking to send a shaky shot over to AE to utilize the new Warp Stabilizer that’s part of this Creative Suite 5.5 update. That’s a powerful stabilization tool that’s now almost built-in to Premiere Pro.