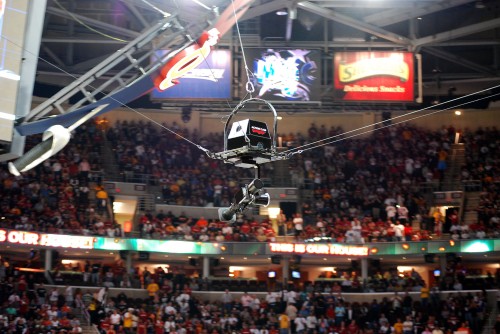 Tulsa, Okla.-based Actioncam used Fujinon lenses as part of its HD aerial camera system during the 2009 NBA Eastern Conference Finals. The system, which made its network debut during the NCAA Men’s Basketball Final Four tournament in April, is built around a Panasonic AK-HC1500 compact HD camera with a Fujinon HA13X4.5BERD wide angle lens.

The Fujinon lens enabled Actioncam to create powerful visuals during the NBA and NCAA games. “The extra wide Fujinon lens gave us a tremendous shot at the Final Four,” said PJ Bennett, Actioncam president and CEO. “At one point during a time out, we zoomed in close to the team gathered at the sideline to go over the next play. The camera was able to fly underneath the scoreboard and zoom in very close. As the time out ended, we pulled out to an extreme wide shot. The effect was dramatic and the network loved it.”

A team of two operators control the Actioncam system. The pilot uses joysticks to move the camera in space using a system of four cables. (A fifth cable secures the camera in the event a maneuvering cable snaps.) The camera operator adjusts the pan and tilt functions of the camera, and utilizes Fujinon’s DigiPower technology to zoom in and out and keep the shot in focus. Bennett said the precise positioning made possible by this technology is the reason Fujinon lenses were chosen for the system, as it allows the Actioncam system to provide shots previously unavailable from an aerial camera.

“The DigiPower interface found on the Fujinon lens sets our system apart from other aerial systems. Not only can we move the camera in multiple directions, but we always know where the system is in 3D space within less than an inch,” he added. “This data, how far we’re zoomed in, and where our focus is set lets us provide a precise focal point to support features like the first-and-10 line for football.”

Fujinon is a major manufacturer and distributor of optics and lens assemblies for the broadcast, digital cinema and industrial markets. The company’s line of television zoom lenses are used in virtually every segment of the broadcast industry, including electronic newsgathering, studio and field production, and high definition television. For more information about Fujinon broadcast and communications products, call (973) 633-5600 or visit our web site at www.fujinonbroadcast.com.