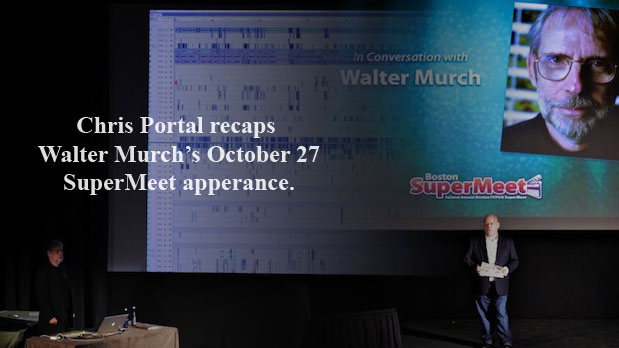 I wasn’t able to make it to the October 27 Boston SuperMeet though I really, really wanted to go. With a lineup that included the editor of Apocalypse Now and The English Patient, that would be Walter Murch of course, as well as Andrew Weisblum, editor of Black Swan and The Wrestler this looked to be a craft-focused event. Of course everyone wanted to know what Murch thinks of Final Cut Pro X and thanks to Chris Portal’s report from the event we now know.

Murch on the craft of editing.

I won’t repost Chris’ whole post here as you should click over and read the whole thing. What looked to be really cool about Murch’s talk is that he focused on the craft of editing and his techniques on how he works. He specifically took attendees into a current Final Cut Pro 7 timeline on his latest project. While we all have our own ways of working I always enjoy seeing how other editors tackle projects like this. Chris’ blog posts includes quite a few photos from the event including some of Murch’s timeline.

And as anticipated, Murch did comment on Final Cut Pro X. Again, read the blog post in its entirety for all the details but it probably comes as no shock that Murch isn’t enamored with FCPX. The best quote is this:

While Walter is encouraged by the updated FCPX version last month, he hasn’t used it on any real work yet, so he is cautiously optimistic (and still traumatized he says). “Do they love us? No…I know they like us….but they keep saying they love us??”

I won’t take that statement that he “hasn’t used it on any real work yet” to mean that Murch hasn’t thoroughly kicked the tires on FCPX. Give his book Behind the Seen: How Walter Murch Edited Cold Mountain using Apple’s Final Cut Pro a read and you’ll see he’s not scared of new and different technology.

Thanks to Chris Portal for posting photos and a summary of Murch’s talk at the SuperMeet. He’s on Twitter if you want to follow him. The event didn’t live stream but I hope there will be archives up soon so we can all watch the event in its entirety including demos of DaVinci Resolve, Autodesk Smoke and the new Canon 1D. Keep an eye on the SuperMeet page.

If you search #supermeet via Twitter you’ll also find some other good comments from Murch on FCPX:

From @dave_powers: Gave a “yellow flashing light” verdict on FCP X, and “not sure” what he’d use next project.

From @ItsMeMegatron: This may have been the last time I use Final Cut on a film. (referring to his current film I’m guessing).

And here’s a good one from @bomoarts with a picture about Murch’s workstation where he edits standing up.