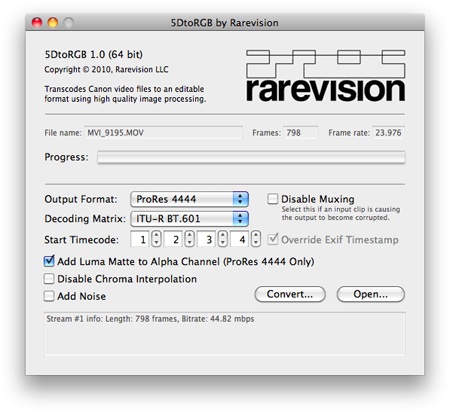 There’s a new transcoding tool making the rounds on that newfangled Twitter thingy the kids are using these days, it’s called Rarevision 5DtoRGB. It’s a free app for Mac users that they claim offers a much higher quality conversion from H.264 DSLR raw footage to an editing codec (ProRes is a common choice, in one of several flavors and bitrates). Two blogs have done some comparison testing between this new tool and MPEG Streamclip (another popular free option), and I wanted to point them out here for your pixel-peeping enjoyment…

16×9 Cinema has a comparison in which they show a visible quality increase using the Rarevision tool, at the expense of conversion time. To be fair, Rarevision makes no bones about their tool being slower…it is clearly aimed at users who want to eke the highest quality out of their footage and don’t mind the increase in transcode times. Which are not insignificant….Robin Schmidt has a comparison blog post up, and says conversions are about 8x slower (that is, MPEG Streamclip does the job in about 12% of the time that Rarevision’s 5DtoRGB tool takes to transcode the same footage).

Robin goes on to rave: “…the 5DtoRGB is stunning. I can’t really explain how fantastic the transcode is. But believe me, it’s phenomenal.” And provides zoomed in screencaps to illustrate the difference. The quality difference is clear to see in these examples, and I, for one, am ready to give this new tool a shot on my next project. Most interesting to me is the improvement in jaggies and moire that is evident in Robin’s screencaps. However, given that MPEG Streamclip can transcode in essentially realtime, Rarevision’s tool is not something I could use on every project. There will always be a need to balance speed vs quality, so I’m happy to see that new tools are emerging to cater to both sides of that equation.

You can check out Rarevision’s 5DtoRGB tool here and MPEG Streamclip is available here. Of course if you are a Premiere Pro user, you might not want to worry about transcoding, as it appears to handle native H.264 file editing rather nicely. But for the rest of us FCP flunkies, these tools are an invaluable addition to the Applications folder. Check ’em out and report in the comments below.

UPDATE: here’s a link to a H.264 vs Streamclip vs EOS Log & Transfer vs Rarevision 5DtoRGB comparison on the Cinema5D boards. In this comparison, the differences appear very minor, though there seems to be less artifacting when using the Rarevision tool. It also seems to noticeably lift the mids, in addition to the typical Quicktime gamma wonkiness that ensues when using various tools.

Another UPDATE: Jerome Stern has written extensively about how Rarevision affects Quicktime gamma and color accuracy.