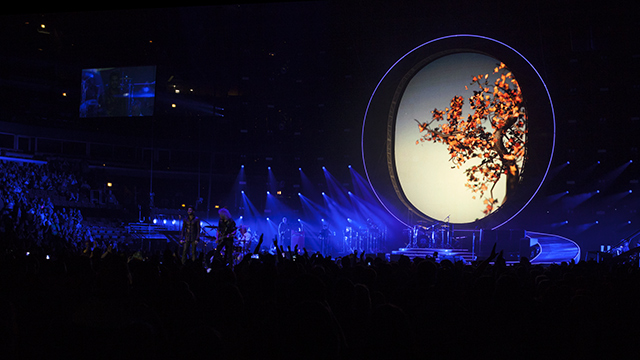 Adobe: How did you get started in live event production?
Dew: Both Jack and I come from theater backgrounds. Jack worked with video, while I spent years working as a lighting designer. One thing we both noticed was that over the years, these two positions were starting to merge. Video people were concerned about how stage lighting would interact with their displays, and lighting people were using video to fine-tune lighting controls. We decided that we could turn our expertise into a business beyond the theater stage.

Adobe: What draws you to this type of digital production?
James: We’ve worked on runway shows at London Fashion Week, major movie premieres such as Twilight and The Avengers, and live performances for Justin Beiber, Rihanna, and the Pet Shop Boys. One of the reasons that we excel at our jobs is that we understand our clients’ requirements from both a technical and artistic angle. Video and lighting are the tools that we use to tell a story, whether we’re punctuating music with visual drama or focusing the attention with subtle lighting. It’s all about supporting the emotional journey.

Adobe: How did you get involved with Queen + Adam Lambert tour?
Dew: We were contacted by LD extraordinaire Rob Sinclair who I have known for a number of years and we have worked with before. Rob invited us to pitch for the work, which we were delighted to be awarded. The tour set included a large LED display and we worked closely with the team on the lighting displays, video, and content creation. 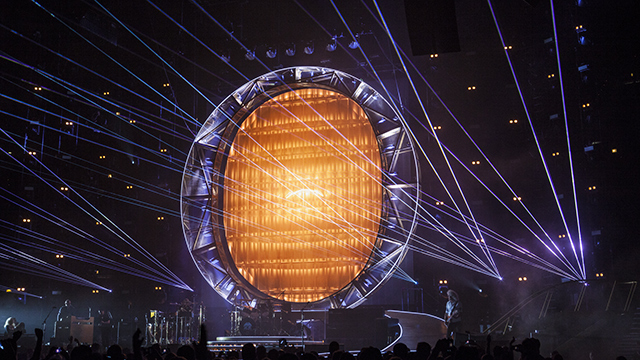 Adobe: How did Adobe Creative Cloud contribute to the project?
Dew: Adobe applications are essential to our creative process. We depend on Adobe throughout our workflow because it truly provides the best creative software out there. For Queen, the workflow generally started with After Effects, which we used to prototype the show. It may seem like an odd choice for prototyping, but with After Effects, we can quickly layer and rearrange elements from Illustrator or Photoshop and use the timeline to demonstrate how a show might evolve.

Adobe Premiere Pro was particularly important for the Queen tour because we were using a significant amount of archival content. We used clips from TV performances and live gigs to create the illusion that Freddie Mercury was back on stage with the band. Some of the content was decades old and stored on film or tape, but because Premiere Pro supports all types of media formats, we just loaded the footage and started working right away.

James: We worked very closely with Queen, going to rehearsals and working until opening night to get the show exactly how everyone wanted it. That meant traveling back and forth between London and the United States. Previously, we would physically carry our hard drive wherever we traveled and reinstall it onto the local rig, which was always quite a hassle. Having Creative Cloud meant that we could log in from different computers and immediately gain access to the same software, settings, and files that we were working on in London. 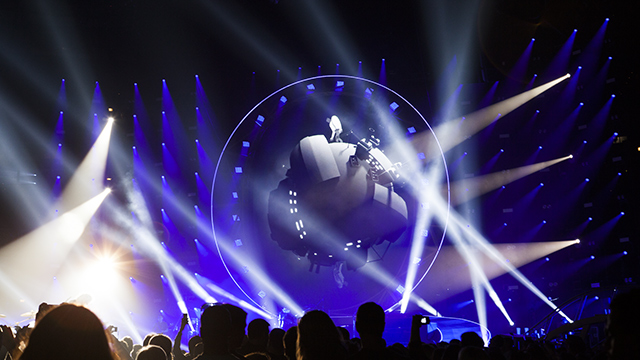 Adobe: What is the advantage of the Adobe Creative Cloud for teams?
Dew: Rather than working with full-time employees, we concentrate on building relationships with some of the best freelancers around. With each project, we choose the best team for the job based on their expertise and skillsets. Creative Cloud for teams makes it easy for us to manage licenses and assign seats to freelancers for short-term projects. Everyone works on the same versions of software, so we don’t have to worry about incompatibility issues. We can also share settings and templates with all of the team members to help ensure that the final product meets our requirements.

Adobe: What other features of Creative Cloud stand out?
James: Much like how we use freelancers to make our company more flexible, Adobe’s excellent support for third-party integrations gives us more creative flexibility. Our animators use the integration between Cinema 4D and After Effects CC constantly to develop incredible 3D animations. We also make significant use of Trapcode, Boris Continuum, and Element 3D. The number of great plug-ins available for Adobe applications help us push our limits creatively.

Adobe: What’s next for Really Creative Media?
Dew: We have several corporate jobs and fashion work in the pipeline, but we think that the next creative change for us will be more work with 4k resolutions. It’s the next step in visual expression and it will help us create sharper, even more impactful videos for clients.