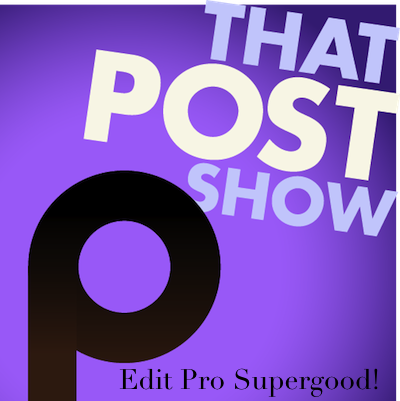 Just over a week ago I enjoyed sitting in on another episode of That Post Show where we had a calm and rational (mostly) discussion of Avid Media Composer 6 and Apple Final Cut Pro X. While it might seem these two NLEs are rather far apart in their perception and target market they are indeed both non-linear editors that can be used to tell a story as well as the two newest NLEs on the block. The show is called Edit Pro Supergood and it’s a long one, clocking in at a bit over two hours.

Guests on the show were myself, Paul del Vecchio, Steve Cohen and show creator and host Kanen Flowers. It was a very good discussion (I think) and it was pretty evenhanded. As much criticism as FCPX has taken there are some great things about it and Steve even had a list of FCPX things he would like to see implemented in Media Composer. This should be a good listen no matter which side of the NLE fence you come down on.

Click over to the That Post Show website for full bios of the panelists as well as show notes and links. You can also subscribe to the podcast in iTunes (and a rating would be appreciated). As far as podcasts go I’ve been using the great iOS podcast-catching app Downcast recently (iTunes link). It’s $2 but 2 really good dollars spent as it’s easy to search and use and it means you don’t have to go through the pain of opening iTunes just to update podcasts. It also has a really cool, user definable, rewind and fast-forward operation that works just by swiping the screen.