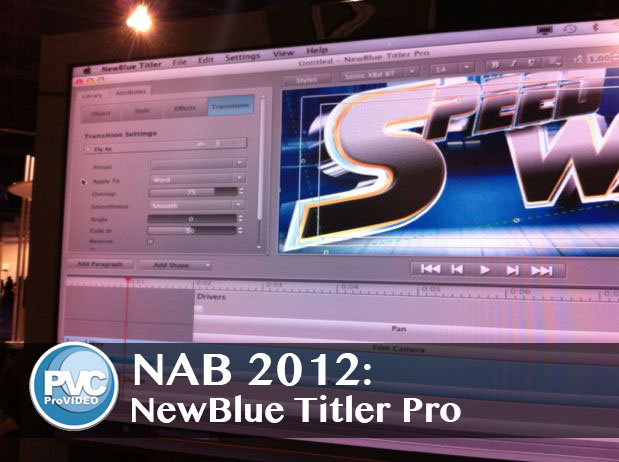 NewBlue, Inc. is a software developer that had a booth in the South Hall’s plug-in pavilion. They were showing their NewBlue Titler, a dedicated title creation and animation tool that resides in most all the major NLEs. It has a clean, simple interface that didn’t look like it breaks any new ground as far as design goes but that may be okay if you’ve got the need to create and animate your titles in a hurry … which many of us do.

NewBlue Titler Pro was being demonstrated in Adobe Premiere Pro. Its compatability with Mac was one of the company’s announcements at the NAB show. It installs as a new menu item under PPro’s New submenu. It’ll be a generator in Final Cut Pro 7 and X and presumably an effect in Avid Media Composer’s Effect Palette.

After launching NewBlue Titler Pro you’ll be presented with an interface that includes all the usual suspects when it comes to creating titles: font choices, styles, sizes, attributes, all the things you’d expect in a titling tool. The left side is for tweaking any number of attributes, the right is a viewer and there’s a timeline at the bottom. 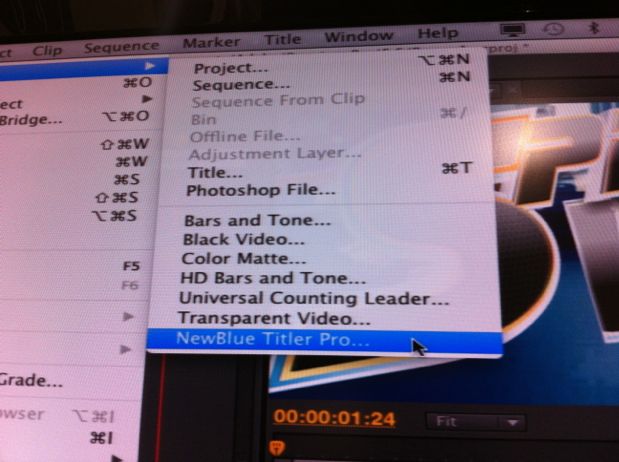 Here’s Titler Pro being launched from within Premiere Pro.

The presence of a timeline means animation! NewBlue Titler Pro is much more than just for static titles so animation can take place right in the Titler Pro interface. I mentioned before that the Titler Pro interface doesn’t break any new ground but that’s probably okay as an editor will feel right at home in NewBlue Titler Pro. It feels much more advanced than something like Boris Graffiti, that we used for so long in Final Cut Pro, but not near as complex and confusing as Avid’s Marquee. There’s a lot of presets as well and if you read over the feature list you’ll see that there’s a lot to this $299 tool. All the animation presets are fully customizable as well. 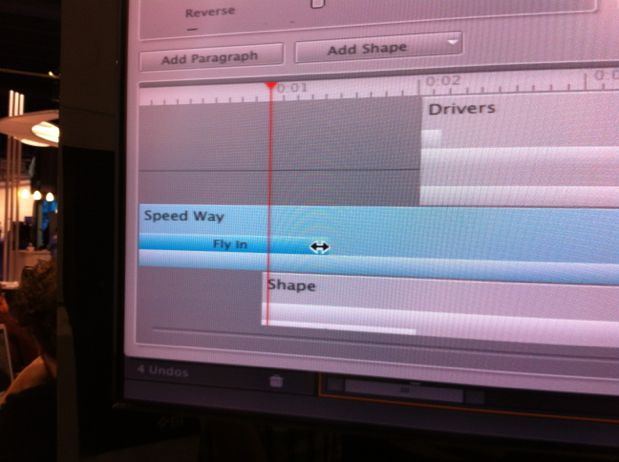 The Titler Pro timeline looks pretty simple to use for creating and tweaking title animations.

I have to admit I’m most looking forward to this type tool in Avid Media Composer. Avid’s built-in title is old and, how should I put this … crappy. Marquee is incredibly powerful but like learning a brand new After Effects. Titler Pro looks easy to learn with a lot of powerful features.

NewBlue Titler Pro has been available for Windows NLEs for a while but it’s new coming to the Mac platform (it should be out by the end of the month). On the Mac it’ll be supported in Premiere Pro, Avid Media Composer and Final Cut Pro 7 and X. Add that to all the Windows NLEs it supports and this may be one of the most widely supported title tools in all of editing! 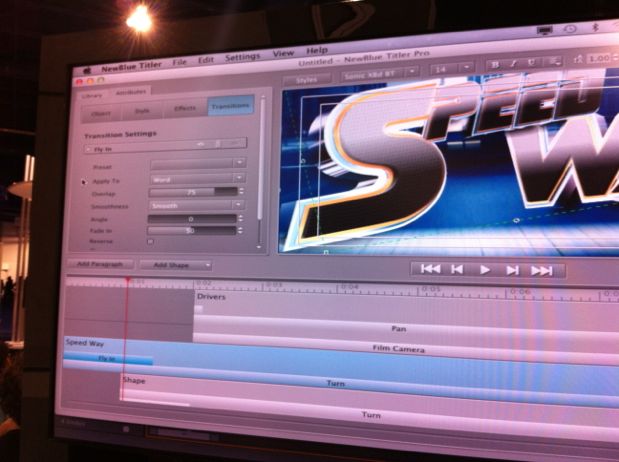 As you can see the interface is clean and simple. Just what the doctor ordered for fast title creation.

Check out this 12 minute demo on NewBlue Titler Pro for a good tutorial of how it works: