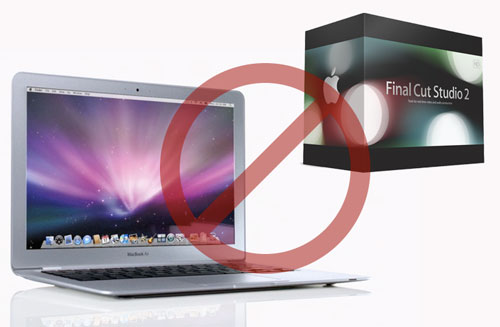 Apple’s much hyped MacBook Air that Steve Jobs rolled out to much fanfare has started shipping in the last few days.

The specs are surprisingly decent for an ultralight laptop – 13.3″ wide aspect 1280×800 screen, full size LED backlit keyboard, a Core 2 Duo processor, 2GB of RAM stock, a slick solid state drive, Bluetooth and WiFi, and Apple’s first implementation of a multi-touch interface on a device other than an iPhone.

At only 3 pounds, it sounds at first like the perfect machine to do some offline editing in the field with, or capture some footage with and start editing back at the hotel, etc. It has a Core 2 Duo processor, already has 2GB of RAM out of the box, so why not? At $1800, it isn’t cheap, but it costs less than a MacBook Pro, so even moreso why not?

In almost every category, the Macbook Air is not a suitable machine for video editorial work.

Lets break it down, one category at a time:

Processor:
First off, that Core 2 Duo processor in the Macbook Air is slower than even the regular Macbook – the base model is only 1.6GHz, and the higher end model caps out at 1.8GHz. While that is faster than some of the G5s shipped a few years ago, and plenty fast enough to cut most formats, that is still pretty poky these days. Even a $1100 MacBook has a 2.0 GHz processor, for $600 less.

RAM:
The default RAM config is 2GB – not bad, and technically enough to edit HD with according to the minimum specs from Apple. But wait…that is your ONLY option – you can’t add any more. 4GB is my usual dead minimum recommendation to work with HD footage.

Hard drive/storage options:
In order to get the size, weight, and thickness down, Apple made the unusual move of opting for a 1.8″ diameter hard disk, rather than the usual laptop standard 2.5″ mechanisms. This means that it is limited to smaller capacity drives – the standard drive is 80GB, which formats to about 74GB. If you were to install the full Final Cut Studio 2 suite, you’d have installed 55GB of goodies, leaving you with precious little room for music, files, and – oh yeah! – those oh-so-very disk hungry video files. Of course, as with most laptop installs, you can opt out of a ton of the media libraries and cut that down to just a few GB, but you get the idea. In any case, since DV & HDV run about 12+ GB/hour, even if you could get the footage on there, you couldn’t hold very much. What about that solid state hard drive? With effectively zero seek times, multiple simultaneous tracks should be easy – if you had the horsepower to push them, which you don’t have much to spare. The SSD is only 64GB, so even more of a space problem – with the OS, the standard apps, and a full FCS2 install might not even all fit on that drive!

And did I mention that the SSD costs an EXTRA $1000? Yowza. I like the idea of fast booting, no head crashes, lower power consumption and better data safety…but at a nearly 60% increase of the unit? Feh.

GPU:
This is a serious limitation as well – the built in graphics on this unit means Motion, and especially Color, won’t run worth a flip, and certain functions in Final Cut Pro, such as GPU accelerated plugins and the Desktop Digital Cinema Preview won’t work at all. But for some simple editing, this is survivable – I run FCP (but not Motion or Color) on my MacBook just fine within limitations, even though it isn’t officially supported.

Optical Drive Not Included:
For $99 more, you can get an external SuperDrive, as the Macbook Air doesn’t come with an internal optical drive. It does come with software to let you “guest” off of somebody else’s optical drive, but even that has multiple known limitations.

FireWire?
No FireWire, anywhere. This means that you can’t connect a FireWire drive for additional storage beyond the measly 64 or 80GB internal drive’s capacity. For editing, more importantly, that means you can’t capture footage over FireWire from formats such as DV, HDV, DVCPRO HD, etc. Ooooooops. That’s an editorial deal killer right there.

USB 2.0:
But you could attach a USB 2.0 drive for additional storage, right? Well…you’ve got exactly one USB 2.0 port on this computer. And you might want to use that for other things, like an Ethernet port, or the optical drive, or other stuff. You could of course use a USB 2.0 hub, but that’d be yet another piece of gear to carry. Even with a hub, Macs have infamously woeful USB 2.0 transfer speeds – 12-16 MB/sec. Compare that to the 80+ you can get from native SATA connections, or the 50-80 MB/sec from FireWire800, and you see how poky that is in comparison. 12-16 MB/sec is fast enough only for the most heavily compressed formats. Want to do a cross dissolve? Don’t forget that doubles the throughput requirements as well. Bust.

Expansion?
Powerbooks had the older slot that gave them P2 compatibility. MacBook Pros have the newer slot, compatible with the newer SxS cards used with Sony’s very promising XDCAM EX camera, the EX1. This Mac has neither option – again, no way to import footage.

Battery. Stop. Singular. FULL Stop.
While Apple claims five or more hours of battery life, real world editorial work burns through batteries MUCH faster than optimized marketing specs would imply. The battery life is quite good, BUT….it is a fixed battery – the Macbook Air isn’t built to pop out/off an interchangeable battery and put a new one on whilst on the go. You MUST plug into a wall to recharge – and that defeats half the usefulness of a laptop in my eyes. And for a lot of field production, or taking notes at an all day conference (something I do often), that is an absolute deal killer right there. I’m taking 3 batteries with me on an international flight tomorrow – if I had an Air, I’d be stuck after the first few hours with (shudder) only analog entertainment possible….no good.

Ethernet?
None built in, but once again you can use your one and only USB 2.0 port to connect an adaptor…which you have to buy extra. Come on, Apple. Lame.

3G Connectivity:
In other snubbing news, even the thinnest of the current crop of USB 3G modems won’t fit in the MacBook Air – see Engadget for details.

Video Out:
At least they DO support driving a second monitor – kudos. This means it IS viable for doing presentations on the road. Kudos to Apple. IF the GPU were Quartz Extreme capable, you could drive the second monitor full screen for video. But it isn’t, so you can’t. Back to “Blech.” status on this one for our editorial purposes (but you COULD have bins etc on a second screen….)

Lust Factor
I’m usually one to have that savage itch when Steve smiles, waves a finger, and says “One more thing….”. Since I’m sitting in a house with 2 G4s, 3 G5s, a Mac Pro, the MacBook I’m writing on, 3 different iPods AND an iPhone, you can guess at my willpower on resisting the RDF (did I mention I live alone? Maybe there’s a correlation…but that’s another website entirely!). Granted, I’m a edge case power user, but still…my overall reaction to this Mac is “Feh.” *

In Conclusion
So why, if there are so many things wrong with this machine for the purposes that I’d (and presumably, many of you) would like to use it for, am I beating up on this machine that I’m making out to be a red headed stepchild? Partially because somebody asked, and I took a deep breath….that wasn’t deep enough. And also because it helps to illuminate all the factors that go into what DOES constitute a viable editorial machine – each of these factors is important and shouldn’t be overlooked. Apple’s default machine configs are rarely appropriate to our needs – I pretty much always am getting a Build To Order when I get a new system for myself, or am making recommendations for a client.

My historical resistance to the Reality Distortion Field right after MacWorld is usually about as strong as a junkie’s in a coca field. But not this time. With too few benefits and too high a price for what I’d be willing to pay, I’m going to sit this one out. Without even scratching at my forearms unconciously, or even sweating profusely late at night.

As much as I hate to say it (and the nose drive from Apple’s stock value from 200 to 130 ** in the last few weeks attests as well), I think Apple has delivered the Cube 2.0 – small and elegant, but underpowered, underexpandable, overpriced, and not very broad market appeal.

With at least FireWire400, a dedicated Ethernet port, and a replaceable battery, I could live with it – but it lacks all of these, so No Can Do. Add a 2.5″ drive mechanism, audio in port (yep lacks that too), and a 2.2 GHz processor, it’d be an excellent successor to my MacBook. Speaking of Do Not Want – check out the price to get all the technical marvels. To get what I’d want – a 1.8 GHz model with the solid state drive, SuperDrive, AppleCare, Ethernet adaptor, and the Apple Remote (NOT included!) – it will set you back just under $3500. OUCH.

There will be well heeled road warriors who will adore this machine, and it’ll be great for them – but I’m not one of them, and you probably aren’t either. To be fair, this machine was absolutely not designed for the demands of video editing – it is intended for a different audience, who may receive it more warmly than I. But…

In the end, for our video purposes, it is what they call it – just a bunch of Air – and not much at that.

For more information, Engadget has an excellent selection of detailed articles about the MacBook Air. That is, until PVC ramps up to full speed and I’m back from vacation. 😉

* Now, if my girlfriend needed a new machine, she who doesn’t do video, doesn’t do iTunes, and doesn’t take a ton of pictures…IF she decided to spend that much money, an Air would be PERFECT for her needs – lightweight,stylish, WiFi only for connectivity, a web box and photo sifter only. It is all horses for courses, my friends…