One of the most interesting genres of fantasy storytelling is steampunk, generally with characters set in the Victorian era when the world was powered by steam and enlivened by inventiveness in science and costumery.

If you're one of the genre's many fans, you should check out Lisa Walker England's Aurelia: Edge of Darkness, a steampunk-fantasy interactive web drama officially debuting online today on Theatrics.com. Inspired by her illustrated steampunk-fantasy serial Rise of the Tiger, the show invites anyone to create and develop a character to help tell the story of the doomed city of Aurelia.  With a run scheduled for 12 weeks, fans will create characters — citizens of the city — using Theatrics’ collaborative video communication platform. Their video and other content posts will drive the ongoing story.

Walker, who works by day as a digital marketer, has assembled a team of illustrators, performers, and supporters from her home base in Milwaukee. Many of her collaborators are afficianados of the live-action role-playing communities in the region, and have already begun to perform in character on the Aurelia site.

She has also created a blog in order to share the backstage evolution of the project and the community which will help the story unfold, here. 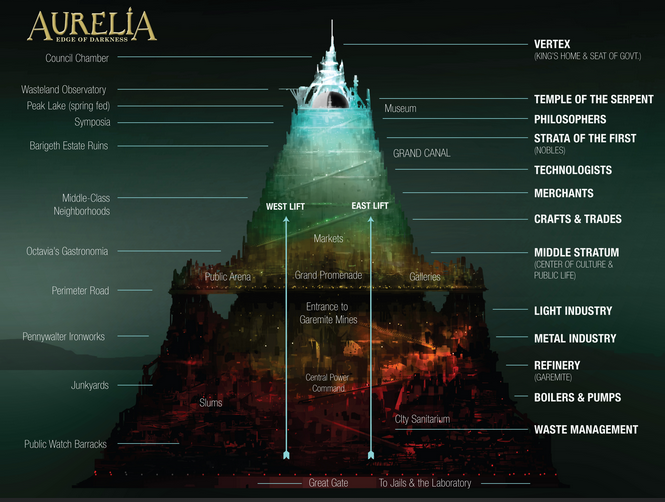 Map of AURELIA, one of many back-story items to discover on the new show site.

Aurelia: Edge of Darkness follows the citizens of a self-sustaining, steam-powered city as they battle a deadly energy crisis.  Each week, fans will receive new calls to action that invite them to react to plot twists and tell the story from their character’s unique point of view.  Fans are also encouraged to post photos of the costumes, sets and props they are developing for their character to Facebook and Twitter with the hashtags #aurelia, #aureliaspoilers or #aureliaprops.

The story of Aurelia: Edge of Darkness begins after the once-utopian plains of Aurelia were transformed into a cold, uninhabitable wasteland, fit only for monsters and the almost dead. The citizens have been forced to flee to a central mountain where they have built a fortress and named it Aurelia after their lost home.  Inside its walls, their civilization has flourished through scientific inventions and the power of steam, but now, Aurelia faces a serious energy shortage. If the city’s boilers fall silent, another paradise will fade into Darkness.  As fans take on the personas of Aurelia’s citizens, they must overcome political intrigue, social unrest, and strange magical happenings to find a new source of power… before the lights go out, forever.