Avner Ronen, CEO & co-founder of Boxee, Inc., will speak at the upcoming 2013 NAB Show, the annual conference and expo for professionals who create, manage and distribute entertainment across all platforms. Ronen will deliver the keynote address to the Disruptive Media Conference on Wednesday, April 10, 1:45 – 2:15 p.m. in Las Vegas. 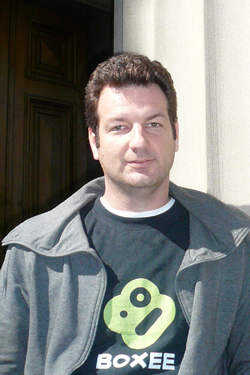 The idea for Boxee was born in 2004 when Ronen and four friends began using Xbox Media Center, open source software for the original Xbox that allowed people to play digital media on their TVs. They became members of XBMC’s open source community and in 2007 imagined a way to take the platform even further, founding Boxee.

Ronen and a team of 11 others worked to extend the base code for XBMC with online sources like Netflix and YouTube as well as incorporate social networking into Boxee, which became available as free software for users to download and run on a home theater PC. Since then, Boxee has released two branded consumer electronic devices dedicated to running the Boxee software. Currently, with Boxee’s newest device, Boxee TV, the company has introduced the world’s first unlimited cloud DVR, blending live TV integration with over-the-top streaming services.

Named one of Rolling Stone’s Top Agents of Change, Ronen is “the Internet generation's everyman,” according to Boxee, striving to make personalized, Internet-delivered TV a reality and bringing video from everywhere, to any device, at any time. Under Ronen, Boxee has won numerous awards each year since its founding, including the 2008 Consumer Electronics Association's Innovation award, G4’s Best of the Best products of CES in 2009 and 2010’s Last Gadget Standing.

Prior to co-founding Boxee, Ronen was the head of Corporate Development and M&A for Comverse, Inc., a leading provider of software and service to telecom service providers. Ronen was responsible for acquisitions valued at $450 million, which were key to the company's evolution from a voicemail company to a billing and VAS provider.

Ronen joined Comverse in 2002 when they acquired Odigo, a company he co-founded in 1998. Odigo was one of the early instant messaging services on the web, serving more than 8 million users worldwide and earning Ronen the 2002 honor of being a member of Crain's 40 Under 40. His fascination in harnessing the Internet to make peoples’ lives better started when Ronen served 4.5 years in the Israeli Defense Force in the special computer unit, MAMRAM.

The Disruptive Media Conference, produced in partnership with Digital Media Wire, gathers professionals who oversee the digital and interactive divisions within their companies to explore developments in online video, mobile and branded entertainment. The two half-day programs, April 10-11, cover disruptive media as well as more traditional OTT technologies and how these are impacting business models for distribution and consumer engagement. The conference is sponsored by Adobe Primetime, Cypress and Telx.