Justin Weyers faced a challenge: help create an animated movie that integrates the work of 14 animation studios into a holistic 3D stereographic film, to celebrate the life and multifaceted career of deceased Monty Python member Graham Chapman. Weyers is co-founder and director for multi-disciplinary creative agency Made Visual Studio. Switching to an all Adobe workflow based on Adobe Creative Suite Production Premium provided the tools needed to weave the creative visions and talents of many contributors into a film that mirrors Chapman's genius. Recently, Weyers talked with Adobe about the project, the switch to Adobe Premiere Pro, and his experiences using the latest versions of Adobe Creative Suite Production Premium, including Adobe Premiere Pro, After Effects, Flash Professional, and Photoshop Extended.{C}

Adobe: What prompted the creation of this tribute to Graham Chapman?

Weyers: Graham Chapman was one of the founding members of Monty Python. He died in 1989, but he left behind a body of much-loved work. He was a doctor, a comedian, a prolific writer, and a zany actor. He was openly alcoholic, homosexual-and famously a very naughty boy. He had previously written an absurdist memoir, A Liar's Autobiography: Volume VI. He never made clear which parts were true, and which were fictional. Chapman recorded himself reading this book before he died of cancer and this is where our film started.

Adobe: The book was recorded, but where did the idea for an animated film come from?

Weyers: The audio tapes were just of Graham's voice, and funny as they were, three hours was a long time to listen to one man. His extraordinary life was far more colorful than that and everyone realized the opportunity was much bigger. Terry Jones' son Bill Jones, along with Ben Timlett and Jeff Simpson, the film's directors, decided to embark on a grander vision. With the blessing of Graham's partner David Sherlock, everyone decided to bring Chapman's voice back to life in the most absurd and original way. Additional characters in Graham's life were voiced by reuniting the other Monty Python members-John Cleese, Terry Jones, Terry Gilliam, and Michael Palin playing themselves but also a variety of outrageous personalities only the Python's could bring to life. Resulting is a fitting tribute taking us back to days of the original Python collaboration records, which will sadly never be heard again because of Chapman's passing. The final film titled A Liar's Autobiography-The Untrue Story of Monty Python's Graham Chapman is targeted for release in the U.S.by EPIX and Brainstorm Media in fall of this year and in the UK by Trinity films in early 2013. The film is produced by Bill and Ben Productions. 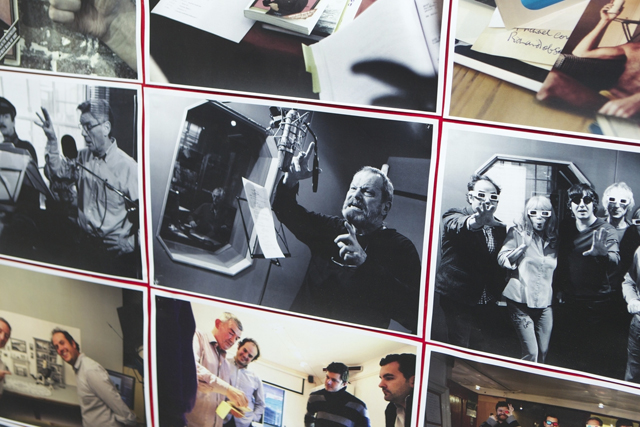 Adobe: How did you become involved?

Weyers: Made Visual Studios was tasked with the job of bringing an animated Graham Chapman back from the dead (although not really, of course). The idea was that 14 animation companies, including Made Visual, would each do a section of the film in their respective styles, and learn how to bring their work into the modern world with stereoscopic 3D. My job was to find/manage/teach all of the animation companies and make sure in the end their styles worked in stereo and their contributions would meld together. Stereoscopic 3D has been taking over in the last couple of years, and going to the cinema and seeing something without glasses feels weird to me at the moment. I started obviously with Avatar and then watched every 3D film that has come out, from Pixar's animation releases to the amazing Pina Bausch film.

Adobe: What were some of the biggest challenges?

Weyers: The project was very ambitious on several levels. There are actually 17 different animated styles, created by 14 companies, none of them with S3D (Stereoscopic 3D) experience. Some started with cell animation or line-drawn art. There is stop-frame, 100% CGI, and even oil and glass. Name an animation technique-it was used. This had never been done before so why not have a go, I thought (he takes a deep breath). And remember that at the beginning our only real form of knowledge was through trawling the web and seeing what techniques we could find and resources we could use. 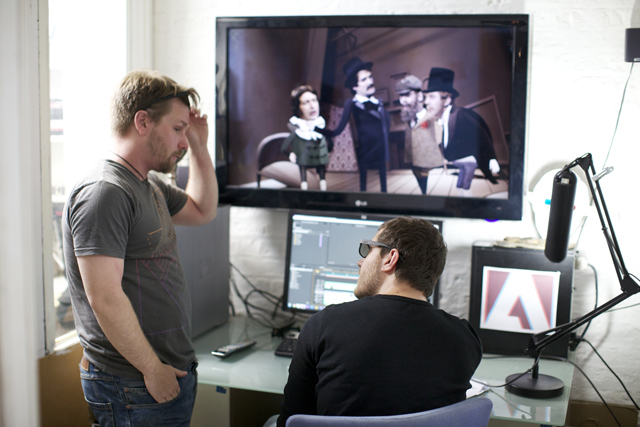 Adobe: What was the key to combining the work of all these different animators?

Weyers: All of the animation houses were equipped with Adobe Creative Suite Production Premium. Having a common toolset from the start made it possible to create a standard workflow and guidelines for all the creative contributors involved. An open communication between everyone was essential. We did all the compositing in Adobe After Effects and edited everything together in Adobe Premiere Pro. We streamlined creation of right-eye and left-eye comps making use of the 3D glasses in After Effects and writing a script by Paul Tuersley, which allowed switching eyes through multiple comps producing a smoother workflow. Also, Dynamic Link was huge, because it helped us make changes among the Adobe programs while avoiding constant, time- consuming re-rendering. 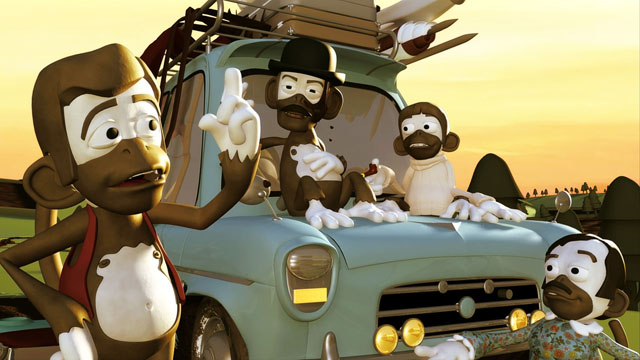 Adobe: Bill and Ben Productions and Made Visual Studio recently switched from Final Cut Pro to an all Adobe workflow, including Adobe Premiere Pro. What were the main reasons?

Weyers: The producers of the film, Bill and Ben Productions, used Final Cut Pro until this project and at Made Visual Studio we've used Final Cut Pro and Adobe Premiere Pro for years. But now, it's all Adobe Premiere Pro because it fits into our workflow perfectly due to Dynamic Link and the speed at which we are able to make changes. It brings down render times enormously and is very versatile when having to bring in different codecs and image sequences. The flexibility of jumping between After Effects and Adobe Premiere Pro especially with a stereoscopic workflow for animating, rendering, and final output is something that could not have been in done using Final Cut Pro. The programs all talk to each other and are from the same family. Keeping projects smooth and seamless benefits everyone involved.

I've been telling everyone they need to swap over and they're downloading the free trial, witnessing the speed and ease, and are surprised they didn't try it earlier.

Adobe: How easy was it to switch to Adobe Premiere Pro?

Weyers: Each project for us takes on new creative workflows and Adobe Premiere Pro has the most flexibility in adapting to this constant change. I'm not just referring to live action and green screen footage, either. We are all constantly trying new techniques and finding new ways to visualise ideas. I'm not sure I'd call it switching as it becomes a necessity, working closely with After Effects and the other CS Production Premium components in a smooth contained professional output is what we are all after. Taking content into another program slows down the process and is only going to give you more issues to deal with.

Adobe: We understand you also moved over to After Effects CS6 and Adobe Premiere Pro CS6 during production. What are your impressions?

Weyers: The Global Performance Cache in After Effects CS6 is great because it lets us playback sequences in real time, making our workflow so much faster. The Mercury Playback engine enabled the playback of large 8MB image sequence files with ease; we needed it as we would be managing 700,000 DPX files in the end. Overall, the performance of both After Effects CS6 and Adobe Premiere Pro CS6 is faster and smoother, making our workflow and the dynamic linking between the programs very efficient. We're looking forward to other enhancements as well. 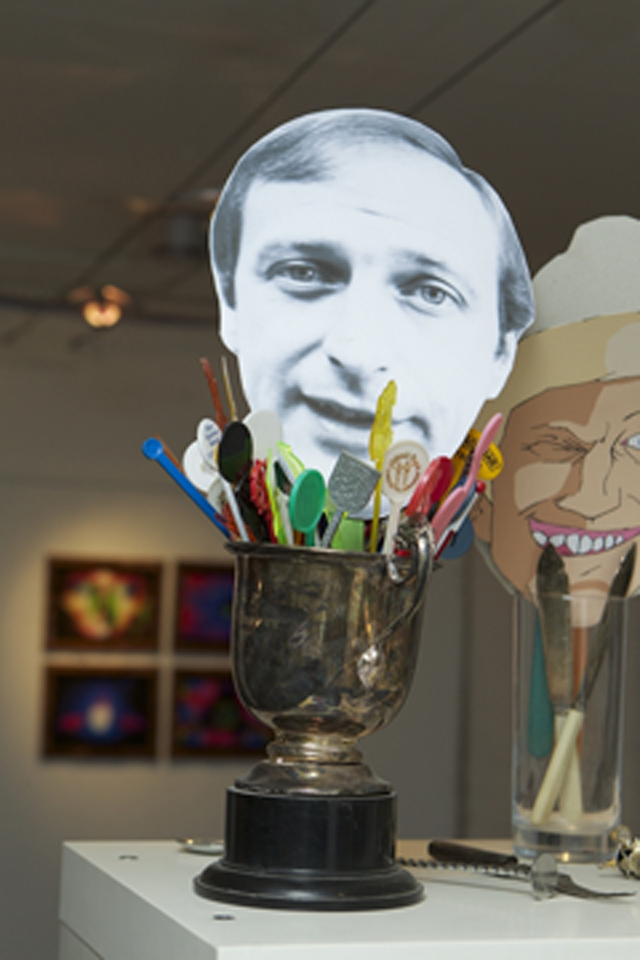 Adobe: What have you enjoyed most about working on this project?

Weyers: It's really been an amazing creative learning experience. To see how things have come together, with so many players involved, is truly mind-boggling. We wanted to create something that was true to Graham Chapman's diverse personality, and something that was totally new and outrageous. I think we've accomplished both of these goals with the help of some amazing animators. These guys have been such an inspirational group to work with and I just have to mention them:

Technology played a huge role in all of this too. In the end the whole film was pulled together on a Z800 HP workstation, holding an ultra-fast Fusion I/O Duo, and NVIDIA Quadro 5000 hardware-and the project would literally not have been possible without Adobe software.