Not the way they used to – like the ascendant rock star’s old girlfriend, we are yesterday’s news 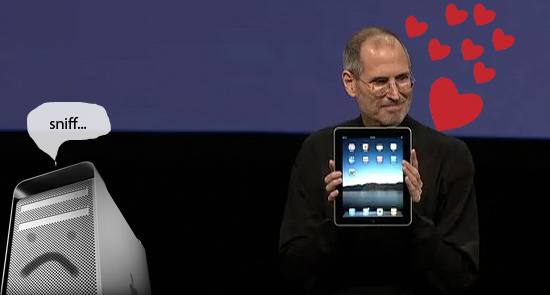 After writing this piece on whether Apple lamed out on the new Mac Pros, I got to thinking more about Apple and where we, as creative professionals lie in their priority list. Read that article for a detailed analysis of how Apple wasn’t aggressive with new technology, was late to market, skipped a bunch of new technology, and MIGHT potentially have decided to stiff-arm Adobe with the lack of NVIDIA GPUs at user expense. So where do we rank with Apple these days? Lets look at their motivations and actions.

The Changing Face of Apple

As a side note, remember how Apple changed their name from Apple Computer to Apple, Inc? That kinda tells you where their intentions lie. At the time, I was excited that Apple was broadening their horizons, thus hopefully guaranteeing a broader financial base to that we as creative professionals would have an Apple to count on for Macs and professional software.

Nowadays, however, consider how far that has gone – consider that ALL Macs are only about a third (I misreported as 25% the other day, sorry, my bad!) of Apple’s income. Checking here, while the good news is that Apple’s Mac sales were up 33% from a year ago (the dark days of 2009), Apple sold 3.47 million Macs for Q3. They also sold 8.4 million iPhones and 3.27 million iPads. Margins are estimated at 60% for those for iPhones and 30% for iPads.

Guessing that average selling price is around $200 for iPhone and around $600 for iPad (NO supporting research, just guessing here), that would mean around $120 gross profit per iPhone and nearly $200 per iPad. Considering how thin margins are in the computer hardware business, I’m betting iPad gross profit is not all that different from baseline MacBook profit. And considering how much more capital is tied up in producing MacBooks rather than iPads, where would you, as a business owner, want to put your efforts?

Overall, company wide, Apple’s gross margins were reported at 36.6% – so if iPhones (40% of revenue) are 60% and the average is 36%, I’d bet Macs are dragging down the gross margin numbers, wouldn’t you?

Tower sales were only up 18%, as compared to 40% and 70% in prior years. Portables are about half Mac sales. Notice a trend there?

Look at where their money is coming from – Macs are a 1/3. iPods are 11%. iPhone is 40%. Even the brand new iPads, in their first full quarter of sales that Apple can’t manufacture enough of, are already 16% of revenue.

So now I’m going into speculation mode – it has been reported that half of all Mac sales are mobile – I don’t know if that is by units or revenue, but work with me here. So half of 33% is 16.5%. Then we’re looking Minis, iMacs, and Mac Pros. I’d betcha Mac Pros are the least sold amongst that group – maybe 1/5 of those sales, optimistically? So that’d be around 3% of gross revenue? And the high end towers – optimistically at best maybe 1/5 of those, so that’s less than 1% of Apple’s gross revenue is coming from 12 core Macs. How much are they going to worry about that group?

Apple doesn’t love us anymore, not the way they used to. Fact. And if I had to guess, other than the Mac product managers, overall Apple (and Steve in particular) doesn’t care nearly as much about Macs any more either. Further, Steve and Apple may not be nearly in love with Intel as much as they were a few years ago. Picture Steve. Picture Steve obsessing about iPad, Flash support/Adobe, iPhone 4, AntennaeGate, iOS4.x, and all the things we picture Steve getting all serious about. Picture it. Now picture Steve getting into a screaming twist about tower Macs, PCIe lanes, USB 3.0 support, or FireWire 1600/3200. Wait – I can’t picture that – can you? Nope, not happening, drawing a blank.

We, the creative professional buyers, used to be a real, serious, double digit chunk of Apple’s income, so they really cared. Now, we are single digits of GROSS revenue – not profit, gross. And we buy (relatively) low margin (to Apple anyway – dunno what margins Intel is making) equipment from them. If it were your business – a steady, not hugely growing segment of replacement sales to a niche market of a low margin product, OR, a hugely growing segment of lower cost but DOUBLE the profit margin products that sell to ANYONE with $200-$800 to spend – what would YOU focus your efforts on?

Look at their actions – on the Mac Pros, our bread and butter workstations – delayed launch (over 500 days since last update!), no USB 3.0, no Blu-ray, same FireWire speed & bus, same PCIe configuration and speeds, potentially limiting GPU choices (Adobe & Da Vinci) – this does not look like their highest priority. Look at Final Cut Pro – last year’s update was nice, but late and disappointing. If it had come out 6 months earlier? Great. If they had updated it since then? Awesome. Neither is the case. Last round we got some better codecs (BIG win), the Share feature, VERY limited Blu-ray software (but no hardware!) support and…other features I can’t even think of right now, and I wrote the review for MacWorld. Other than a lot of little updates & fixes, that’s it. EDIT – now that I looked, oh yeah iChat Theater and speed changes and some other stuff. But still. New features appreciated, worth the reasonable update price, but…ho-hum. Surprisingly little big picture progress. And that is all the progress (other than minor .0.x updates) we’ve had since April 2007, when FCS 2 was introduced. To recap – that’s one mediocre decent version number upgrade in MORE THAN THREE YEARS. Yowza.

New products are a key indicator of a company’s focus. Look at where their effort has been on new products – new iPhones every year. New iPad, huge effort for Apple. iMacs? About 9 months ago. Mac Pros? About a year and half ago.

Apple doesn’t love us any more. It isn’t our fault – we still keep buying – and it isn’t like Apple is out to get us – they just found someone (or someones) waaaaaaaaay sexier than us. Like the sudden rock star’s old girlfriend – we’re history. They’ve moved on to bigger and better things. We’re as cool as we ever were, but they’re just GONE. They may say they’ll always love us, but look where they’re spending more and more of their time. They’ll still return our calls (sometimes) and they like us and all, but they’re busy.

ps – Apple folks – if you are reading this, I would LOVE to hear back from you. I’d love to hear the technical reasons why the iMacs and Mac Pros are the way they are this round, and why Final Cut is where it is, and while you don’t comment on future products, give me SOME hope that we’ll see some kick ass upgrades in the coming year. My entire career for 22 years has been based on leveraging Apple’s Mac technology to stay 2-3 years ahead of what my clients could do for themselves. Help me believe there is still a long term future in that. Seriously.

UPDATE – further thoughts – besides the new iMacs and Mac Pros that were introduced, Apple released a couple of other products – the Magic Trackpad and the new 27″ display.

Magic Trackpad – clearly a pull to integrate Macs with the new multi-touch iPod/iPhone/iPad world. But cool. But totally contingent upon software support – hey Adobe, gonna let me multi-touch to scale in Photoshop any time soon? Interesting multitouch possibilities for pros – can I use it as a virtual 3way color correction controller? What about virtual sliders? Can I put any kind of overlay on it to show me virtual sliders, virtual color correction controller, etc.? Hope so!

New 27″ display – with its 2560×1440 resolution (exactly double in both directions for 720p), it is a 16:9 display – a change from 16:10. Better fit for video content (consumer oriented). 16:10 allows for 16:9 content with menus on top and dock and other controls on the bottom – more pro friendly. Also, Apple is dropping BOTH the 24 and 30 inch models to replace with this one. Considering the resolution is almost identical to the larger 30″, with higher pixel density, at a lower price, this is all progress in my book. Dropping the 24″ – there are plenty of third party options, and dropping the lower res model isn’t so bad. But one perspective is to look at this as “simpler product lineup.” Product diversity is usually a sign of growing interest. Simplifying lineups usually indicates waning interest, IMHO.