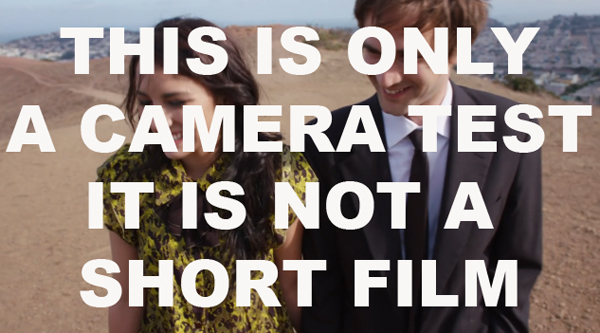 Here is my decidedly non-technical perspective on shooting with the Arri Alexa. I shot in Rec 709, not even Log C and I don’t care, it was so pretty. I didn’t measure latitude, and I didn’t have a chip chart either. I just pointed the Alexa and stuff and fell in love with the amazing image it made. The biggest thing the Alexa has done is freed me from the idea of needing to do endless camera tests to determine under what conditions my cinematic image will break down and show it’s harsh little DV roots. With the Alexa you just shoot, there is nothing to test, and nothing to hide.

Before I launch into this, I want to point you to Art Adams really lovely deconstruction of the Arri Alexa’s performance and aesthetics on a spec spot he shot for Ian McCamey.

I am not going to cover anything that remotely functions as an objective metric of camera performance. Instead, here is my entirely subjective, non-technical assessment of the Arri Alexa versus DSLRs. Anyone that reads my blog knows I was a fan the moment I saw the camera at NAB ’10. So that’s my disclosure, I have no connection or relationship with Arri. I’m just a fan who thinks that Arri has created a great digital cinema camera.

First off, a caveat. I think 1080P video shooting DSLRs are one of the most innovative technologies to come along for independent filmmaking in a very long time. The Canon 5D Mark II, and then all the others that followed, have allowed low and no-budget artists working in video to lose the final aesthetic difference (Depth of Field) that marginalized them as “videomakers” rather than identified them as practitioners of cinema. Film festivals, film critics and audiences routinely screen, critique and enjoy digital video originated movies that they can’t/ don’t differentiate from celluloid originated movies. It’s a done deal that we have Canon’s afterthought-for-photojournalists addition to the 5DM2 to thank for it.

However, digital video, in all it’s forms, is fickle and tricky, and the genera of the Video Enabled DSLR is plagued with the problems of video cameras: blown highlights, over-sharpening, meager color reproduction, etc. — as well as some of their own unique hair-pulling limitations. The intrepid DSLR cinematist* is forced to reckon with these drawbacks and plan shots accordingly, or, more daringly, just let the limitations of the camera show and not really worry about blown color channels or rolling shutters. More often though, the DSLR cinematist is far more interested in making his or her movie look like a “real movie” and will spend days color correcting and tweaking their picture to near death to make up for all the limitations of their revolutionary cameras. And how does the intrepid DSLR cinematist prepare for these unavoidable limitations? He or she tests and tests and tests. Then those tests are posted all over the web for other DSLR cinematists to evaluate and critique.

As far as cinema-making capacity, the DSLR innovation has created infinite ability, however that has, so far, only resulted in a flood of camera demo reels set to emo-y guitar music on Vimeo rather than an unstoppable wave of new and interesting cinema. The concept of a “camera test” has ceased to function as a means of evaluating a camera’s performance for a future project, and has instead morphed into it’s own on-line video genre. The camera test has become an ends unto itself, with some shooters known far and wide for their ability to shoot a great camera test.

This isn’t a criticism, I am kind of a fan of this new genre. I really appreciate getting to see how a particular lens performs under certain lighting conditions with a specific set of on-camera presets. I have created a few of these myself. But this genre isn’t the same as storytelling with moving pictures. And while the number of viewers on-line can get up into the tens of thousands, I suspect this will always be a niche audience of camera nerds and probably not break out into the mainstream. Although I could be wrong about that.

And that is where the problem is. When you take the DSLRs out into the world of narrative filmmaking, they function as a compromise camera. When treated under optimal conditions they produce stunning images, but those results require a lot of futzing and coercing, which means a distraction and impediment to the filmmaking process. The holy grail is a digital cinema camera that requires no special knowledge, settings or post conversion workflows to massage out a stunning image. What I want is a camera that shoots the digital aesthetic equivalent of film, and I’m not talking about spatial resolution.

So what does this have to do with the Arri Alexa?

My experience with the Alexa was exactly the experience I had been hoping for when I got my first Sony VX1000 way back at the end of the 20th century — the hope for a digital video machine that made images with a cinematic soul. It was the first time I picked up a camera, understood it’s operation nearly instantly and then started shooting in available light, at night, and recorded beautiful, soul-filled cinematic electronic images with barely perceptible noise, incredible vibrant color depth and stunning latitude. There was no negotiating with the camera’s limitations, no special sauce I had to dial into the buried menus, no kid gloves treatment to the images in post to hide the digital video roots.

The experience was enhanced with a few different Zeiss Ultra Primes on the front of the camera**. Just a note, everything looks better through Zeiss Ultra Primes. After shooting for an hour in the quiet night streets of Hayes Valley in San Francisco, me and my pals popped the SxS cards into a 17″ MacBook Pro with a high def screen and looked at the pixel-for-pixel images, instinctively trying to find the tell-tale flaws we are accustomed to seeing in digital video. We were all astonished at the noticeable lack of blemishes. No over-sharpened edges, no grey-on-black blocky artifacts in shadows, no bizzaro color renditions of skin tones. Just a faithful image, reproducing what we saw with our eyes and what the Zeiss Ultra Primes could offer to the imaging gods. It was a digital video camera with a cinematic soul. We went out the next day and tried it under blinding middle day sunlight and got the same results.

The camera itself is a work of art, a singe block of aluminum carved into a camera. Candy-like buttons and a stupid easy to use interface make set up remarkably joyful. It is just a cinema camera, nothing more or less. It feels like a movie camera on your shoulder, ergonomically weighty and balanced for smooth hand-held movie making.

Is it apple and oranges to compare a 100K worth of Arri/ Zeiss camcorder and glass to 5K worth of Canon?

Of course it is, and it would be disingenuous to suggest that there was a technical comparison to make. So I won’t. But I don’t think that’s the choice independent filmmakers should be considering. For the last million years or so, filmmakers determined to tell a rich, cinematic story didn’t actually buy and own their cameras, they rented them, or they hired a Director of Photography who had his or her own camera. Just like lights and props, cameras were a rental house line item on a budget. For filmmakers on a low budget, video cameras offered ability and economy, but not much in the way of cinematic image making. Having the Alexa available for a rental means that I can get a video camera that makes cinematic images simply, with no compromises or secret recipes to learn. I don’t think owning my own camera and lenses will actually make me a better writer, director or filmmaker, it will probably just make me a better photographer.

Take a look at this, it’s my Alexa “camera test”. I think it will be my last one.

*Cinematist is not a real word, but I think it should be.
**The awesome kit was generously loaned to me by Chater Camera in Berkeley. In retrospect I think it was a way of enabling a new addiction. It is hard to think about shooting with anything else now, and I think John Chater knows this.