“Sticks & Stones” is an inspiring short film about Sam, a 12-year-old boy who is deemed “different” by the children at his school. A talented artist, he is relentlessly bullied by his classmates. With thoughts of suicide and no friends to turn to, he withdraws to his art for solace. As a last resort he goes to the internet for help.

“Sticks & Stones” also provided the perfect outlet for veteran DP and DIT Steve Romano. Starting out in film, Romano never felt digital gave the proper skin tone with minimal noise. But as the world turned toward the ease and cost effectiveness of digital, he embraced the technology and is now shooting with the Sony F65. After shooting “Sticks & Stones” with the Sony camera, he feels the F65 achieves that proper balance.

“After winning the ECA award from local 600, [Director/Producer] Kate Rees Davies contacted me regarding a short she wanted to shoot about bullying (Sticks & Stones),” he said. “I was looking to shoot some more narrative and wanted to shoot something entirely at 24fps. With a limited budget, I felt this was a project that could put the F65 to the test. 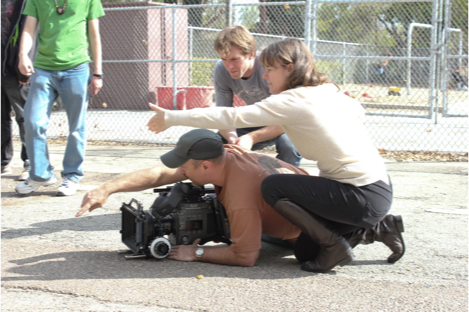 Sony’s F65 camera on the set of “Sticks & Stones,” a new anti-bullying film

I am amazed at the range of the F65. The color gamut and latitude are outstanding! The camera allowed me to capture the look I wanted under almost any lighting situation. When shooting inside a car I was able to expose for the actors and keep all the detail in the car windows on an extremely bright day.”

He added that shooting mixed light interiors with fluorescents, tungsten and daylight were easily correctable, and matching a sunny day with rainy day scenes was easily achieved in post.

“The ability to push and pull the raw data in post is unbelievable. F65 reminds me of the film days plus an even wider color gamut,” Romano said. “The camera was easy as I was switching parameters such as frame rates, shutter, ISO myself with no downtime. The internal ND filters also make changing exposure as simple as pressing a button. Using the high/low button was a great help with judging exposure. When shooting smaller projects with limited budgets, the Sony F65 makes my life quite easy as an indie DP and operator. The post workflow has become more accessible with the advent of RawLite and the SR codec. The F65 is the best high-end camera for low-budget projects.”

Born in the U.K., Rees Davies studied acting at the prestigious NIDA in Sydney, Australia. In 2009 she moved to Los Angeles to further her acting skills and to study directing at UCLA. Her film “Cell Phone” (director) played at the 2011 Cannes Film Festival.

“I first saw Steve Romano’s work at the ECA (Emerging Cinematographer Awards, LA),” she said. “His work was outstanding and I knew I had to work with him. I emailed him shortly after in October 2011, and then he flew to LA to shoot ‘Sticks & Stones’ in March 2012. He said he’d purchased the F65 and would like to use it on the film and I was more than happy to give it a try. It was the best decision I made.”

According to Rees Davies, “Sticks & Stones” came out looking “exactly how I wanted it to look.” “It was a gift having access to the Sony F65 in its infancy,” she said. “We shot the film in 3 days, inside and out, with a very small crew, with very little lighting and very limited budget. The camera didn’t let us down and the images portrayed in 4K were so crisp and clear, it will be difficult to shoot on anything else and we plan to shoot the next project with the F65 again.”

Rees Davies added that, “Having the ability to work with the professionals at Sony’s Digital Motion Picture Center on the Sony lot in Culver City “allowed us to get the most out of the F65 and was of great help to this project. The entire DMPC team was so supportive. Seeing the images in true 4K on their 25-foot screen made all the difference. The viewing quality was exceptional.”