A few months back, I wrote a review of fish-eye management software from ProDAD called DeFishr.  Never ones to rest, ProDAD has followed up in record time with DeFishr on steroids – this time called ProDrenalin.  In addition to fish-eye reduction, ProDrenalin adds stabilization, CMOS rolling shutter removal, color correction, noise reduction, and preset looks to the package.  It is a one-stop shop for you to take your action-cam footage to the next level – just about any level you like. 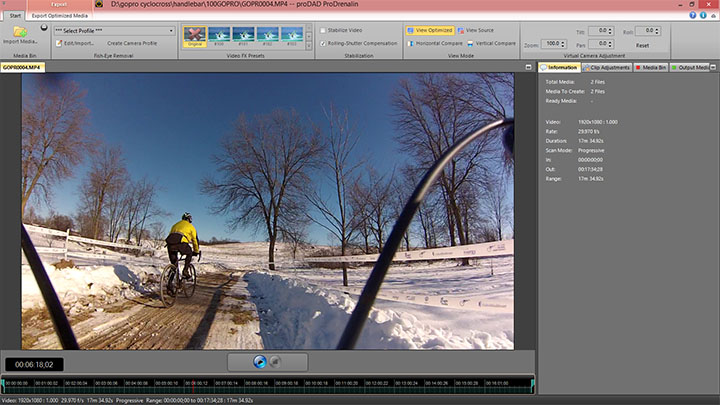 Like other ProDAD titles, ProDrenalin is currently Windows-only, and eschews the normal Windows interface, replacing it with a custom skin that you might or might not like.  I haven’t quite made up my mind personally, but the unfamiliarity of the interface didn’t stop me from getting lots of interesting work done.  All of the options are arrayed across the top of the screen, and are split into two tabs labeled “Start” and “Export Optimized Media”.  To get started, drop (or open) a piece of footage into the huge viewer window.  You play your footage in the window, and in a nice touch, you can add and change almost all of the effects while the footage plays and see the results previewed immediately in real-time (noise reduction being the lone exception.) 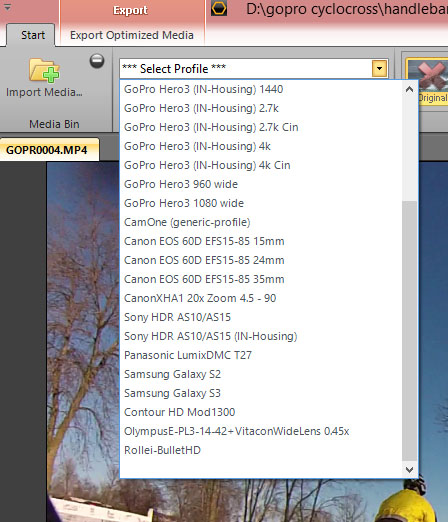 First effect in the line is geometry correction, with presets for over 20 cameras, from the ridiculously popular (e.g., GoPro in all kinds of configurations, all the way up to 4K) to the obscure (Rollei BulletHD, anyone?)  Interestingly enough, when I went through all of the presets, often I found a preset for some other camera made me happier than the one designed for the GoPro3 that I was using.  It's very much a matter of personal taste, and if you want to create a preset for a camera not on the list, you can do so.

Just to the right of Stabilization is a block with over twenty preset “looks” that you can effect your footage with.  In categories labeled “Contrast Looks,” “Crime Looks” and “Pop Art,” the presets vary from useful to way overdone.  Each of the looks can be adjusted with sliders for Contrast, Brightness, Saturation and White Balance, so a huge amount of variation is available to you. Unfortunately, there doesn't seem to be any way to save a custom look that the user creates, which would be a great addition for the next version of ProDrenalin.

Next are checkboxes for Stabilization and Rolling Shutter Compensation.  There are no adjustable parameters for either of these, but when you activate the Analysis mode that decides how much adjustment needs to be done to smooth out the video…

…ProDrenalin displays a six-line graph which details how much adjustment is being made in horizontal and vertical shift, roll, zoom, pan and tilt.  As the process continues, you can either watch the original footage, the optimized footage, or a vertical or horizontal split-screen for easy comparison of the two.  Finished effected footage has to be rendered before output, which was about a 2x-real time affair on my test computer, a quad-i7 Asus laptop.  I'm thrilled to report that ProDrenalin actually pushes all available processors to 100% while rendering, something that even Adobe Media Encoder doesn't always do.  Finally, the far-right corner houses an adjustment panel where you can manually adjust the “virtual camera”  if you aren't geting what you want from the presets. 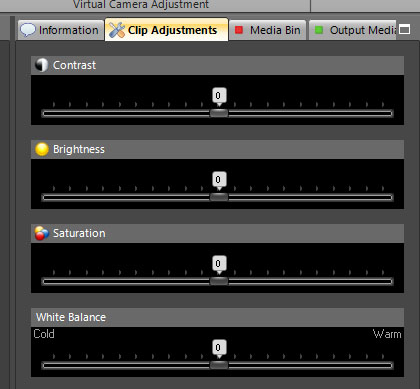 Common to both pages is a bin on the far right, with tabs for clip information, input and output media, and “Adjustments,” where sliders allow you to change the contrast, brightness, saturation and white balance of a shot.  Unfortunately, I didn't see any way to save these settings for future use.

After your tweaked shot makes you happy, click over to the “Export Optimized Media” tab.  The first thing you will find are selection boxes that determine the path you will send the new file to. This is where ProDAD's decision to “roll their own interface” gets a little sticky, because while I could easily set a path to send the new footage to, I could find no way to change the file name,and if I wanted to drop a second version of a file into the same folder, the only option is to overwrite the previous file – no adding “-01” to the filename or such.  This could be handled better.  This page is also where you choose your output quality level (low, medium or high, with the expected filesize differences) and choose between MP4 or Quicktime output.

You can opt to add one of three levels of “denoise,” which proved pretty useful in shots with dark areas.  This page is also where you choose if you want a split-screen output, which *is* written to the file if you decide to output it that way.   To provide torture-test footage for this review, I mounted my GoPro Hero3 Silver to an R/C car.  And it looks like this:

In what I consider a head-scratching design decision, after working left-to-right for the whole process, you must go all the way back to the left-top of the screen to find the bright red “start export” button to start rendering.  On the other hand, there is the ability to batch-process a pile of clips, so you can pretty much set ProDrenalin up, load up the output bin, hit the red button and leave the computer alone while it does its thing.  That's very useful.

To take a stab at a real-world application, I attempted a tracking shot of my wife driving our Nissan Leaf:

I have to think that a better R/C car driver could have gotten a better result, but on the whole the stabilization looks good.  Here's something a little faster, which includes stabilization, color effects and noise reduction:

fast on road from ProVideo Coalition on Vimeo.

Overall video quality is quite good, although like all other software-stabilization schemes, ProDrenalin gets its “room to maneuver” largely by zooming into the image to a variable extent.  This does tend to blur the image somewhat, although I keep reminding myself (and others) that GoPro shots tend to be “fillers,” not the meat-and-potatoes of a show.  As such, you can usually get away with some subtle imperfections, and the smoothness of the stabilization and color effects are an acceptable price to pay for the slight reduction in resolution.

As an updated program, ProDrenalin shows a lot of promise, with some rough edges that I'm sure will get smoothed off over time.  At a list price of under $50US, it is quite a bargain for all the power it has.  I'd certainly like to see it integrate into the Adobe Creative Suite and maybe adopt a more Windows-like interface, but neither of these gripes change the fact that ProDAD ProDrenalin packs a lot of power for a very affordable price.

Well, we’re going to round out this decade with the last “Let’s Edit” tutorial...