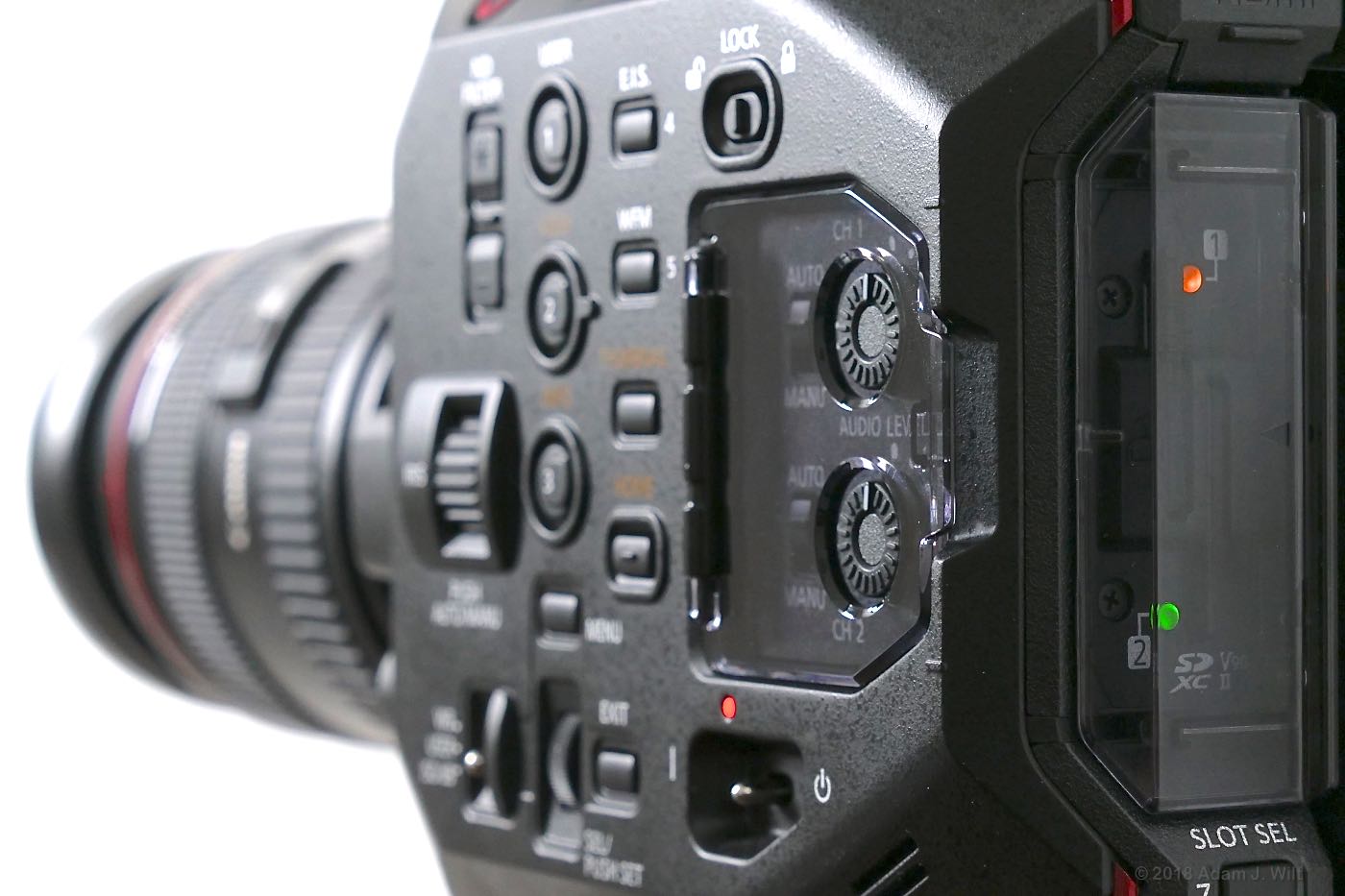 Panasonic’s $7,345 AU-EVA1 is a Super35mm single-sensor camcorder with a 5.7K Bayer-mask sensor, an EF lens mount, variable frame rates, and 14+ stops of dynamic range, recording on SDXC cards using log, HLG, and standard gamma renderings. Its compact, boxy body with removable rotating side grip is like that of the Sony FS5, but its images, menus, and touchscreen monitor make it feel more like a junior VariCam LT, with maybe a pinch of DVX200 added into the mix.

Before we dive into the details, I should mention a couple of controversial aspects of the EVA1: there’s no EVF, and the camera uses an EF mount, not MFT or PL.

The EVA1 lacks the rear-mounted flip-up EVF commonly found on similar cameras and its 3.5” touchscreen monitor is equipped only with a sunshade.

Many buyers will want to add a loupe to the monitor or use a separate EVF.

EVA1’s use of a Super35mm sensor and Canon EF mount instead of a 4/3” sensor and MFT mount—Micro Four Thirds, as on Panasonic’s AF-100 and GH-series cameras—may seem like a break with previous Panasonic affordable-camera tradition, but it’s consistent with the VariCam line: the LT ships with an EF mount.

The EF mount opens the camera to the large and growing world of EF-mount lenses in both cine and still-camera flavors. If EF isn’t your cup of tea you can swap the mount for a Wooden Camera PL mount (Wooden offers the mount with an installation service in case you don’t have a collimator handy to calibrate flange focal depth).

The operator’s side has a record start/stop button on the top bevel, up/down buttons for the three built-in ND filters (ND 0.6, 1.2, and 1.8), a broad and well-textured iris control wheel, and a three-position flip switch at the bottom. The switch determines what the smaller control wheel behind it adjusts: white balance, gain, or a user-selectable function such as monitor volume, shutter speed, or frame rate. Three big round user buttons, easily found by touch, echo those on the side of the VariCam LT (but lack that camera’s backlighting, sadly). Four smaller oblong buttons are arrayed behind them; they’re a bit more finicky to find sight unseen. Similar small buttons activate the MENU and let you EXIT the current menu level.

Both control wheels let you push them in: the IRIS wheel switches between manual and auto iris, while the small wheel’s click selects the current menu item.

A LOCK switch lets you lock out your selection of side-panel buttons to prevent fumble-fingered activation. Two audio gain pots poke through a flip-open cover and can be twiddled with a fingertip while the cover is closed. Opening the cover lets you grab the knobs between two fingers, and exposes separate AUTO/MANUAL switches for each channel. A recessed flip switch at the bottom, just below a red power-on LED, switches the camera on and off.

The rear of the camera has two SDXC slots behind a flip-open cover. Each slot has a status LED: green for “OK to yank the card”, yellow for “this is the active card”, flashing yellow for “recording to this card; hands off!” Another assignable button sits below the slots, a red tally LED sits below it.

There’s a full-size HDMI port behind a flip-open rubber cover. Another cover opens to reveal a USB port for the AJ-WM50P Wi-Fi dongle and one for “service”. Similar covers protect a 3.5mm stereo headphone jack, BNCs for SDI out and timecode in/out, and a 12 volt coax power input for the supplied AC adapter.

Dual XLR inputs for mic or line-level feeds sit unprotected to the right.

Batteries dock in the center. The stock 7.3 volt, 5900 mAh battery nestles entirely inside the camera while larger-capacity batteries (8850 and 11800 mAh) protrude slightly. The camera’s cooling system vents through a grille just above the battery; a warm and gentle breeze wafts from the back of the camera, driven by a fan so quiet I had to struggle to hear it.

The right side has the mount for the rotating side grip, and sockets for the LCD monitor cable and the grip’s control cable. There’s also a focus hook at the top.

The grip itself attaches with a bayonet mount and rotates through a bit over 90º when a thumb release is pressed.

The contoured grip has MENU and record start/stop  for the thumb, another control wheel and a user-assignable button for the index finder, and a final assignable button on the inside where the middle or ring finger can just reach it. The grip is made of textured, hard plastic and has a padded adjustable strap.

The front of the camera has the EF-mount release button and another user-assignable button (there are nine total, scattered across the camera and grip) which triggers AWB by default. Dual built-in mics, a tally LED, and an ambient light sensor for auto-tracking white balance occupy a shiny panel at the top. A grille below the lens mount admits air for the cooling system.

The EF mount is the standard bayonet-mount style used on still cameras, not the far superior positive-locking breech mount found on the Canon C500 and the VariCam LT. Bayonet mounts use spring pressure to keep the lens aligned properly, and heavy lenses or the force of a follow-focus or focus motor can move a lens in a bayonet mount, wobbling the image and possibly throwing off focus.

Fortunately the springs in the EVA1’s mount are the stiffest I’ve encountered. I hung a relatively heavy (3.67 lb / 1.66 kg) 70-200mm f/2.8 zoom off the mount with no support rods, and it showed no tendency to flex or wobble.

The top panel of the camera is well equipped with 1/4” sockets for accessories, and for the top handle, which mounts using uses captive knurled knobs.

The top handle has two passive shoe mounts, 1/4” and 3/8” sockets, a mounting point on the right for a microphone holder, and three mounting points—front left, rear right and left—for the LCD monitor arm. A supplied shoulder strap threads through two lugs on the top handle if you want to rock it ENG-style.

The LCD mount is simply a stubby rod, clamped in any of eight positions by its own knurled knob. The LCD holds onto that rod using a friction clamp with its own knob; the clamp allows the monitor to pivot on two axes, with click-stops at 90º angles. 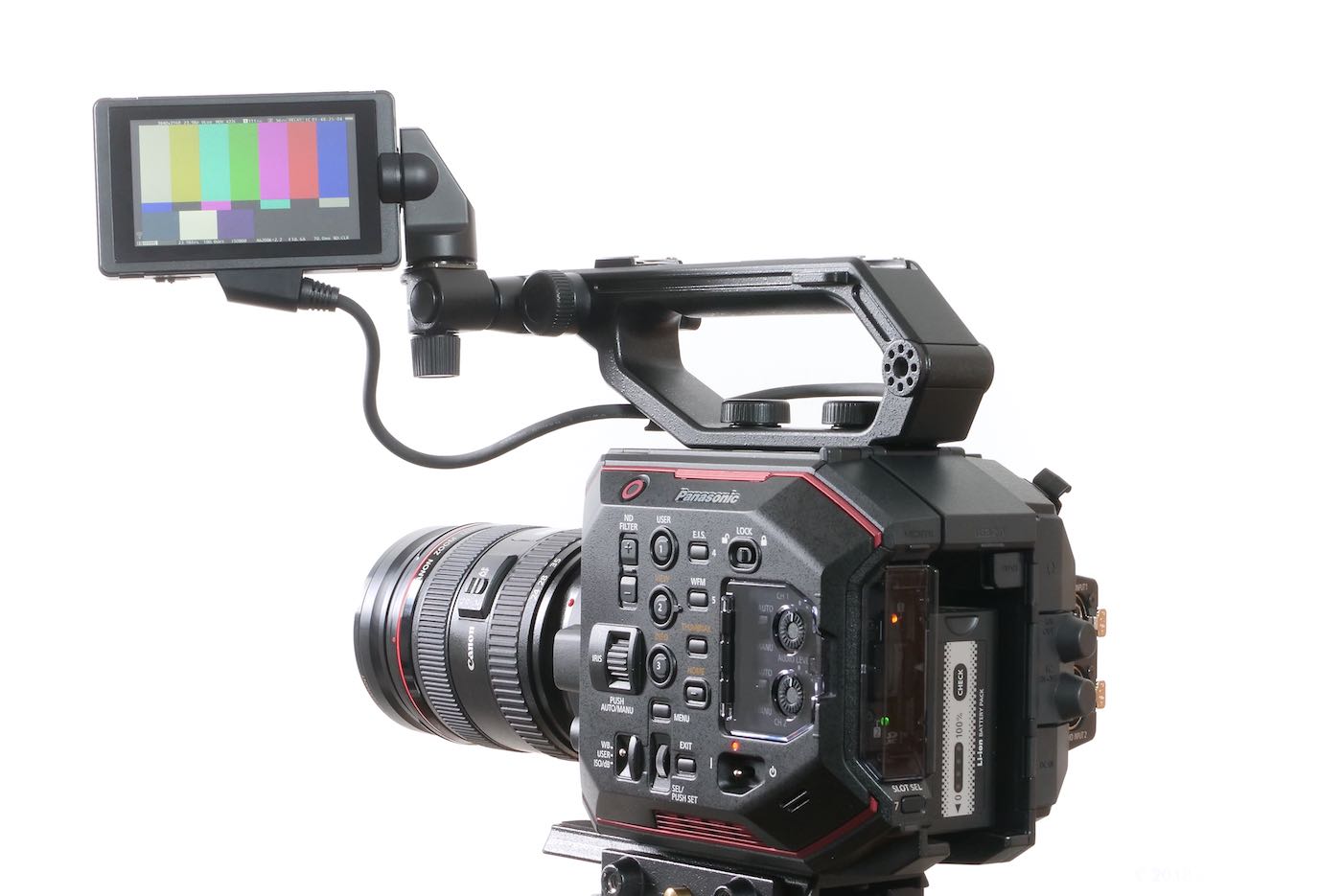 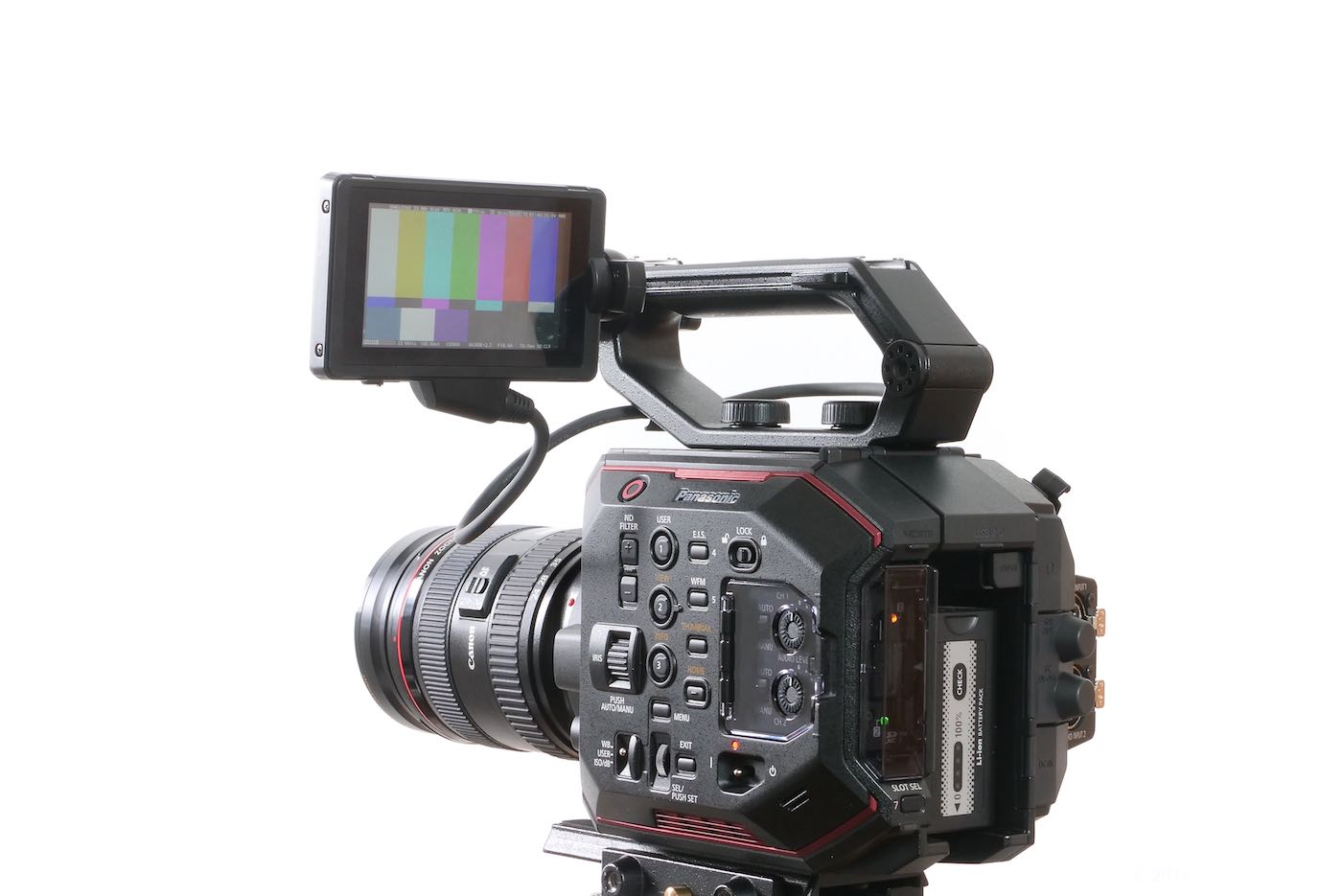 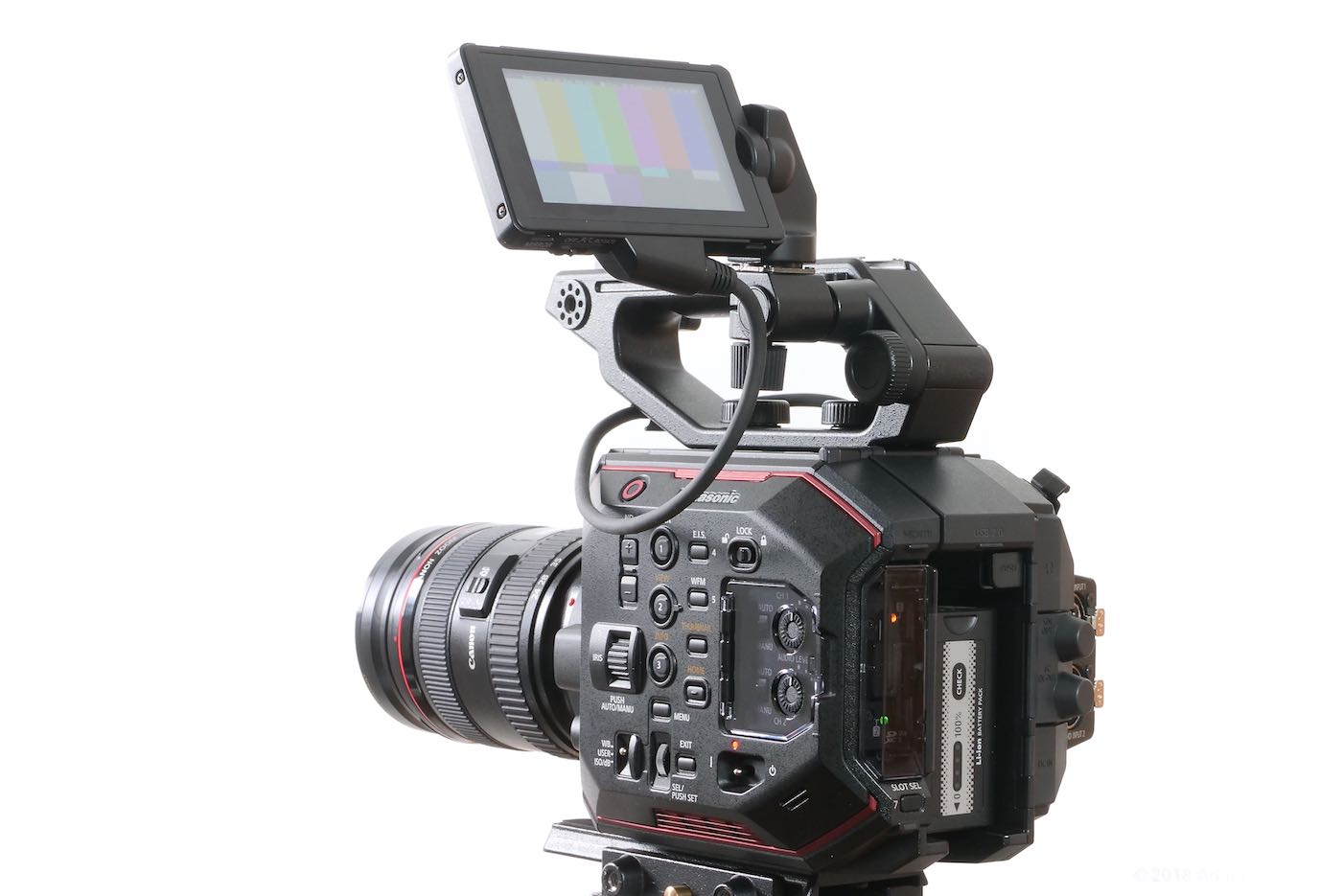 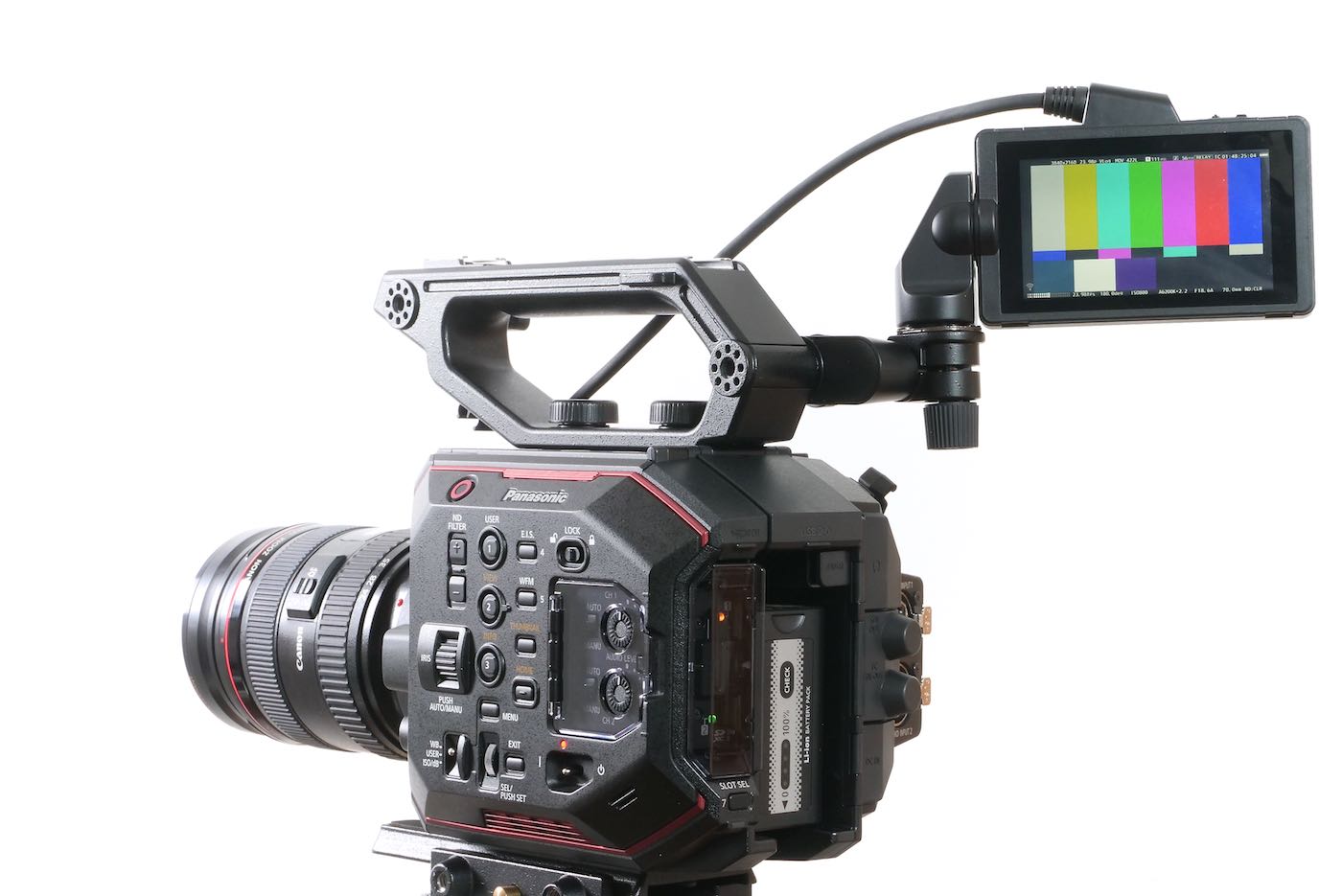 You can orient the joints so that the monitor won’t pivot if pressure is applied to it, say, by the force of an eyepiece loupe pressed to one’s eye. However there’s enough flex in the plastic assembly that I’m leery of recommending such a thing, for fear of overstressing the assembly and breaking it off. Apparently I’m not the only one; Zacuto’s EVA1 Z-Finder loupe includes a metal exoskeleton to rigidify the rig and make it robust enough for the harsh handling viewfinders are subject to (the EVA1 Z-Finder is covered in part 3 of this review).

The LCD mount’s attachment screw is a standard 1/4”x20, and the monitor’s clamp fits any 15mm rod, so you can dig into your box of camera-support Tinkertoys and mount the display anywhere its 15” / 23 cm cable will reach.

The monitor is a 3.5” 16×9 resistive touchscreen like the one used on the DVX200. Like most resistive touchscreens takes a fair bit of pressure to activate, but it’s unaffected by moisture and it can be used while wearing gloves. A slide switch next to the permanently-attached cable lets you flip or mirror the image as needed for any orientation.

The original Blackmagic Design 7-inch Video Assist 4K is one of my all-time favorite... 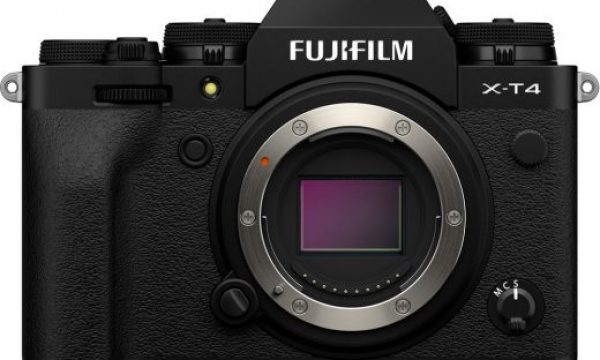 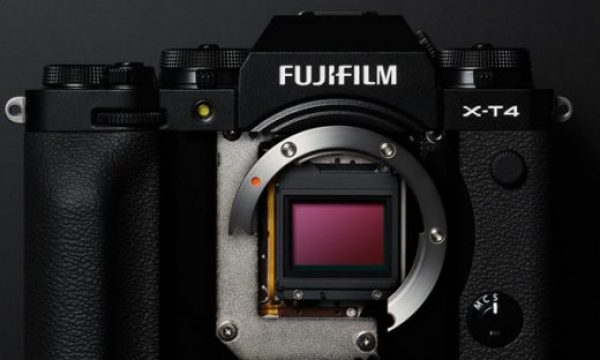 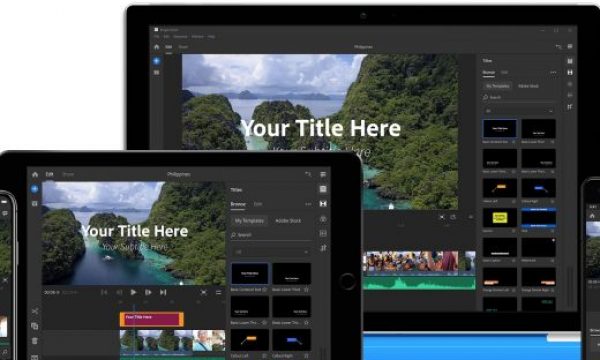