ProDAD is a company that really, really aims to please.  Over the last few years they have come out with software that addressed the realms of transitions (Vitascene), video stabilization (Mercalli) and action-video optimization (ProDRENALIN) in clever, albeit unique, ways.  Respeedr is a program that tries to add slow- and fast-motion processing to that list.  Unfortunately, I think it isn’t quite up to the standards of its siblings. 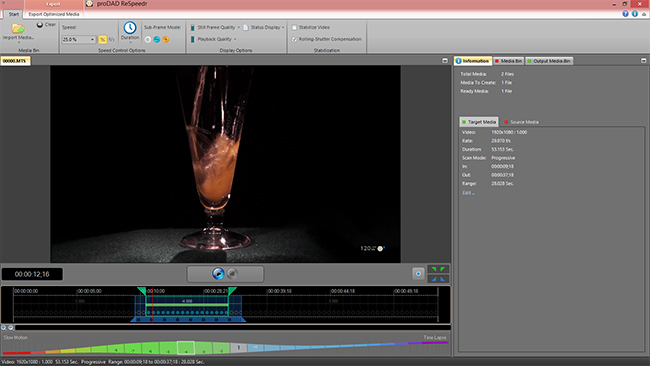 Respeedr is a fairly simple program, with all of its functions spread over two pages.  The first page is where you load a clip you would like to effect.  Once loaded, a timeline opens up near the bottom of the screen, and underneath that is the signature visual piece of Respeedr, a colorful ribbon-like control that allows the editor to select a clip speed that varies from 2 percent (1/50th) to 5000 percent of real time (50 times faster.) Scrubbing of the ribbon is fluid, and it responds with a flow and ease that might lull you into thinking that you can use the ribbon in real-time to speed-ramp up and down, back and forth.  Unfortunately, that isn’t the case. On the timeline there are two sets of brackets – the bottom pair selects the edit area of the loaded clip, and the top pair selects the subsection that you will be slowing down or speeding up.  There is no obvious way to ramp into or out of speed transitions, and the attached help file is pretty terse overall, giving the bare minimum of information on how to operate Respeedr effectively.  You can, however, select several sub-clips within the main clip for different speed treatments, although each section has to be isolated and have a speed chosen individually.

Respeedr offers three options for clip processing.  The first is called “frame-blending” mode, and it is pretty much what it says.  The next mode is called “optical flow,” and it is much more processor-intensive and yields what can only be called interesting results, depending on the subject matter.  The third mode is Auto, which apparently chooses between the two modes for the most effective results.  A series of colored dots on the timeline shows which mode is selected in any particular subclip; you can use both modes in a single timeline if you wish.  Other choices on this page include choices for clip stabilization and rolling-shutter reduction, and selectable levels of quality for both preview and output. 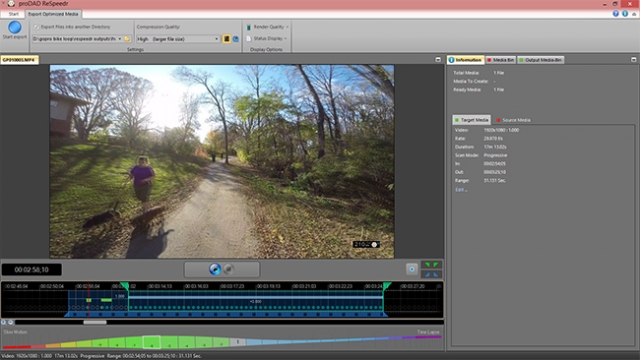 The second page is devoted to output of your effected clip.  The options here are limited to output compression level and a choice between MP4  and Quicktime encoding.  In all of their software, ProDAD had resolutely turned its back on the stock Windows interface, preferring a “roll your own” style.  However, in Respeedr this decision results in a user being unable to rename clips on output, meaning that if you want to test different iterations of a clip, you have to save each one in its own separate folder.  This is just mystifying.  Also missing is the ability to save the settings on a clip for later retrieval, which seems essential to me. 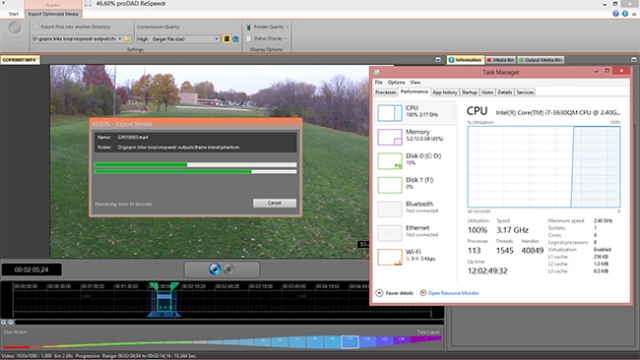 One thing I will say for Respeedr is that when it is encoding its output files, it maxes out the processors in your computer, unlike some other encoders I could mention (I'm looking at YOU, Adobe Media Encoder!) I did my testing on my trusty Asus G75VW gaming laptop, whose quad-core Intel i7 combined with an nVidia GeForce 660M CUDA-capable video card makes real-time editing on the road a breeze.

I took my GoPro Hero3+ on a bike ride around Madison’s Lake Monona in fall to collect test footage for Respeedr.  I also mocked-up a beer commercial in my studio, which gave me new respect for the real tabletop artists out there.  My third test clip was with the GoPro mounted on a DJI Phantom quadcopter, traveling from just above ground level to about 150 feet in the air.  Each scenario presented different challenges for Respeedr, as you will see in the video clips on the next page.

Of all the samples, the beer pour seems the most revealing.

Compared to just slowing the raw video down to 33% on the Adobe Premiere Pro CC timeline, I’d say that Respeedr’s frame blending made a subtle difference.  Optical Flow, however…wow.  That’s some funky beer! The effect is reminiscent of some of the shape-shifters from Star Trek: The Next Generation.

You can see some of the same effect in the bicycle clip, which leads me to believe that Optical Flow might be better suited to a predictable motion environment, not the randomness and chaos that both a poured liquid and a camera on a bike helmet can impart.  And in the bicycle clip, Frame Blending didn’t keep the people walking towards the camera from splitting into two halves as I passed.

If Optical Flow has a strength, I’d say it was just a tad smoother on the Quadcopter Liftoff, although not immensely so.

The results of my tests aren’t encyclopedic, to be sure, but in all honesty Respeedr would have to turn out top-notch output every time to make up for the oddness and omissions in its interface.  I’m going to chalk this up as Version 1, and hope for better to come from the ProDAD team.

I was provided with a copy of ProDAD Respeedr for the purposes of this review.  Nothing other than that software has changed hands between myself and ProDAD GmbH.

Well, we’re going to round out this decade with the last “Let’s Edit” tutorial...