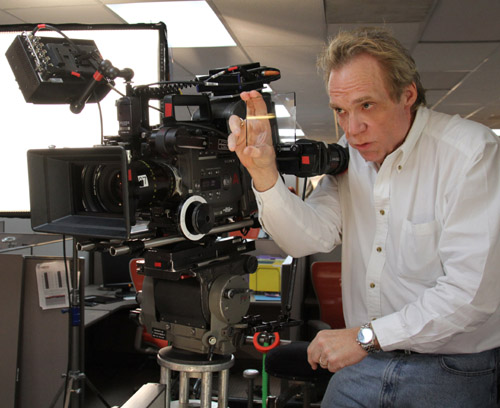 When cinematographer Brian Reynolds began prep for the Fox/ABC half-hour comedy series Better Off Ted, his challenge was to trim the budget and keep the quality look as well as the 11-hour work day. “One of my first choices was to add Schneider’s Hollywood Black Magic filters to our lenses,” says Reynolds.

“They are nothing short of amazing,” he says, enthusiastically. “They combine the smaller lenslets of HD Classic Soft and added Black Frost. What this does to the skin is amazing. When you are shooting HD, you are suddenly looking at an unfiltered image. Make-up freaks out. Same with set designers and actors. Adding the Hollywood Black Magic does away with that. It makes the image seem more like film.

“I use the full range from a quarter through a two,” he adds. “With other filters, if you put a two on, you would think it is seriously diffused. Not with these filters. It takes away the flaws but it isn’t over filtered. What’s more, when I shoot clean wide shots, the images cut beautifully with those that have been filtered.”

To capture the look for this series, Reynolds chose to switch from the Genesis camera to the Sony F35.”With the F35, I can shoot in hyper gamma,” he explains. “This way, our deliverable off the set is timed dailies. Without the need of a color timer to ‘guess’ where the look should be, I can deliver final color so that, when we get to post, the final colorist doesn’t have to go back and find stuff.”

Reynolds runs two F35 cameras at a time, each equipped with wireless transmitters, including a wireless remote for control of the f-stop. He can sit at the waveform monitor and adjust the stop without jumping on the radio, allowing his assistants to concentrate on focus.

“I’m really excited about this season’s look,” Reynolds says. “The Sony/Schneider combination is incredible. I’ve got a great, durable, camera that won’t fall apart despite how hard we push it over the nine months of shooting, and a top secret bag of tricks in the Hollywood Black Magic filters, that give me an even better look than the one that comes from a clean F35.”

In addition to trimming the budget and upping the look of Better Off Ted, Reynolds is proud that the company is contributing to the “greening” of production. Because of the way he has decided to shoot, they have also eliminated DVD dailies. “Anyone who has the key can go online now and watch, download or stream dailies from wherever that person happens to be,” he explains. “Not only do we save time, we’re saving money and the environment.”

Running for a term of nine months, the mentoring program will pair mentees with mentors who are production and...

Atomos announced the NEON Take Control promotion where users have the chance to claim back one of three items...