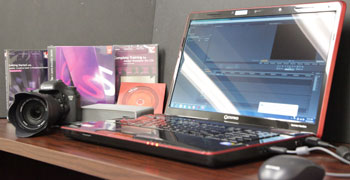 With Adobe Premiere Pro CS5 software, you can craft stories more efficiently, save time by integrating with Adobe After Effects® and Adobe Photoshop,® edit virtually anything thanks to broad native tapeless and DSLR camera support, and enjoy industry-leading 64-bit performance. Stepping up to the enhanced videoediting power of Adobe CS5 is now easier than ever.

When you work with tapeless media in Adobe Premiere Pro, you gain three key advantages. First, you save time because you’re able to start working with footage immediately-sometimes directly from the camera-thus eliminating the time-consuming transcoding and rewrapping process required when you use the same media in Final Cut Pro. Second, you maintain the pristine image quality of your source footage throughout the production process. Finally, because Adobe Premiere Pro does not convert the file to a proprietary format, metadata acquired from the camera is retained throughout the production process.http://www.webvideoguys.com/images/inline.jpg

Mixed formats and frame rates on the timeline
Mix and match media in a sequence, whatever the format, frame rate, aspect ratio, or resolution.

Media Browser panel for efficient tapeless workflows
See the contents of all mounted volumes on your system. Easily find content on tapeless cameras by using the Media Browser, which shows you the clips (with no extraneous files) along with a customizable view of all the metadata associated with the content. (Final Cut Pro discards metadata acquired from the camera, eliminating useful information and making it harder to locate and manage your assets.) You can open clips and image files in the Source Monitor
directly from the Media Browser panel.

3. Get industry-leading performance and stability from the new Adobe Mercury Playback Engine
Completely redesigned for blazingly fast performance, the Mercury Playback Engine in Adobe Premiere Pro CS5 is native 64-bit, optimized for multicore, and GPU-accelerated to provide an amazingly fluid, real-time editing experience. Be creative without worrying about the ramifications of additional effects and high-resolution content.

Multilayer performance
Combine P2, XDCAM, RED, DSLR, DV, and other footage on the timeline; play with the look and flow at full-frame rate; and view in real time on an external HD monitor. With configurations capable of supporting more than nine simultaneous layers and dozens of effects, the Adobe Mercury Playback Engine makes every production more creative and efficient.

Real-time effects
Enjoy unprecedented performance as you try various effects in your project. Adobe Premiere Pro CS5 requires a 64-bit operating system and works hand in hand with NVIDIA CUDA technology. The Adobe Mercury Playback Engine, offers phenomenal performance in software-only mode, but can also use NVIDIA GPU cards for a GPU-accelerated, 32-bit color pipeline. Most popular effects have been optimized to run on this accelerated pipeline-for example, effects like color correction, the new Adobe Ultra® keyer, and motion control all run in real time.