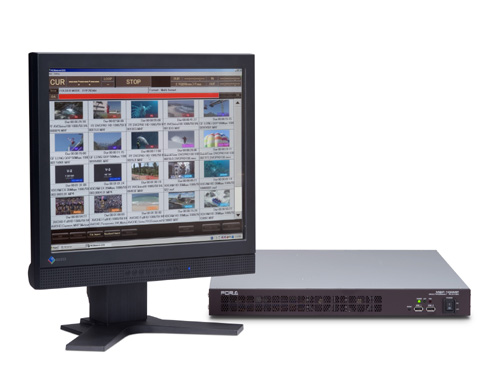 FOR-A, a leading manufacturer of video and audio systems for the broadcast and video production industry, will demonstrate an array of new products at the 2010 NAB Show in Las Vegas, Nev., April 12-15 (Booth C5219). The company’s theme of “Imagination to Creation” is taken a step further this year, with an emphasis on media management for ingest, storage, and manipulation of content that FOR-A customers work with on a daily basis.

“The key is to be flexible in light of constant technological innovations and to be ready for any task at hand,” said Mr. Hiro Tanoue, President, FOR-A Corporation of America. “At NAB, FOR-A will demonstrate products, technologies, and directions for its file-based and baseband lines including 3D and 3G-capable technologies for broadcasting and video production. FOR-A covers the gamut in order to bridge a customer’s use of existing and new technologies at the same time, like SD and HD, while also prepping for 3D and 3G.”

With a focus on file-based technologies, FOR-A is showing new products and technologies based on its MediaConcierge media management system. Leading the way is the MBP-100MP Multi Format Player with the MBP-100SXA MXF clip server. The MBP-100MP offers HD/SD-SDI baseband output of major file formats used in video production, including MXF files like GF, QuickTime (DVCPRO HD codec), XDCAM HD, and P2HD. With more powerful ingest software than the MCI-100, it allows a facility to collect multiple file formats into a central location, and then play them out as baseband signals.

Expanding FOR-A’s baseband product lineup are a number of new products. This year, FOR-A has seen the popularity of its compact HVS-300HS switcher grow with broadcasters in a variety of applications, from mobile production units to small control rooms. The new HVS-350HS HD/SD 1.5 M/E Digital Video Switcher is considered the “big brother” of the HVS-300HS. The HVS-350HS takes advantage of FOR-A’s modular concept with a 1.5 M/E design. It has more inputs and more standard features without dramatically increasing the size of the switcher or control panel. Also new, the HVS-300RPS adds a redundant power supply to the HVS-300HS.

For routing switchers, the MFR-5000 Series is making its U.S. debut at NAB as the core product in 3G-capable system integration. The MFR-5000 offers multi-format support of 3G, HD, SD, ASI, AES, and RS-422 signals. With 32 inputs and four screen outputs, the new MV-3200 Series multi-viewer supports mixed HD, SD, analog, and PC signals, and has a variety of on-screen features for a customized display environment.

The VFC-7000 HD Variable Frame Rate (Super Slow Motion) Camera offers high-speed playout and recording in full frame HD (1280×720) at up to 700 fps. Designed to be easy to use and at a very affordable price, it comes complete with camera head, main body, F lens mount, and recording component in one integrated package.

For facilities on a limited budget and with limited manpower that need a cost-effective virtual set solution, FOR-A will provide a demonstration of its VRCAM Sensor-less Virtual Studio System with 3D production capability at NAB. With FOR-A’s VRLINK, the system is now a more integrated part of the FOR-A production system workflow, especially when used in combination with the HVS-300HS.

For the growing 3D production market, the new CEQ-100HS Color Equalizer is an integrated processor that offers a number of tools to help calibrate and monitor live 3D video. FOR-A offers other 3D technologies including a stereoscopic camera, VRCAM, video switcher, clip server, and multi-viewers. See live demonstrations at NAB.

With its simple plug-and-play operation, the new IVS-200 Video Stabilizer and Automatic Video Optimizer corrects any video source, from live feeds to VCR tapes and DVDs, optimizing the video image and stabilizing shaky video in real time during capture or video that has already been recorded.